ST. GEORGE – Inspired by the actions of Nevada rancher Cliven Bundy and his stance against federal control of public lands, a rancher on the Arizona Strip has also declared the Bureau of Land Management to be an illegitimate agency and said he will no longer comply with or recognize it.

“I hereby cancel all my contracts with the BLM,” LaVoy Finicum, of Cane Beds, Arizona, wrote in a letter he sent to the U.S. Solicitor General following his decision to no longer acknowledge BLM or its policies. Thus far, he has chosen to discontinue paying grazing permit fees and to ignore when the BLM allows certain allotments – or pasture areas – to be used for grazing.

So what happened to change Finicum’s mind concerning the BLM and it’s oversight of public lands?

It was his time with the Bundys during last year’s standoff, Finicum said, adding he was one of the cowboys who rode with the Bundy family and their supporters down into the wash under Interstate 15 where federal agents had taken many the Nevada rancher’s cattle.

“After that incident, I had to do a lot of soul-searching,” Finicum said. “I realized that Cliven Bundy was standing on a very strong constitutional principle – and yet, here I was continuing to pay a grazing fee to the BLM.”

In short, the Arizona rancher’s own actions were inconsistent with his beliefs, he said, so he decided to follow in Bundy’s footsteps. 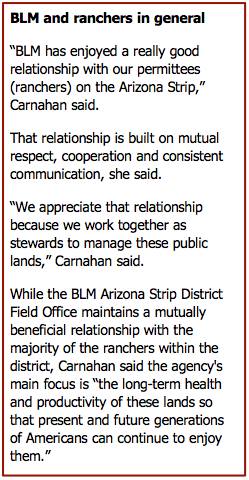 At that time the BLM became aware that Finicum had run some cattle onto a grazing allotment before his “season of use,” Carnahan said.

The BLM restricts when cattle can graze on an allotment, she said, in order to give the land a chance to rest and recover.

“Our mission and focus is the long-term health and productivity of that land,” she said.

Finicum contends that the federal government – and the BLM by extension – has no right under the Constitution to regulate use of public lands.

“Our stand is that the Constitution forbids them from owning and controlling … that land,” Finicum said. “… The states are the ones that should control these public lands.”

The BLM contacted Finicum by phone soon after it learned of his alleged trespass on the grazing allotment and, Carnahan said, it subsequently mailed him a notice of trespass.

“We’re treating this as a routine administrative trespass,” Carnahan said.

Finicum, who bought the grazing rights to the allotment in 2009, said he hasn’t run any cattle on that pasture due to a lack of water in the reservoir on the estimated 4,000-acre parcel. Prior to August, when he discovered there was water there for his cattle, he took advantage of the situation.

“As a rancher, that is my grazing right,” Finicum said, adding he isn’t going to allow some BLM bureaucrats to determine when he can and can’t exercise his grazing rights. “… I’m not under contract to the federal government over my ranch and my grazing rights.”

“Mr. Finicum has only been grazing on that allotment since 2009,” Carnahan said, “but that allotment has been in the federal public lands grazing program since Congress passed the Taylor Grazing Act in 1934.”

“These grazing rights are private property rights,” Finicum said, and as such, as natural rights, they are protected under the Constitution.

Natural rights are defined as those rights that cannot be granted or restricted by written law. An example used to illustrate the concept of such rights are those listed in the Declaration of Independence – life, liberty and the pursuit of happiness.

Such rights must be continually used and defended in order to be maintained, Finicum said.

However, through the Taylor Grazing Act, the federal government has usurped those rights as far as grazing is concerned, he said.

As for the fees Finicum said he will no longer pay to the to BLM, he has approached Mohave County officials about setting up a system whereby he could pay a production tax directly to the county. Unlike the BLM, the rancher said, he fully acknowledges county and state authority over the land.

Could the situation escalate?

With the stance Finicum is taking with the federal government, a question arises as to how far he is willing to go. Will things largely remain civil between him and the agencies involved? Or will things spiral in the direction of potential conflict as they did in Clark County, Nevada?

As the standoff between federal agents and Bundy resulted after 20 years of defiance by the Nevada rancher, it may very well be too early to tell what will happen in Finicum’s case.

While the Bundys maintain a mantra of “whatever it takes,” Finicum said, he approaches the situation the same he would when breaking in a colt: “As gentle as possible, as firm as necessary.”

Others are hoping everything remains civil.

“Our concern is we don’t have a situation like we did with Mr. Bundy over in Nevada,” Watson said. “… I’ve been assured by the BLM that’s not going to happen, but you know it’s hard to say what Mr. Finicum’s going to do.”

For now, as Carnahan said, the BLM is treating this as a routine trespass situation. A notice of trespass has been sent, though thus far Finicum has not responded to to it, she said.

The BLM has met with various county officials about the matter, including Mohave County Sheriff Jim McCabe, Carnahan said.

“He has expressed the same interest that BLM has,” Carnahan said of McCabe, “and the desire to find resolution without escalation.”

In an email to St. George News, McCabe said he sees Finicum’s nonpayment to the BLM as “strictly a civil action that would be addressed in an administrative fashion by those that have jurisdiction, which would be BLM/(Department of Justice).”

“(Finicum’s) got some valid points,” Watson said, “but currently the law is the law.”

A claim often raised by opponents and critics of the BLM, Finicum included, is that it is led by individuals appointed by the federal government who are thereby not accountable to the people as elected officials would be. Therefore, they cannot be easily removed from power as an elected official could be by a recall or losing an election.

“None of these people are under the power of recall,” Finicum said. “None of them is elected. None of them are accountable unto the people …. We have an empire that has risen up inside our country – unelected, unaccountable.”

The BLM does not agree with that assessment.

What demonstrates the accountability of the BLM to the people is the routine and regular meetings it has with federal, state and local agencies and elected officials, she said.

Ed. Note: The video attached to this story refers to the BLM sending Finicum a notice of trespass “earlier this month,” that month was October.

Perspectives: The American cowboy, a symbol of defiance