“As everybody’s aware, I think, within the community, we had an incident with a fixed-wing aircraft this week,” Jolley said. “It’s tragic.”

The Cedar City Regional Airport manager has been instrumental support for Upper Limit as they have responded to the tragedy, Jolley said, explaining to the City Council how the manager spent his anniversary helping the flight school with the crash and helped to recover the plane from the crash site.

“We were extremely grateful for how the airport’s run and the professionalism on the field,” he said, “(and the airport manager’s) professionalism in handling the scene of the accident, as he was the ultimate authority there to secure that scene.”

The aircraft was recovered and taken to Phoenix for further investigation to see if National Transportation Safety Board experts can better understand why the crash happened in the first place.

It is still unknown why the plane went down the way it did, Jolley said, but what is known is that shortly before the crash, everything was going along as normal.

“We know that, based on GPS coordinates and speed and altitude, that they were performing routine maneuvers for two instructors,” he said. “This was a new instructor that had had 1,200 hours – his ultimate goal was to acquire 200 to 300 hours with us and go on to be an airline transport pilot.” 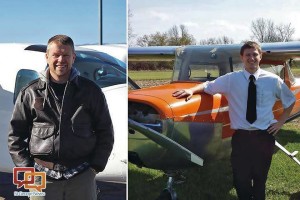 Nathan Stoddard, 24, was new, Jolley said, and it was his second day on the job. Stoddard was receiving instructor proficiency training so he could take on students the following day.

Southern Utah University grief counselors were brought in to Upper Limit Aviation’s staff meeting Wednesday morning to ensure staff members have the support they need to deal with the emotional components of such a terrible loss, Jolley said.

Originally, all of Upper Limit Aviation’s planes were grounded until after the funerals of the two men who lost their lives Monday, Jolley said, but flights are now set to resume on Tuesday instead of waiting for Stoddard’s funeral, which will take place later next week.

It was a concern that waiting too long would put rusty pilots back into aircraft, Jolley said, but he reassured the council no student will  be forced to fly if they do not feel at ease in the sky – not just in the wake of this tragedy, but as per company policy.

Carver will be laid to rest Monday, Jolley said, with a viewing Sunday evening that will be open to the public.

In lieu of flowers, a memorial fund has been set up in Carver’s name at Mountain America Credit Union.

Sphere One sold to new owners

“We welcome you with open arms,” Councilman Don Marchant said to the new Sphere One owner.

Blackburn has grown a flourishing business at Sphere One and has been a tremendous asset to the city, he said.

Matthews brings great fixed-base operator experience to the table, Blackburn said, and Sphere One employees are excited work with him on expanding the business.

Imperial Aviation is seeking to grow its company, Matthews said, and is happy to add Sphere One to its fold.

Sphere One will keep its name, along with all of its employees and branding, he said, but Imperial Aviation will work together to expand on services wherever possible.

“You’ve purchased into a growing, well-managed business,” Marchant said, stating Imperial Aviation had made a sound business decision by adding Sphere One to its corporation.

Cedar Memorials owner Mitch Dettamanti said he has received a notice from the city that his business owes back sewage payments, but Dettamanti told the council his father paid for the sewage line to be installed back in 1972 and the city never reimbursed him. Dettamanti requested a waiver of the fees, calling it an even trade between his business and the city

Though Cedar Memorials has not payed sewage expenses since the line was installed in 1972, Dettamanti said, he received a letter that stated the matter had only recently come to the attention of the city, along with a request for the back payment.

“It first came to the attention of the city in 1972 when they first hooked up to the sewer,” Dettamanti said. “We at Cedar Memorial were required to run a new sewer line that extended down 600 North and behind our business at Watson Engineering and Brad’s Food Hut there and the shop on the corner.”

At that time, an agreement was struck between Dettamanti’s father, who owned Cedar Memorials at the time, and Mayor Loren Whetten, he said.

The agreement from ‘72 was that the business would be reimbursed as the connection fees were collected from the other businesses in the area that used the sewer, Dettamanti said, and a signed agreement was transferred to his possession when he took ownership of the business after purchasing it from his father 15 years ago.

The fees were never collected, he said; or, if they were, Cedar Memorials was never reimbursed.

“The city has known that we have been hooked into the sewer,” Dettamanti said. “We are not trying to perform any theft of services or anything.”

Cedar Memorials has never been billed for sewer services since 1972, he said. Considering the costs incurred by placing the line for the city and the years the business has not had to pay sewer fees, Dettamanti said, he believes their output of funding has been recouped and he would be happy to start fresh and pay regular sewage fees as they apply to his business from here on out.

Council members asked Dettamanti to bring in the signed agreement as soon as possible for review so they can have a discussion at the next City Council meeting and make a determination.

The matter has been set for the Oct. 14 action agenda.