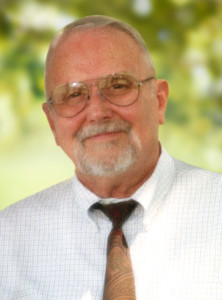 Our father, Richard K. Hanks passed away on September 28, 2015, in Washington, Utah. Dad was born in Eureka, California, on September 15, 1928, to E. Kay Hanks and Gwendolyn Lloyd Hanks.

After several years in California the family moved to Spokane, Washington, where he would spend his childhood.  Dad loved sports and was on the high school basketball team.  He had a fade-away jump shot that was so smooth it would make you cry.  He also pole vaulted and ran on the track team.

Dad loved spending his summers in Wayne County, where his father grew up.  He loved saddling up his horse and riding the trails over Boulder Mountain.  He always held Wayne County close to his heart and would frequently sing the song “I’m Going Back to Dear Old Grover”.

Every autumn when the leaves would start changing, dad would get that look in his eye and long to be in Wayne County.  Dad always fancied himself a Wayne County cowboy. Dad served a three year mission for the LDS Church in Zurich, Switzerland, and had his first taste of living abroad. 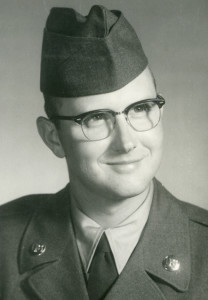 After his mission he served in the Korean War as a journalist.  He then followed in the footsteps of his older brother Wayne and worked for the U.S. State Department as a diplomatic courier.  There were not many countries in the world that Dad hadn’t visited and boy did he have some stories to tell!  Dad gained a love for Europe and started his college education in Germany.

He then returned to the states to finish his education at Brigham Young University. Dad was a huge BYU fan.  He followed all things BYU.  The day before dad passed away he was watching the BYU football game, hoping for a victory. It was probably the loss to Michigan that pushed him over the edge. Although dad was fiercely loyal to BYU he had a good sense of humor about it.  He’s probably laughing as he reads this.  Surely, if BYU games aren’t broadcast in heaven, he will opt out.

Dad had a great love for the gospel of Jesus Christ and loved learning. He earned a master’s degree in LDS church history and loved teaching others about the early church.  He started teaching seminary in Southern Utah, and then went on to teach journalism at Provo High and institute at Ricks College.  He then later taught Church History and Book of Mormon classes at BYU.

While teaching at BYU in 1971, he met Suzan Bundock and they were married 10 months later.  After marrying, Dad and Mom packed their bags and moved to Hawaii where Dad took a position as the director of the institute program at the University of Hawaii.  He loved the institute kids in Hawaii and has many fond memories from their time together.

While in Hawaii, Dad and Mom had their two eldest sons, Christopher and Ephraim. Shortly after Ephraim was born they moved back to the states and Dad had a desire to go back to school and get a marriage and family counseling degree.  After finishing that program at BYU, he joined a counseling practice and three more children were added to the family: Summer, Matthew, and Marc.

The family put down roots in Pleasant Grove, and then Lehi.  Dad continued to serve in the LDS church in various callings: bishop, bishopric member, and gospel doctrine teacher to name a few.  He touched the lives of many individuals through his service in the church. Many sought his counsel and advice and he was able to help heal hearts and lives.

After surviving many Utah County winters the Hanks family moved to Hurricane. Hurricane quickly became home and is where Dad spent the remainder of his life riding horses and helping others.  Happy Trails Dad!

Friends and family are invited to share condolences online. Arrangements and memorial tree planting have been done by Serenity Funeral Home of Southern Utah, 435-986-2085.