ST. GEORGE – The Dixie State men’s soccer team scored a goal just five minutes into the contest against Point Loma then held the slim lead for the remaining 85 minutes in a win Saturday at Hansen Stadium.

“We outplayed them in the first half,” said Dixie State head coach Josh Pittman. “In the second half, they played better, but we were able to get through it and get the win.” The win marks the first Pacific West Conference win of the season for DSU.

The Storm had a throw-in deep in Point Loma territory in the fifth minute. Defender Bryan Baugh launched the ball in from the right side and Jason Arollo headed it home for his second goal of the season.

“We have a unique talent on our team that very few collegiate teams have,” said Pittman. “Baugh can assist on goals with throws. That forces other teams to change their play. They can’t just kick it out of bounds to reset.”

Jorge Echavarria headed in a second Baugh throw 10 minutes later, but the Storm were whistled for a foul before the play terminated.

“I am not sure what the call was,” said Pittman. “We do not set any picks on that play. We just have movement. But one of their guys went down and they got the call.”

Both teams attempted three shots in the first half, but the score remained 1-0 at halftime.

Point Loma outshot the Red Storm in the second period 6-5 before Dixie got three shots in quick succession with 10 seconds left. All of the shots were blocked and the score remained 1-0. Dixie State’s defense had plenty of action in the second period, trying to keep a desperate PLNU team at bay.

“Arollo played well today,” said Pittman. “I can’t afford to take him off the field.”

Junior goalkeeper Bradley Trella came up big for the Storm in goal, turning away shot after shot to keep the Sea Lions out of the scoring column. Trella finished with five saves and recorded his second shutout of the season.

“He is an amazing talent,” said Pittman. “His play won the game for us today.”

Dixie State improves to 3-1-1 overall and 1-0-1 in PacWest play with the win. The Storm will be on the road next week at Dominican on Friday and Holy Names on Sunday.

Dixie State could not get anything going on offense after a mid-morning kick-off as the Storm were shut out by Point Loma, 3-0, on Homecoming Saturday at Hansen Stadium. With the loss, DSU fell to 2-4-0, 0-2-0 in Pacific West Conference play, while PLNU moved to 4-2-0, 1-0-0 in league play. 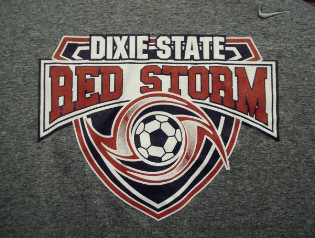 Both teams battled through a near scoreless first 45 minutes until the Sea Lions found the back of the net just 13 seconds before intermission when Michaela Maes scored from 25-yards out off a feed from Keagan Bolibol to stake PLNU to a 1-0 lead. Point Loma tacked on a pair of insurance goals in the second stanza, the first coming late in the 70th minute off the boot of Kaiti Freeberg, followed by another tally nearly 12 minutes later from Jennifer Ballez to put the match away.

Point Loma held a decisive 18-5 edge in shot attempts in the match, including a 10-2 edge on frame, with junior Alexis Torres and sophomore Courtney Fryer accounting for both Storm shots on goal. DSU keepers Stacie Gubler and Danica Nusink combined to make seven saves in a losing effort.

Dixie State heads back out on the road to California for a pair of PacWest matches in the Bay Area next weekend, beginning with a showdown at Dominican University on Friday, Oct. 2 at 4 p.m. (PT), in San Rafael. The Storm will then close the trip on Sunday, Oct. 4, with a match at Holy Names at 11 a.m. (PT), in Oakland.

Are you from Dixie? Senate committee favors university name change bill as demonstrators looked to kill it