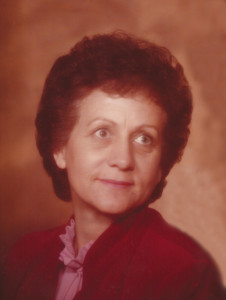 Ann Fonda Lester Beatty of Hurricane, passed away on September 25, 2015. Anna was born to Dee Lester and Nora Dalton on March 3, 1936, in Rockville, Utah. She married Clayton (Owen) Beatty on October 6, 1951, in the St. George LDS Temple. Together they raised four children: Dianna, Dennis, David and Deone.

Anna grew up in Rockville, Utah, and later moved to Hurricane after her marriage to Clayton. They then moved up North, living in Sandy, Utah; Twin Falls, Idaho; and North Ogden, Utah, before returning to family and friends in Hurricane where she and Clayton retired.

Anna was an avid gardener and landscaper. She could make almost anything grow and flourish, even in the worst conditions.

Anna was a loving wife, mother and grandmother. When family visited the first thing everyone asked for was a piece of grandma’s chocolate cake.

Anna was preceded in death by her parents; daughter Dianna; brother Gaylord and sisters Eleanor, and Shirley.

She is survived by her husband, Clayton; her children Dennis, David and Deone (Rick) Judkins; leaving behind six grandchildren and 16 great-grandchildren.

Arrangements have been under the direction of Spilsbury Mortuary, St. George 435-673-2454.