With freshman quarterback Josh Rosen struggling, the Bruins’ ground game picked up the slack to maintain coach Jim Mora’s perfect regular-season record against non-conference opponents. After Rosen’s 9-yard pass to Jordan Payton to open the drive, the next six plays were all runs by Perkins and Starks to set up the decisive score.

Starks ripped off runs of 31 and 22 yards on consecutive carries before scoring two plays later, finishing with 81 yards for UCLA (3-0).

Tanner Mangum drove the Cougars to the Bruins 42-yard line, but his fourth-down pass was intercepted by Myles Jack, allowing the Rose Bowl crowd of 67,612 to finally celebrate.

Mangum threw late touchdown passes to rally BYU to victory each of the previous two weeks. 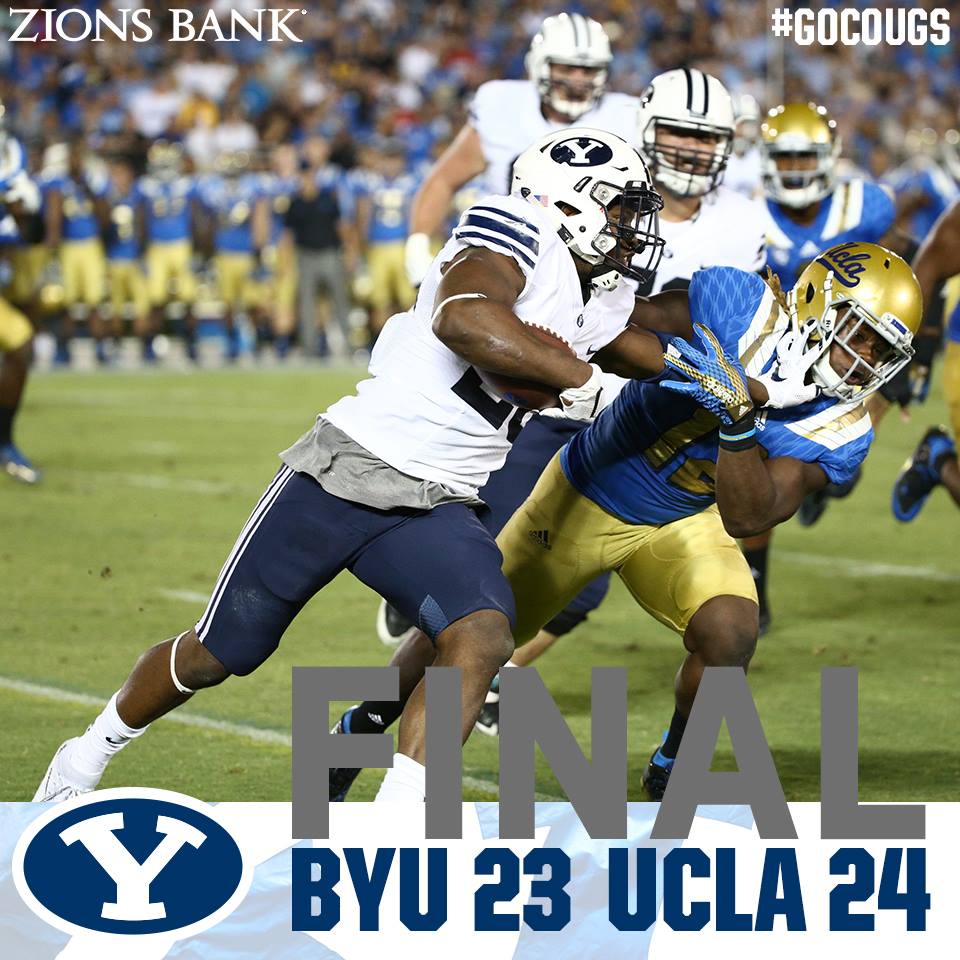 Adam Hine rushed for 149 yards and a touchdown for BYU (2-1), which dropped to 1-6 against top-10 teams under coach Bronco Mendenhall.

The highly anticipated meeting of freshman quarterbacks saw the 22-year-old Mangum decidedly outplay his more touted 18-year-old counterpart. Mangum was 30 of 47 for 244 yards, one touchdown and one interception, and added a reception for 4 yards when he caught his own batted pass in the fourth quarter.

Rosen was 11 of 23 for 106 yards with a 19-yard touchdown to Payton early in the fourth quarter, and three interceptions.

The Cougars frequently pressured Rosen and he threw all three picks in a miserable first half. Harvey Langi picked off Rosen at the 5-yard line to end a promising drive, and Kai Nacua came up with an interception in the end zone in the final minute of the second quarter.

That prompted UCLA to rely on Perkins to save the day. The Pac-12’s leading rusher last season set a career high, and had runs of 44 and 33 yards to set up touchdown drives before Starks delivered the final blow.

As Rosen largely struggled, his BYU counterpart Mangum delivered a confident and clean performance. Though he was sacked four times, Mangum made several outstanding throws, including his 14-yard touchdown to Mitch Mathews in the third quarter after UCLA tied the game at 10.

BYU opened the game with an 11-play, 71-yard drive that culminated when Hine bounced to the outside off left tackle for a walk-in 7-yard touchdown run. UCLA linebacker Kenny Young was ejected for targeting after leading with his helmet on a sliding Mangum during the possession, and initially refused to leave the field before sprinting to the locker room.

Michael Davis recovered a surprise onside kick, and though that extra possession did not result in points, it set the tone for an aggressive first half by BYU.

Those three turnovers by Rosen and a trio of three-and-outs by the UCLA offense allowed BYU to hold the ball for 20:29. Ka’imi Fairbairn and Trevor Samson traded field goals for a 10-3 Cougars lead at halftime.