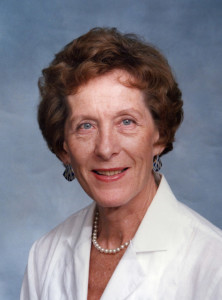 Doris Miller Snow, 91, was born in St. Anthony, Idaho, on April 24, 1924, to John F. and Mabelle Grover Miller, the last of five children. She entered eternal rest, with her three children by her bedside, at Rex Hospital in Raleigh, North Carolina, on Sept. 1, 2015.

Doris was reared in Idaho and Basin, Wyoming, during the depression years while her father worked the family potato farm. As a young girl she enjoyed singing, playing the clarinet, ice skating, swimming in the canal, riding ponies, gymnastics, and caring for her pets. With an interest in knitting she approached an experienced neighbor for instruction, then formed the “Knit-Wits” with some close girlfriends and began knitting sweaters for everyone they knew.

Expectation and remembrance of holidays, especially Christmas, made the long, cold winters tolerable. Family trips to Yellowstone and Shell Canyon were highlights during the pleasant months. Reunions were a time for hand churned ice cream and homemade root beer, taffy, fudge and bread. The family moved to Washington, D.C., during her high school years where her father worked as assistant to his brother, Sen. Bertram Miller of Idaho.

After completing Woodrow Wilson High, Doris attended Brigham Young University for a year where she met Leo Beman Snow, then to Ricks College in Rexsburg for a year, then back to Washington, D.C., to work for the War Food Administration. She and Beman were married during his second year at Temple University Medical School on December 22, 1944.

After the birth of sons Ron and Richard, the young family moved from Philadelphia to Upper Darby PA, while Beman was in his radiology residency. From 1950-52, the family resided in Great Britain where Beman served at Burtonwood AFB. Time there afforded the opportunity to immerse in the English history and culture with frequent trips in the countryside and the European continent.

Doris developed a life-long love for gardening, and enriched our lives with study of the piano. Fabrics and yarn from Liverpool were sewn into beautiful jackets and skirts and knit into heirloom sweaters. After returning to the U.S., daughter Patricia was born. The next year the family moved to Morganton, North Carolina, where Beman began his radiology career and Doris quickly adapted to life in the foothills of the Blue Ridge Mountains.

With Beman she made many memorable flying trips in Arrow 65J within the US and to Canada, Alaska, Mexico, the Caribbean, and Central America, and accompanied him during his volunteer service aboard the hospital ship USS Hope in Colombia, South America. Together they traveled to professional meetings around the world, noting the art, history, culture and architecture of each place.

Beman’s retirement in 1985 prompted a move to Raleigh NC to downsize and be closer to children. In addition to her existing crafts and talents she became active in academic and cultural pursuits, took classes at the local colleges, and served with Beman as docents at the NC Museum of Art. After nearly 69 years of marriage Beman preceded her in death.

She loved her husband and family, was an excellent homemaker, never met a stranger, and will be remembered for her many talents, ready smile and quick wit.

She is survived by her children Ron (Sharon) of St. George, Utah, John Richard (Deborah) of Cary, North Carolina, and Patti Shanley (Gerry) of Raleigh, North Carolina, seven grandchildren, 10 great-grandchildren, sister Evelyn Harrison of Arlington, Virgina, brother Fred Miller of Savannah, Georgie, and beloved Shi Shi. Condolences can be sent to the family in care of The Cypress of Raleigh.

The family wishes to thank Dr. Steven Liebowitz, his nurse Lori, and the many doctors, nurses, and staff members at Rex Hospital for their kind and compassionate care.