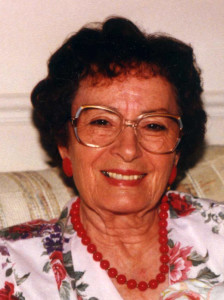 Lorraine Mason Johnson was taken home to the God who gave her life on September 15, 2015, at the age of 96.

As she later wrote to a grandson, “I’m sure it won’t surprise you if I say that I have always had a testimony of the Gospel of Jesus Christ…I was born into the church and I gradually learned its’ teachings at home, in Sunday School, and Primary. I had no reason to ever doubt it and I can say that I know it is all true.”

Lorraine lived her life accordingly. She attended Brigham Young University and taught first and second grade and music in Aurora. She later wrote, “What a thrill it was to guide the children through their first years of learning, to watch their progress and feel their enthusiasm.”

After the bombing of Pearl Harbor in 1941, Lorraine and some friends journeyed to Seattle where they helped the war effort by working for Boeing. Lorraine met Staff Sergeant Grant Douglas Johnson, also a Utah native, at church. 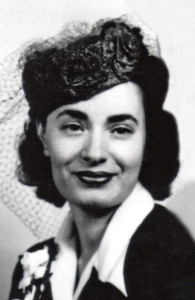 “As soon as I saw him, I knew I wanted to get acquainted with him,” she later wrote.  They dated and became engaged. Grant was assigned to a B-17 crew and flew 38 missions from England over Europe. After Grant’s safe return they were married in September 1944 in the St. George Temple. Grant and Lorraine settled in St. George, Utah where Grant owned and operated the Dixie Jewel shop on Main Street.

She loved her family and they loved her. Her grandchildren were the most important part of her life and they will miss her loving support. She also had many adopted grandchildren and she loved and appreciated all they did for her.

Lorraine loved serving in church callings and especially enjoyed visiting teaching. She was a substitute teacher in the St. George elementary school for 30 years and also taught seminary. Lorraine loved to write and won awards for her work (for example, an essay sharing fond recollections of trips to Fish Lake) from the Utah Writer’s Guild among others.

Lorraine also loved working on family history. “I think that I appreciate the Gospel more now, than when I was younger,” she wrote to a granddaughter. “I also feel a greater gratitude to my ancestors who accepted the Gospel many years ago and remained faithful through the sufferings demanded of the early pioneers. That is perhaps the main reason that I have spent years collecting the histories of my ancestors and distributing them. I hope by doing this that they will know of my love and gratitude to them. All that I am I owe to these wonderful people and to their faithfulness as well as to the Lord who has blessed me so much.”

We express a special thank you to the staff and residents of Spring Gardens who blessed our mother’s life the past few years. We appreciate all you did to help her go from independent to assisted living. You made the transition easy.