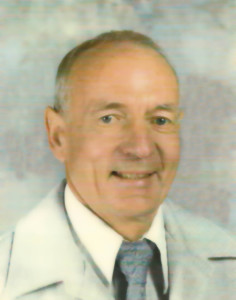 Kent was a World War II veteran and served in the Pacific Theater. He married Eula Blake on September 25, 1948. He and his wife, Eula were both raised in St. George. They were residents of Beaver until 1962, where he taught school.

Kent and Eula raised their family primarily in the Las Vegas area where he taught elementary school until he retired in 1986. In 1996 they moved to Ivins. In the past few years they both resided in an assisted living residence in St. George.

Kent loved to play his guitar and sing songs, pick pinenuts, and watch sports. When he retired, he took up running and entered many races and got his whole family involved in running and racing.

He is preceded in death by his wife, Eula in March 2013. He is survived by their five sons and their wives-Kipling and Gwendolyn in Las Vegas, Kris and Jessie in Toquerville, Steve and Suzanne in St. George, Loren and Susan in Las Vegas, and Kurtis and MaryJane in Sandy.

The family wishes to acknowledge the special care given by the staff of Beehive Homes Assisted Living and are grateful for the hospice services provided by Intermountain Senior Care.

Arrangements have been made under direction of Spilsbury Mortuary, 435-673-2454.