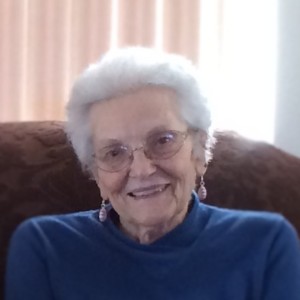 Wanda was a professional woman and worked as a secretary, bookkeeper, and receptionist for many years. She loved doing crossword puzzles and watching mystery shows on television. She was an avid reader. When she was younger she sang in her church choir.

In 2001, she moved to Centennial Park to live with her daughter Lucy. Wanda loved her family and was dedicated to making a meaningful contribution to them in her everyday life. She took many people into her heart as honorary children, grandchildren, and great-grandchildren. She was particularly fond of little children and they brought her a great deal of joy, especially in her last days.

She is survived by her daughters Lucy (Thomas) Knudson of Centennial Park, and Mary Gillen of Mountain Ranch, California; her son Robert Moore of Boise, Idaho; two sisters, Lucille Hull of Sherman, Texas, and Peggy Hamilton of Lott, Texas;  two brothers, Arthur Henson of Madisonville, Texas, and Joseph Henson also of Madisonville; eight grandchildren and 19 great-grandchildren. She is preceded in death by her parents, spouses, and brother John Henson.

The family wishes to give special thanks to the hospital staff and hospice services of Intermountain Health Care in St. George for the caring and kindness shown during Wanda’s illness.