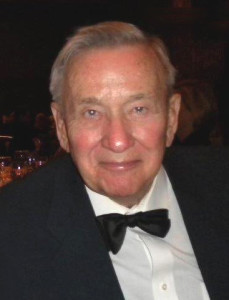 Warren T. Christensen (Chris) was born in the small South Dakota town of Viborg on September 17, 1926.

Although he lost his father at the age of 18 months, he became one of the shining stars from Viborg and traveled the world over as a Merchant Marine

He practiced medicine for thirty five years in San Jose, California. One of his favorite memories being how he successfully delivered a one-pound baby girl who grew to adulthood.

Shortly before retiring, he met his future wife, Lucia in Washington, D.C., while attending his annual Republican Inner Circle meeting. Their first date was at the Fifth Estate Restaurant in the National Press Club.

They married in Las Vegas on the Fourth of July and settled in St. George, Utah, where they shared 20 happy years.

Sometimes life takes us full circle, and Warren is now on his way back to South Dakota to his final resting place. He will be accompanied by his wife, Lucia and their son, Michael.