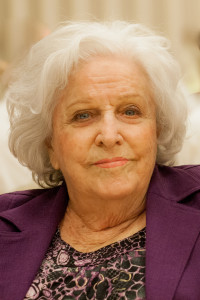 Joey grew up the oldest of four children in St. George.  She came of age during the great depression which perhaps helped form the soft spot in her heart for the less fortunate.

She graduated from Dixie High School, and it was in that original “Dixie” building on the corner of Tabernacle and 100 South where she first laid eyes on and fell in love with a handsome, athletic boy from Santa Clara.  They were married in the midst of World War II, and their first child was born while LeGrand was serving in the US Army Air Corps.

Joey lived with her mother as a young war bride and LeGrand did not return home until after the Japanese surrender in 1945, having flown multiple missions on the crew of a B-25 bomber in the Pacific. 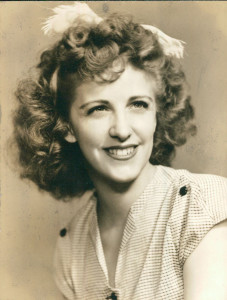 After the war they lived in St. George and in 1952 established their permanent home beneath the sycamore trees in Santa Clara.  They became the parents of six children.  Their daughter Susan died as an infant.

Joey was dedicated, heart and soul, to her husband and her children.  She was always there for them, even during the years when she was a working mom.  She attended LDS Business College in Salt Lake City and worked for many years as secretary to Rudger McArthur in St. George City management and the water and power department.  Using her outstanding skills in shorthand and bookkeeping, she played a key role behind the scenes in many important developments in the city’s history.

In the meantime, she never missed a beat cooking full breakfasts for her family every morning and daily dinners that would qualify as “Sunday Dinner.”  As the wife of a farmer and rancher, she often served those dinners late at night (always hot.)  And the lunches she sent out to the ranch were envied by all the cowboys.

She was determined and innovative.  When she wanted a new couch, she learned how to reupholster.  She was excellent at refinishing wood furniture and could sew anything.  She worked hard and played hard, and was legendary among her grandchildren for all the adventures she created for them.  She loved quilts and was a connoisseur of cloth.  Her closets were always full of fabrics collected for the countless quilts she made.

She was an active member of the Church of Jesus Christ of Latter-day Saints, serving in many callings, but she never had to be called to perform her greatest deeds.  Those acts of kindness and compassion were made to down-on-their-luck travelers on the weary road of life and were not noted in meetings or from the pulpit, but in the hearts of the individuals whose lives she blessed through her gift as a true Christian.

She continued to make life bright for those she loved and those she met along the way until a stroke incapacitated her five years ago.  Yet even up to her last breath, when she passed peacefully last week, she retained her sense of humor and her characteristic interest in others more than self.

The family expresses deepest appreciation to Beehive Homes and Applegate Homecare and Hospice for their sincere personal and professional care.

Arrangements have been made under the direction of Spilsbury Mortuary.