CEDAR CITY – Wednesday night’s Cedar City Council meeting was a roller coaster of emotions that ranged from pride and gratitude to grief and honor – leaving few in the room untouched by the swell.

On Saturday, a 2-year-old girl went missing from the 300 S. 200 West area of Cedar City for about an hour-and-a-half. Though police confirmed to the media the toddler was found, there was no information released about what happened.

Councilman Don Marchant, who said he resides in the neighborhood where the child went missing, recounted the events as they unfolded:

I’m a neighbor across the street, and all of the neighbors in that neighborhood that were home came together and they went house to house. They went backyard to backyard. They went over two and three blocks and they covered all the backyards and garages and whatever they could find – and I am telling you, people were concerned.

A community notice was issued via the Everbridge emergency notification system. People from other parts of Cedar City began to show up, Marchant said, asking the Cedar City Police Department and Iron County Sheriff’s Office, who were operating the search, how they could help.

“It became quite an emotional experience for some of us as we watched parents and grandparents deal with this,” Marchant said. “And having children of our own, and grandchildren, the longer it lasted the more concerned you became.”

Marchant’s voice trembled as he described the sense of urgency in the matter and worry that the little one could have somehow been kidnapped or even fallen into one of the ditches that run water through the city.

After some time searching, neighbors gathered in prayer, Marchant said. Almost simultaneously, Officer Travis Carter announced to the crowd that he had to go back to a house where no one had been home earlier.

“He walked around back, and there was a doggy door,” Marchant said, “and the little girl had crawled through the doggy door, had found herself some chocolate somewhere and had eaten that and had fallen asleep – and through all the calls and all of the concern that went on, she was sleeping soundly in that house next door, not knowing that the concern was there for her.”

With more than a few tears shed, those who had become involved in the search for this little girl breathed deeply with sighs of relief for her and her family, Marchant said. He commended the first responders and Cedar City residents who responded so swiftly to the calls for help.

There is something  special about the community of Cedar City, he said.

“This is one of the neatest communities in the world,” Marchant said. “And, you have to live here for about 10 minutes to find out.”

A champion in the midst

“The games hosted more than 6,500 athletes from 165 different countries that competed in 25 different sports,” she said, “and the 2015 Special Olympic World Games were the largest international games undertaken ever in the United States.”

While in LA, Pate also claimed the bronze medal in AT 4×100 Relay event, Wilson said.

Pate has been competing in the Special Olympics since 2011.

Pate is in better physical shape and has enjoyed the opportunities to compete and make new friends, according to a statement that was read aloud to the room by the mayor on behalf of the gold medalist.

Pate was honored by the City Council and administration with a certificate of recognition for outstanding citizenship and community representation.

In keeping with the night’s theme of outstanding community citizenship, activism and heroics, Cedar City Police Chief Bob Allinson stood before a captivated audience and announced the loss of CCPD K-9 Pajko, who died Tuesday evening.

Choking back tears, Allinson apologized to the room for his obvious display of emotion. He explained that Wednesday’s assemblage of Iron County law enforcement’s K-9 handlers and Friends of Iron County K-9s had already been planned before the 5-year-old police dog died.

At that time, Pajko’s handler, Officer Jason Thomas, was invited into the room by Allinson, along with CCPD K-9 Duco and his handler, Officer Clint Pollock. Though Thomas hung back in the hallway outside the council chambers, Pollock and his muzzled, furry friend made their way to the podium.

Allinson explained that the gathering Wednesday night was a twofold opportunity to recognize outstanding citizenry and K-9 assistance.

The first purpose of the assemblage was to pay tribute to a Cedar City couple, Dennis and June Schnarr, and present them with something called a “challenge coin.” The Schnarrs covered all of the costs associated with a lifesaving surgery Pajko had undergone only months ago.

Typically, challenge coins are reserved for officers who go above and beyond the call of duty, Allinson said; but every so often, the department awards one to a community member who has made an impact on community law enforcement in a tremendous and positive way.

“People were attached to this dog, the officers as well, that (wanted to) recognize and appreciate what Dennis and June did for us,” Allinson said. “But, at the same time, we had Pajko pass away last night.”

The second purpose of the gathering was to honor Cathy Williams, an Apple Valley resident, who has spearheaded a program to help vest police K-9s across the nation with bulletproof gear that would keep them safe in dangerous scenarios.

The request to honor Williams came to him last-minute from officers who had learned the Schnarrs were to be honored, Allinson said. It made perfect sense to him, he said, so he jumped on the opportunity.

“(Williams) started vesting Washington County K-9s,” Allinson said, “where she wanted to invest money in a type of ballistic vests for these dogs to protect them.”

The program grew in popularity and eventually spread to all of Southern Utah and then throughout the state. Now called Vesting America’s Police K-9s, the program has become a nationwide success, helping protect police dogs in every region of the country.

They are the lightest vests available on the market, at 2-1/2 pounds (the average dog vest out there weighs 6-8 pounds); they are bullet proof & stab resistant, and are rated level IIIa (can stop up to a .44 magnum point blank, and stop up to a 4″ blade). They are also flame resistant, and made of Kevlar. These vests are manufactured by Bullet Blocker of Boston, Massachusetts. TREAD Armament can get them for $750 (US Dollars).”

The first vest for the four K-9s in the Iron County region was ceremoniously placed on Pollock’s dog Duco, who stood in for Pajko.

Each dog has a badge that Velcros to their vest, Williams said, but when she learned of Pajko’s death, she called the manufacturer and canceled all of the orders.

“Normally we’d be giving out placards like this that would say ‘Police K-9’ on it,” she said, tearing the service dog placard off of her service dog, Hunter’s, vest. “But when (Pajko’s death) happened, we immediately called our provider and told them to cancel the order, don’t even send them out; we’re making changes. They are going to say along the bottom, ‘In honor of Pajko … Aug. 12, 2015.’”

Allinson thanked Williams for all her efforts and told her he would have an actual plaque for her soon, but with the shorter notice, it hadn’t arrived yet.

The mayor also presented each of the honorees with a Cedar City pin bearing the town logo as a way of expressing gratitude for all they have done for local law enforcement. 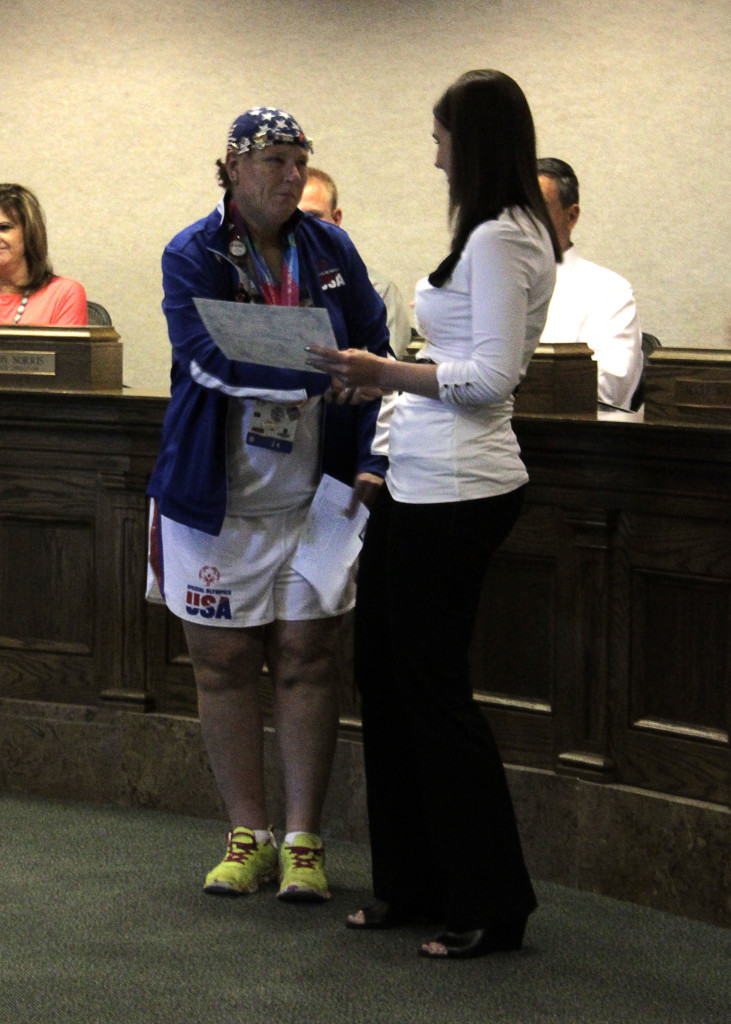 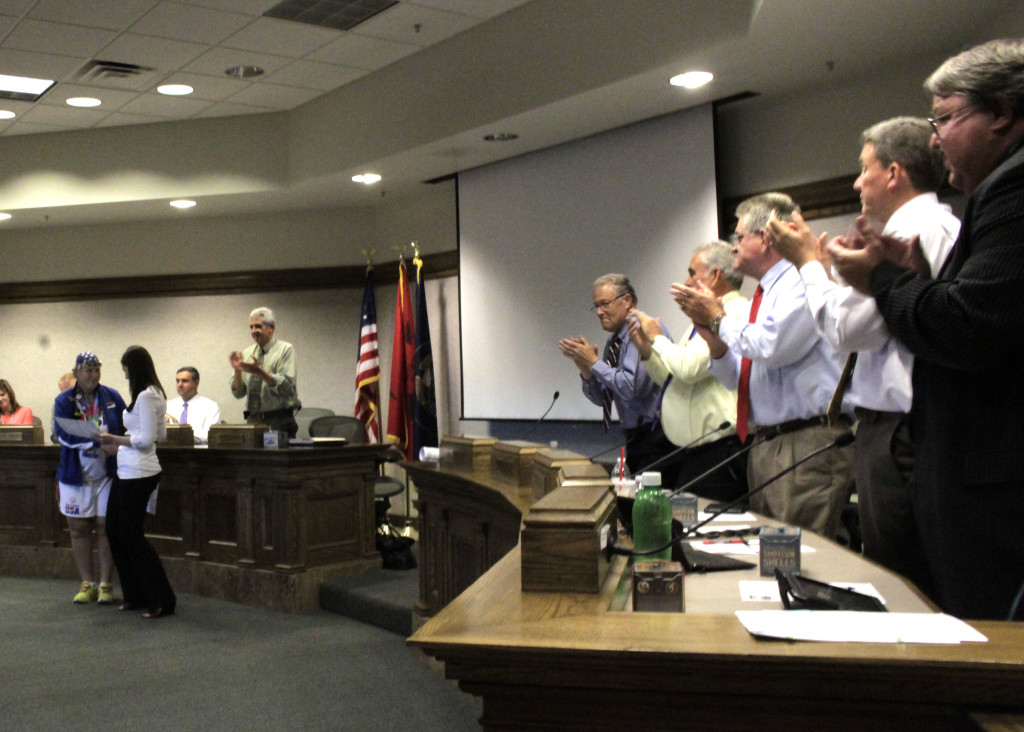 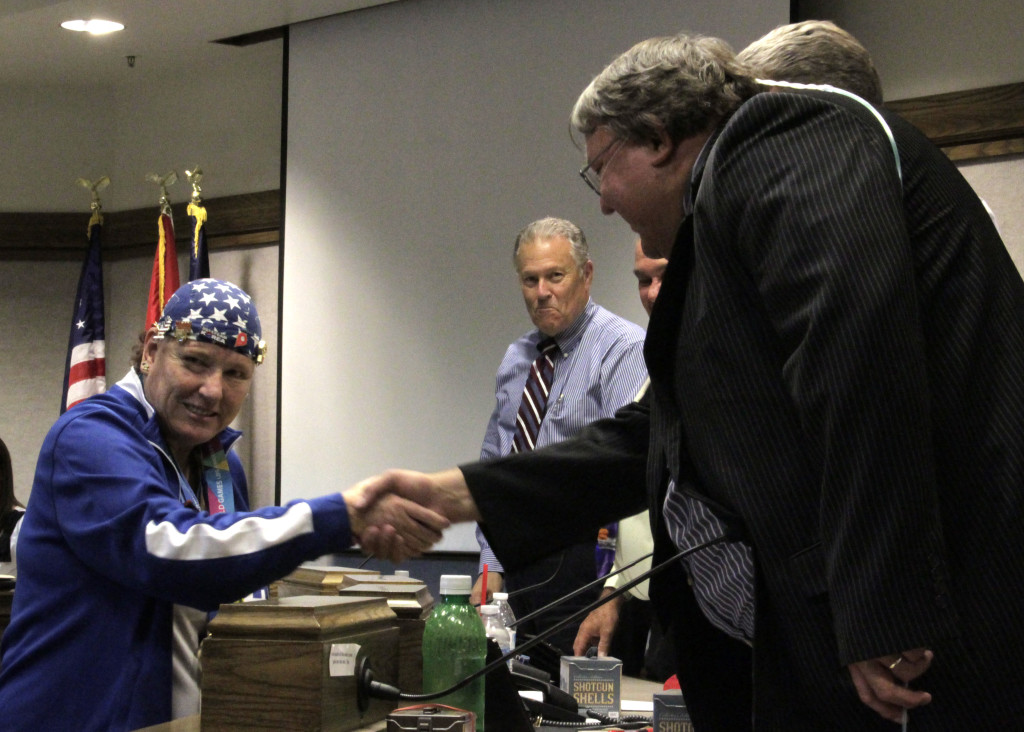 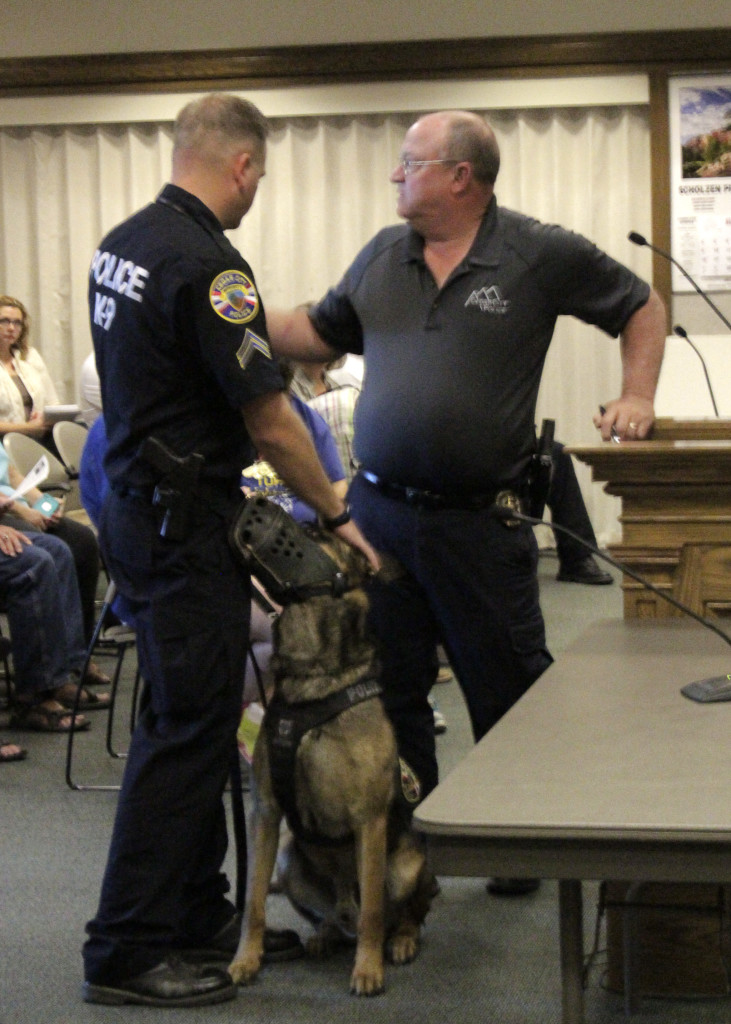 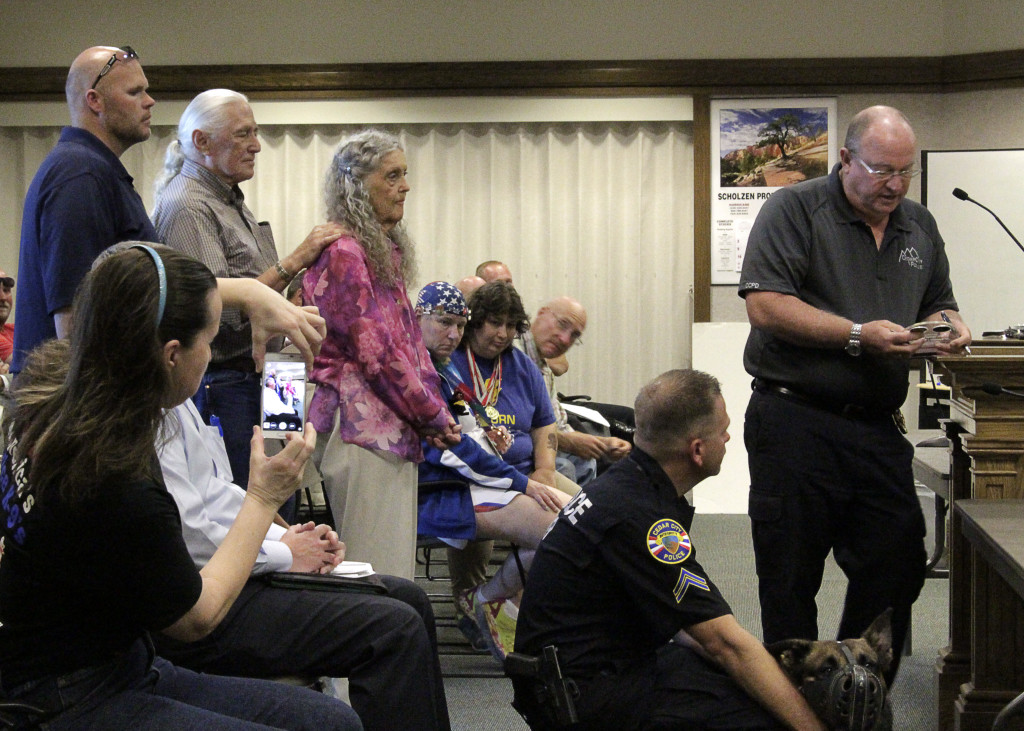 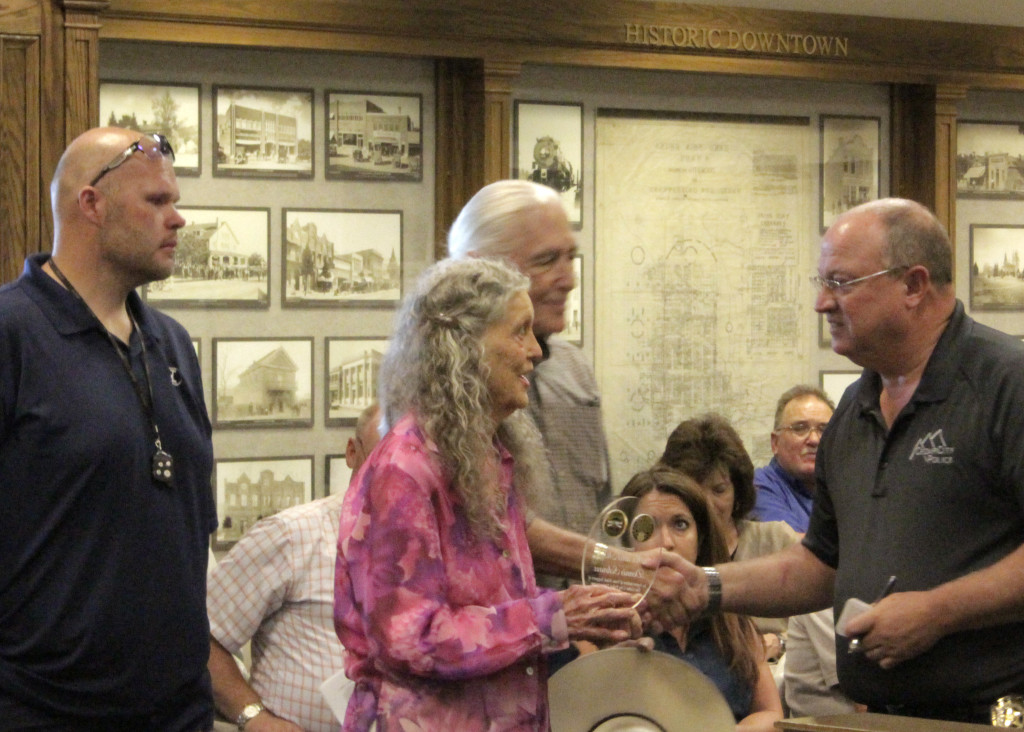 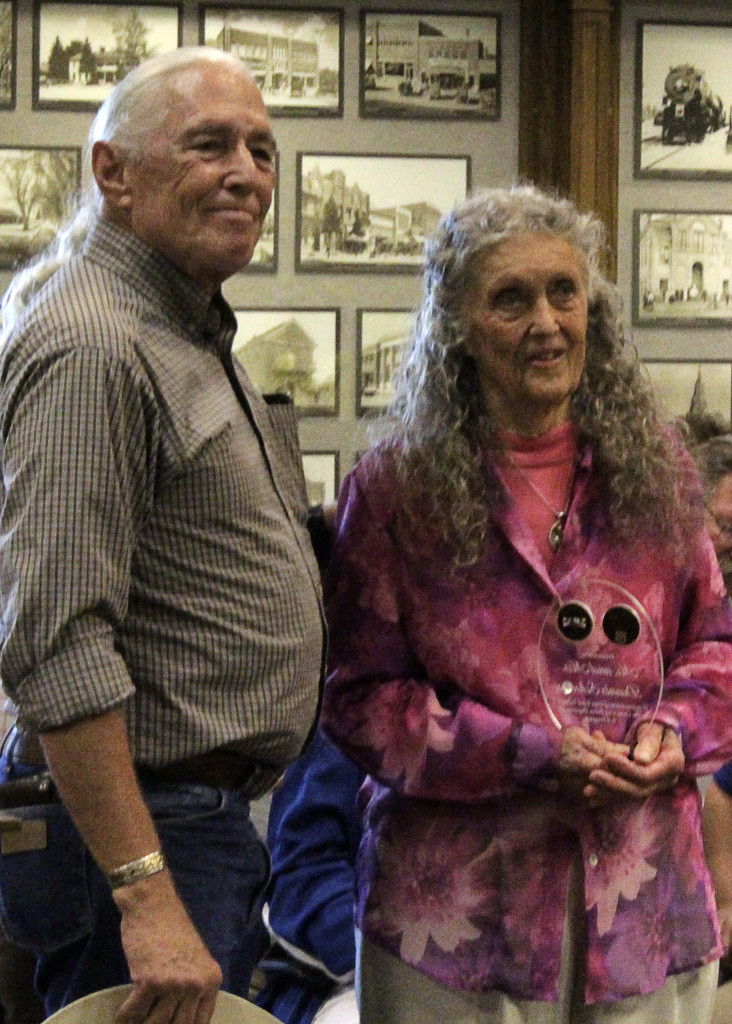 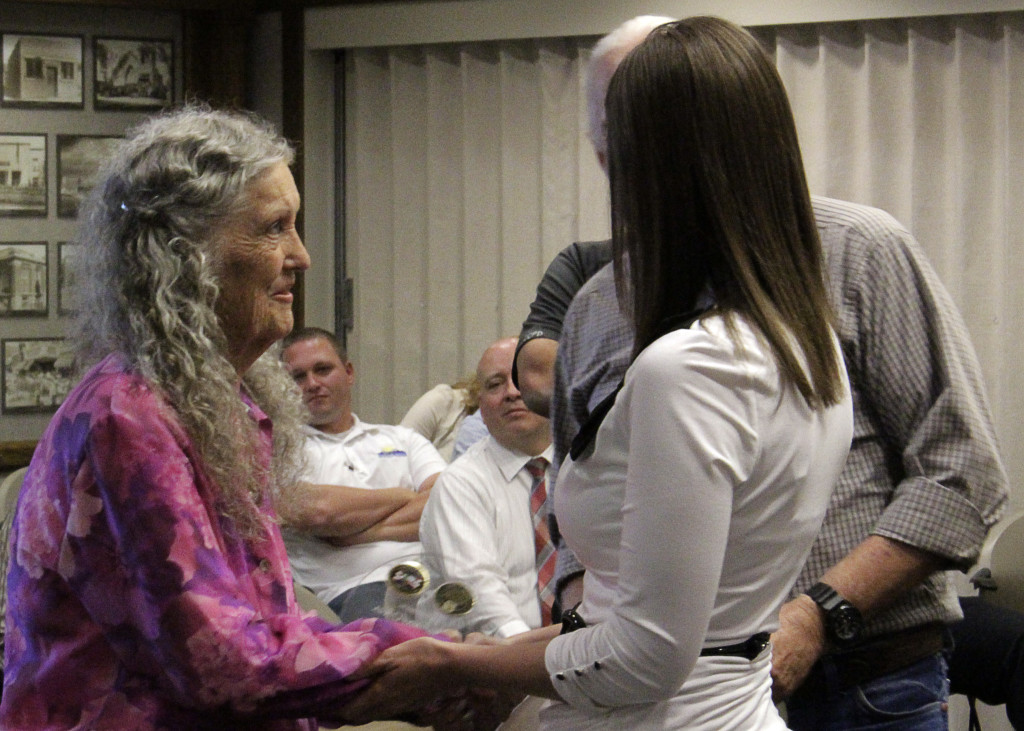 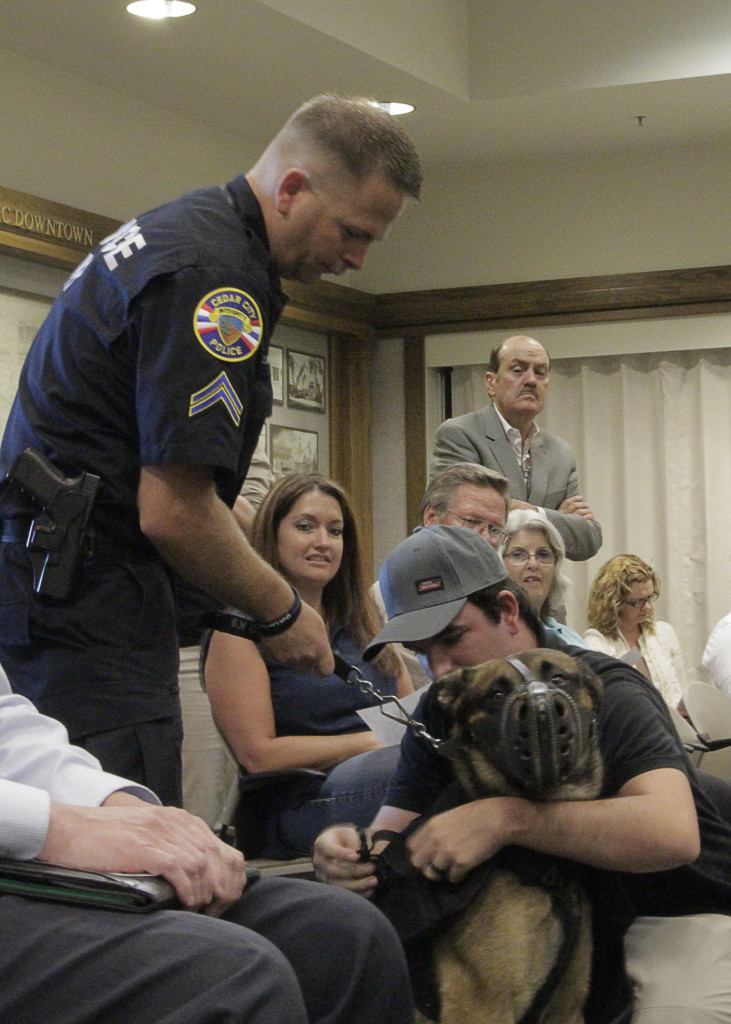 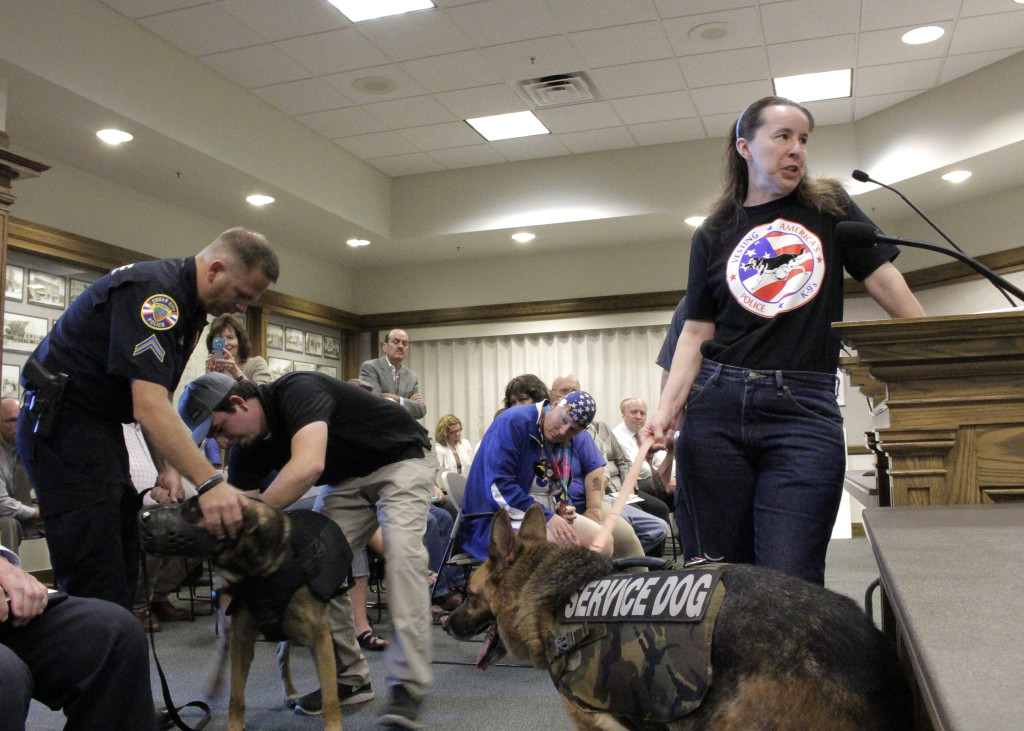 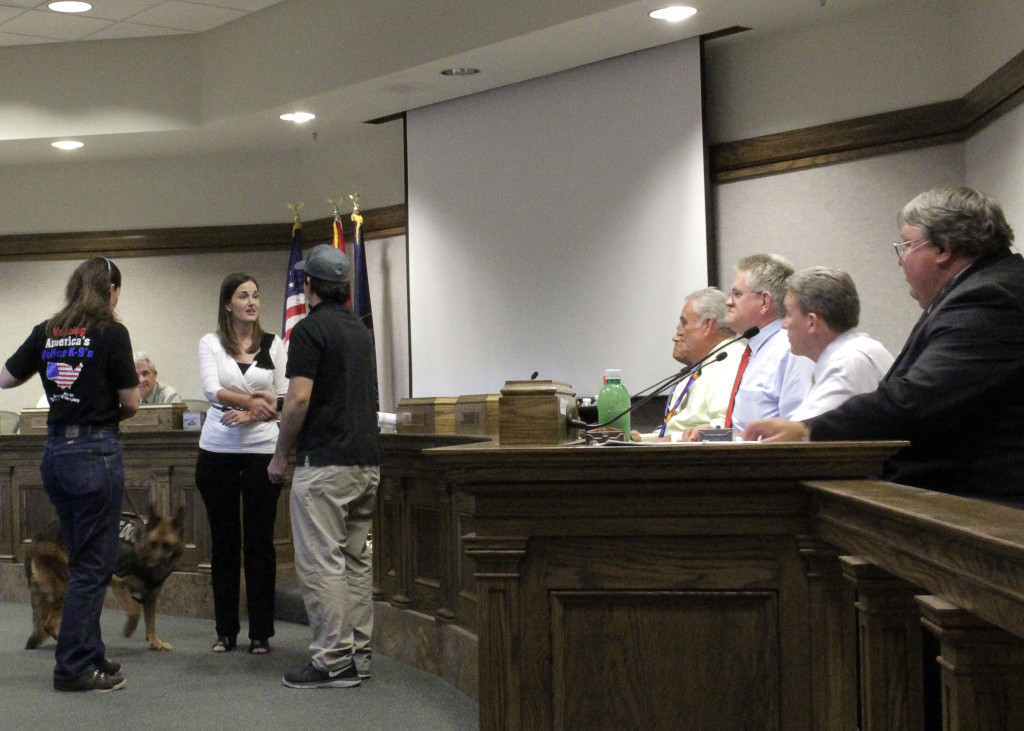