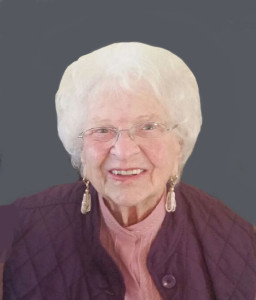 Mary was born 102 years ago on March 17, 1913, in Raymond, Alberta, Canada, the fifth of 10 children of Marlin and Rhoda Allred. On July 10, 1935, she married Roscoe Baker in the Cardston, Alberta LDS Temple. Mary lived in Southern Alberta until 1947 and in SW British Columbia, Canada prior to moving to Southern California in 1952. After Roscoe died in 1964, she worked as a beautician in Glendora, California, and Cody, Wyoming. Prior to marrying Eldon Walker in 1976, she had the adventure of living in Zagreb, Yugoslavia, for over a year. Mary and Eldon lived in Powell, Wyoming, and for several years wintered in St. George, until moving permanently to St George, Utah, in 1988, where Eldon died in late 1989.

Mary was a faithful member of the Church of Jesus Christ of Latter Day Saints and served in many leadership and teaching positions. She was always reliable and committed to excellence. Besides being a great homemaker, Mary was artistic and loved to learn new things. She cared about others, was outgoing, enthusiastic and a good friend to many people.

Arrangements have been entrusted to the care of Metcalf Mortuary, 435-673-4221. We thank Zion’s Way Hospice for the fine, compassionate help they provided Mary over the past eight months.
Mary requested that in lieu of flowers a donation be given to either the Primary Children’s Hospital in Salt Lake City, Utah, or the Missionary Fund of the Church of Jesus Christ of Latter Day Saints.

Please visit the Metcalf Mortuary website for condolences, complete obituary, funeral listings and to leave comments and stories about Mary.