ST. GEORGE — School will be back in session soon and before anyone starts singing “It’s The Most Wonderful Time of the Year,” remember that there are expenses involved in sending a student back to school  … or university. One of those expenses will probably be a computer.

With laptops ranging from $350 for a low-end Windows 10 notebook at a discount store to a higher-end Mac at about $2,000 (albeit fully loaded), this may be beyond the reach of some families.

While the Washington County School District does not require students to own their own laptops, instead offering students the use of iPads or Chromebooks during school hours, district Technology and Media Director Charlie Roberts said some teachers do create assignments that must be completed on a computer.

“But they have figured out ways to ensure all students are able to complete those assignments,” Roberts said.

Ask a typical user and you’ll get a myriad of opinions regarding inexpensive systems. Jason Bauman, an SEO associate at Trinity Insight in Philadelphia, Pennsylvania, thinks a Chromebook would be the ideal choice for a student.

“I used Open Office (and Linux) when I was in school,” Bauman said. “While it was nice and mostly functional, I haven’t touched it since I transitioned to Google Docs.”

“All you really need is a browser and a word processor,” Bauman said, “and if you’re trying to spend the least amount of money, a Chromebook is your best bet.”

Roberts said Chromebooks are the easiest for the Washington County School District to maintain and support.

“We do support most OSs, even the new Windows 10, but management is easiest for the Chrome OS,” he said. “We start teaching students typing skills beginning in the third grade, and we recommend Chromebooks for grades 3 through 12.”

Depending on the specific programs that will be utilized in the school year, a used computer with a version of Linux installed may be just what a student needs to help with the budgetary concerns.

“There is almost no reason not to embrace and promote the use of open-source operating systems and software,” Jeffery Sullivan, founder of Wisdom Seekers Management and Consulting and adjunct professor at St. Philips College in San Antonio, Texas, said. “I have been using Linux and open source software in my business office almost exclusively since 2008.”

Why Linux? For one thing, unlike a Windows disc or a Mac OS installation, it’s free. Another nice feature is Linux is less vulnerable than Windows when it comes to viruses and malware. When it comes to software, assuming there are no specialized Windows or Mac programs your professor or teacher is requiring you to own, there is no cost.

Sullivan said those free programs can include an office suite, an email client, a browser or two, a photo manipulation program, instant messaging, audio editor, music programs and e-books.

Sullivan added that many of these tools are cross-platform, so they would work on Windows computers as well, saving the cost of proprietary software.

Linux has historically been the operating system of computer gurus. However, there are “distros” (Linux-speak for distributions, or versions) that approach Windows in user-friendliness. 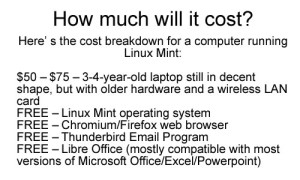 One of those distros is Linux Mint. Mint is considered by many in the Linux community to be the easiest for someone new to use successfully. One version of Mint, Xfce, is practically a duplicate of Windows XP, therefore someone familiar with Windows XP would be able to operate Mint xfce with a greatly reduced learning curve.

All those programs mentioned above are included in an installation of Mint. No separate downloading is required.

Other distros recommended by Sullivan are Zorin and Lubuntu.

Roberts said the Washington County School District has just finished phasing out Windows XP from all computers because of Microsoft withdrawing support for the system.

“In many cases we did convert those machines to Linux, ” Roberts said, adding, “We have really pushed for the adoption of web-based applications so that device choice does not matter when accessing applications.”

If you have concerns about your level of expertise with any computer system, consult a computer professional regarding your installation.

“I believe technology will change how education takes place more than anything else that has happened since Gutenberg,” Roberts said. “The changes taking place seem too rapid for some and not quick enough for others; however, technology has become ubiquitous.

“Not long ago, I sat down with a group of fifth graders and discussed the technology available to them. Every student in the group stated they had personal devices which allowed them to access the internet, every one. I was truly surprised.”

Paradise Canyon recognized by the government of Spain as best Spanish dual-immersion elementary in U.S.