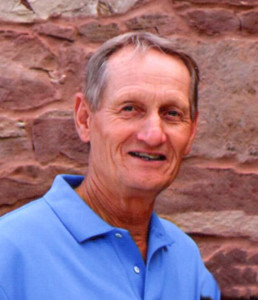 Kenneth Gardner Beckstrom, age 71, of Santa Clara, Utah, passed away peacefully at home surrounded by numerous family and loved ones on Thursday, August 6, 2015, after a courageous fight with cancer. He was born on Thanksgiving Day, November 25, 1943, in St. George, Utah, to Lee and Effie Beckstrom. He was the youngest of three children. He was the loving and devoted husband to Barbara Theobald for 48 years. They were married in the St. George, Utah, temple for time and all eternity on June 10, 1967.

Kenneth had an idyllic childhood, spending the school year in St. George and summers in Pine Valley riding horses, fishing and exploring the mountain. He served an LDS mission in the Argentina North Mission from 1963-1965 and also served in the United States Army in the Vietnam War as a medic from 1968-1969. He graduated from Dixie College in 1966, where he competed on the tennis team, and from Utah State University in 1970 with a bachelor’s degree in range science. He worked for the Bureau of Land Management as a range conservationist for 38 years in both Elko, Nevada, and St. George (Arizona Strip), before retiring in 2005.

In retirement, Kenneth enjoyed exploring the many trails and backroads of southern Utah with Barbara and many friends on his Razor and ATV. He also loved traveling with his family and took many trips all over the world.

Kenneth was actively involved in the community and LDS church. He founded Snow Canyon Little League in 1982 and spent many summers and winters coaching each of his three sons in both baseball and basketball. He served as Bishop of the Santa Clara 3rd ward from 1996-2001 and served faithfully to the end of his life in various callings in the LDS Church. Additionally, he and Barbara served a full-time mission for the LDS church in the England London South Mission from 2008-2009 and as the Transient Bishop in St. George from 2010-2012.

Kenneth’s favorite place in the world was Pine Valley. He loved nothing more than spending time there with his family at the cabin he built. He and Barbara enjoyed growing a large garden and hosting many gatherings at the cabin all summer long where he would serve his famous Dutch oven potatoes.

Kenneth’s family was the joy of his life. He loved attending the sporting events and other activities of his children and grandchildren. Anyone was welcome in his home where there was always a Jazz, BYU or Utah State game on the television.

Kenneth had a kind and gentle disposition and had many friends. He was the epitome of charity and service as he quietly went about doing good without any expectation of recognition. He will be missed deeply by all who knew him.

The family would like to thank the medical providers at Dixie Regional Medical Center, Intermountain Southwest Oncology and Dixie Hospice Care for their kind and dedicated care of Kenneth.

Friends and family are invited to share condolences online. Arrangements have been made under the direction of Serenity Funeral Home, St. George, Utah, 435-986-2085.