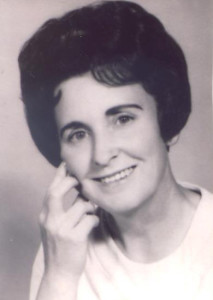 Leila May Huntsman Mayhew Stratton, age 93, returned home to her Father in heaven and waiting family members, on July 28, 2015, of natural causes. She was surrounded by her loving family. Leila was born April 4, 1922, in Moapa, Nevada, to Solon Ralph Huntsman and Jetta Mariah Leavitt. She was the second child in a family of six children.

Leila’s first marriage was to Howard White Mayhew on August 27, 1940, in the St. George LDS Temple. They made their first home in Baldwin Park, California, where Howard was employed in a large Market Basket grocery store. They were happy in their home and work for a time, then World War II came along. Howard served in the Air Force as a radio man for the duration of the war. After his discharge they came home to St. George, Utah, and built the store on the corner of 300 South and 200 East, known as The Market Basket. They were hard workers and made a success of the store. Life was good and they were happy. Together they adopted a son, Milton Otto Mayhew. Within a short time Howard became ill with kidney troubles and was rushed to the Veterans Hospital in Salt Lake City, where he died of kidney failure on December 4, 1948. Leila was left alone with her little boy, the store, much heartache and many worries. She decided to sell the store and stay at home to raiser her son.

Later, Boots Cox set her up on a blind date with Albert M. Stratton, who also had recently lost his wife, Alma, in a car accident. He had a son, Steven Albert Stratton. They began to date and after a nice courtship they eloped to Las Vegas, Nevada. They were married by the nearest bishop on October 9, 1953. Together they had more children, a daughter, Jill and a son, Oliver Clay. Albert and Leila were inseparable. They worked hard to mold a “yours, mine and ours family” into one. They filled our home with lots of love, laughter and happiness. They were blessed to be together for 58 years. Albert passed away December 25, 2011, at the age of 98. With a promise to Leila that he would be waiting for her at the gate!

Leila’s greatest joy was serving her family and spending time with them. She delighted in cooking, elaborate celebrations and feast for the holidays with her family. She loved camping, fishing and canning with Albert and other family members. She is the heart of our family and we will miss her deeply.

The family would like to deeply thank all of the loving and caring people who helped care for Leila and allowing her to stay and pass on with dignity in her own home. There are way too many of you to name but you know who you are and we could not have done it without all of you and the loving, compassionate and dedicated services rendered to her. Thank you so much, we love each and every one of you.