ST. GEORGE – A Georgia police K-9 died Thursday after being left for nearly 10 hours inside his handler’s hot patrol car.

“The Conyers Police Department regretfully announces the loss of police K9, Zane, after he was found deceased in his handler’s patrol car Thursday evening, at approximately 5:00 p.m., at the handler’s residence in Rockdale County, Georgia,” the Police Department wrote in a statement on its Facebook page Friday. 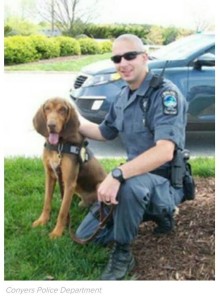 Zane, a 5-year-old bloodhound, worked as a tracking dog for Conyers Police Department for four years, the statement said, three of those with his current handler, Cpl. Jerahmy Williams.

Williams has been with the Conyers Police Department nearly five years and is a patrol Corporal. He is currently on administrative leave with pay pending the outcome of an internal investigation.

READ MORE: Did you forget something? Don’t make this deadly summertime mistake

Williams had returned home from a 12-hour shift at work, was feeling ill and immediately went to sleep, Conyers Police Police Chief Gene Wilson said during a press conference aired on CNN. It wasn’t until he was getting ready to leave for work in the afternoon and went to get Zane out of his kennel, he learned Zane wasn’t there. He discovered Zane dead inside his SUV, which was parked in his driveway.

Williams called his immediate supervisor to report the incident. Williams said he thought he had taken Zane to the kennel. However, the dog had been in the car about 10 hours.

The Police Department said it is mourning the loss of Zane.