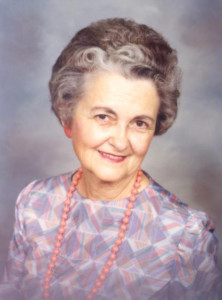 Ora Etta Hoffman Gubler departed this life on July 12, 2015. She is the daughter of Warren Eustace Hoffman and Pearl McCroskey Hoffman. She was born December 12, 1918, near Willard, Missouri. Ora graduated with honors from Willard High School. During World War II, she moved to Independence, Missouri, headquarters for the Central States Mission of the LDS church. She was employed by Zion Printing and Publishing Company as a proofreader for church tracts and publications, including the first printing of “Temples of the Most High.” She also did proofing of commercial publications.

In 1943, Ora moved to Salt Lake City, Utah. She was employed to do research in the LDS church genealogical society for two and a half years. She had corresponded with her friend Darwin Gubler while he was in the military service. Soon after the end of World War II, Darwin returned from England where he was stationed. Darwin and Ora were married in the St. George LDS Temple on March 5, 1946.

Ora was an avid genealogist. She spent many years tracing her ancestral lines and has completed their work. This was done long before the use of computers. She has served two missions with her husband, in addition to teaching in Sunday school, Relief Society, Primary and Young Womens and M.I.A. She has been an ordinance worker in the St. George Temple from April 1979 until her health failed in 2004. 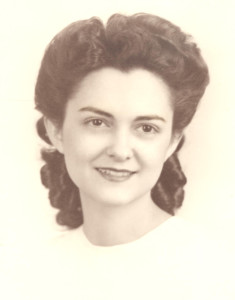 Ora devoted her life to her husband, Darwin, and her seven children, who she dearly loves. They are: Annette Hammer of Sunland, California; Linda Frost of Centerville, Utah; Joy (David) Ballingham of Ogden, Utah; Leron (Audrey) Gubler of La Crescenta, California; Gloria (Michael) Kelly of St. George; Warren (Alisa) Gubler of Visalia, California; and Wilma (Craig) DeMille of Hurricane. She loves her many grand and great-grandchildren.

She is preceded in death by Darwin; her parents; and her siblings: Ralph, Mary, Clifford and Waldo; her nieces Gayle Siebold and Kathleen Jeppson and nephew Thomas H. Hoffman; and great-grandson, Bronson DeMille. Mom has longed to go home, especially since Dad passed earlier this year. There’s a grand celebration going on, as Mom is reuniting with family and friends.