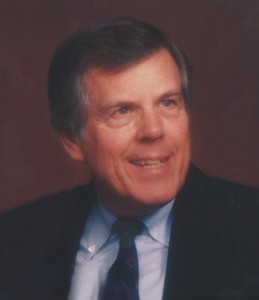 Leonard (called little deer slayer) loved hunting with his dad, brother (big deer slayer) and later in his life with his two sons, and continued to do this until he was 83 years old. He very proudly served in the U.S. Navy during the Korean War from 1950-1954. He attended the University of Utah for 3.5 years, but later became an avid BYU fan.

Leonard served in many positions for the Church of Jesus Christ of Latter Day Saints, including a stake mission, high council and an extended time of three terms as bishop of the Milcreek 5th ward.

Leonard’s first employment was at the Metropolitan Laundry at the young age of 16 as an errand boy and advanced to office manager. It was here that he met his wife Ann. After almost 20 years at the laundry, he changed his employment and went to work at Western Mortgage Co., and after 30 years retired as the construction loan officer.

Upon retirement, Leonard and his wife split their time between their two residences at Manilla, Utah, and St. George, Utah. Leonard enjoyed taking his family and friends fishing and boating when they visited them at Flaming Gorge. When their time was in St. George, they enjoyed Friday night dinner dates and playing cards with friends.

After the passing of his wife, he moved back to the Salt Lake area to be closer to his family. He enjoyed going to school functions, recitals, family dinners and anything his children and grandchildren would be involved in.