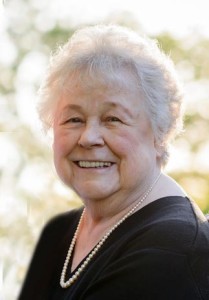 Beatrice Jean Carr, age 83, passed away on Friday, June 26, surrounded by her loving family.  She was born on October 5, 1931, in Glascow, Chariton, Missouri, to Alva Madison Sapp and Fannie Lee Calvin.

She spent her first 14 years in Missouri.  In 1946 she moved to Hurricane when her mother married Stanley D. Hinton.  She attended Hurricane High School, where she met the late Jerald Lee Graff.  They were married in 1951 and had two girls, Cherilyn and DeLana.  Jerry died in 1958 in southern California, where they had been serving time in the Navy.

Bea met Richard D. Carr when he gave her a speeding ticket one August afternoon.  Dick was a California Highway Patrolman at the time.  Apparently he ended up paying for that ticket himself and always said that that was the best ticket he ever wrote!   Dick and Bea were married April 1, 1960, in Upland, California, and always enjoyed the good joke that they were married on April Fools Day.  They just celebrated their 55th wedding anniversary.

Bea and Dick purchased a cattle ranch in northern California several years after they were married.  There they raised their family of four boys and two girls.  They decided to move back to Hurricane in 1985 and purchased the peach orchard where they now live.

She had many hobbies and especially loved decorating and doing floral arrangements.  She loved decorating for weddings and special occasions.  She became an avid genealogist in her later years and was very proud of the two volume book she published on her ancestors.  She also loved sewing, cooking, gardening, crafts and traveling.