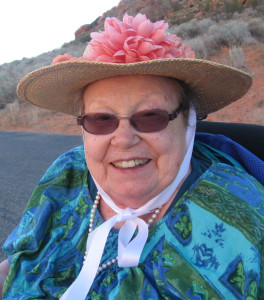 Our beloved mother, Ruth Metcalf Green of Ivins, Utah, passed away peacefully at 93 years of age on Sunday, June 21, 2015, surrounded by her family. She was born on June 22, 1921, in Brigham City, Utah, to Marie Louise Goodliffe and Lund Dahling Metcalf. She married Arnold Lynn Green on October 4, 1943, in the Salt Lake City LDS Temple.

Mother grew up in Bear River and Brigham City moving to Salt Lake City as a young woman. She was involved with music and theater, and graduated from Granite High School. In the midst of World War II she married her childhood sweetheart, Arnold, after he returned from serving a mission for the LDS church. She then supported Arnold as he served his country as a yeoman in the United States Navy. Following the war they settled in Salt Lake City while Arnold studied at the University of Utah. After graduation they moved to Fresno, California where they raised their family. In 2007 she moved to Ivins to live with a daughter. 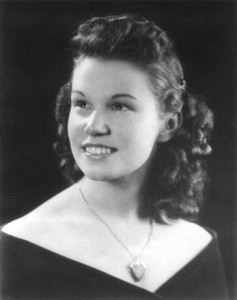 She is known for her contagious smile, her quick wit, and a spirit of love and goodness that encircles all within her influence. She considered her most important life’s work to be her family, for which her posterity will ever be grateful and blessed. She served with love in many callings in The Church of Jesus Christ of Latter-day Saints, teaching hundreds of children to love music and to love their Savior and His Gospel. She also served a mission alongside her husband among the Hmong refugees of the San Joaquin Valley.

She is survived by her children Sheryl (Kent Martineau) of West Bountiful, Utah; Becky LaBella of Corning, New York; Cathy (Gary Baker) of Ivins, Utah; Vauna Marie (Roland Kelly) of Fresno, California; and Debbie (Tony Osborn) of Tucson, Arizona. She is also survived by 29 grandchildren, 64 great grandchildren, three great great grandchildren, and her brother, Duane (Donna) Metcalf of West Valley City, Utah. She is preceded in death by her husband, parents, sisters, a granddaughter and a great grandson.

We are grateful for the kind, tender care she received from Elaine, Kimi, Kiernan, Dr. Hallenborg, the staff at the Veteran’s Home in Ivins and the hospice staff at CNS.