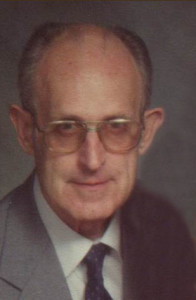 Walter was born in Beaver, Utah, on February 24, 1917, to Willard Gardner and Rebecca Viola Hale. He was fourth in a family of seven children raised in Logan, Utah, in a home just off the Utah State University campus.

As a youth, Walter excelled at sports, particularly football and tennis, and he was a gifted mathematician (at a glance, young Walt would accurately calculate lumber loads and board feet at the mill). He also was an accomplished glass blower, providing scientific lab equipment for the science faculty at the university to make extra money.

Just after college, he used that experience as a designer at a scientific instrumentation company in Chicago. He was active in his high school paper, serving as managing editor. He often said that he would have been delighted to pursue journalism as a career had his passion for science not eclipsed his interest in writing.

Walter held a deep respect for his father, a renowned scientist known as the father of modern soil physics (Walter’s children often called him the Son of Soil Physics), and their interests in the physical properties of soil ran parallel courses. Walter received his scientific schooling at Cornell University and then later at Utah State University where he was awarded the first Ph.D. granted at that institution.

Walter served in the Army Air Corp as a navigator on B17 bombers. He served under his uncle, general Grandison Gardner, and was promised that he wouldn’t enjoy great promotional opportunities because of the family tie, but that he would “never lack for interesting things to do.” That proved to be the truth, and Walter had significant input as an instrumentation designer (the man could build anything!) for the state of the art climatic hangar on Eglin Field, and on the project to develop the U2 Missile based on the German Buzz Bomb near the end of the war. Walter retired as a Lt. Colonel in the U.S. Air Force Reserve.

After the war, Walter met and married Barbara Brown who was a student at Utah State. The two made their family home at Washington State University in Pullman, Washington. Walter was a Professor of Soil Physics who was dedicated to the success of his many graduate students, and Barbara was a homemaker and devoted mother of five.

Walter and his family traveled extensively. They lived a year in Renkum, Holland, while Walter was on a Guggenheim Fellowship at Wageningen Agricultural College and another in Vienna, Austria, where he worked with the International Atomic Energy Agency. Notwithstanding the travel, Walter very purposely designed his family life around the significant health needs of his sweet wife. He was attentive and sacrificing, giving up many opportunities for wealth and fame in the field of science in order to sustain an ordered and manageable family life.

Walter graciously let professional opportunities pass and doted on his wife until her death, after which he said his one lasting resentment was that he didn’t have one more day to care for her. He was as attentive to his family’s needs as he was to his companion’s, and his family fondly remembers his complete devotion to his wife, his faith, and his science. He was as comfortable at a chalkboard staring thoughtfully at the longest mathematical equation anyone has ever seen, as he was doing the dishes, or playing on the living room floor with his children.

He was a peaceful and dignified man who cherished a quiet testimony of Jesus Christ. Walter was a calm and thoughtful father. He was conscious of his health and remained active well into his 90s. Growing from his love of tennis, Walter took up racquetball at the age of fifty and eventually won a number of gold medals in the Senior Olympics. His guilty pleasure was to lure unsuspecting young racquetballers into a game with an old man and then “skinnin’ ‘em” on the court– which amused his wife very much.

Among Walter’s best remembered professional accomplishments were his authorship of a textbook and a movie that have changed the way scientists and industrialists understand the non-intuitive way water moves through soil. The book, and particularly the movie, continue to be popular among people who deal in soils and the supporting science remains valid. Walter was influential in the field of science and held many association positions including president of the Science Society of America. So mathematical and analytical was his mind that he once remarked after listening to a piece of music, “It’s like listening to math.”

Walter retired from Washington State University to St. George, Utah, where he lived until shortly after Barbara’s death. He then moved to Provo, Utah, to be near family where he died on June 11, 2015, of complications of old age– a malady he didn’t particularly believe in. He is survived by his children, Jeanne Minert (Roger), Marolyn Mortensen (Dale), Janet Roach (Todd), Laurie Boyce (Oscar), and Willard Boyd (Diana).

Nothing would please Walter more than donations to the HHT Foundation to support efforts to cure the disease that took his sweetheart’s life.