ST. GEORGE – Police located and took Riley Joseph Guerrero into custody Thursday afternoon after identifying him as the alleged shooter in an early morning shooting in St. George Wednesday and securing a $100,000 warrant for his arrest for attempted homicide.

The St. George Police Department had been searching for 18-year-old Guerrero, of St. George, after he allegedly shot a 21-year-old man in the torso in the area of 400 E. 840 South, resulting in the man being transported to Dixie Regional Medical Center in St. George to have surgery for his injuries. 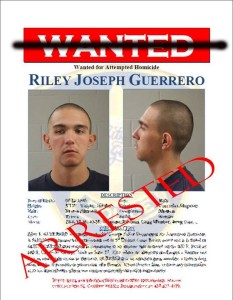 Detectives from the St. George Police Department and Washington County Drug Task Force were receiving and following up on leads to locate Guerrero, an admitted gang member, according to police, after a warrant was issued Thursday by the 5th District Court for his arrest.

Just after 3 p.m. Thursday, investigators spotted Guerrero in a vehicle, the Police Department said in a press statement issued Thursday afternoon, but Guerrero was able to exit the vehicle and hide before officers were able to turn and catch up with the vehicle he was in.

Two other people were still in the vehicle, and detectives were able to confirm they had Guerrero in the vehicle for the purposes of eluding capture, the Police Department said. The two are now facing pending arrests for obstruction of justice.

Other detectives in the area saw Guerrero run from a residence and get into a vehicle, the Police Department said. Detectives initiated a traffic stop on the vehicle, and the driver was eventually stopped at 100 E. Telegraph Street in Washington.

Guerrero was taken into custody safely and without incident.

The two other occupants in the vehicle at the time of Guerrero’s arrest may also face charges, police said.

“The St. George Police Department would like to thank all of the members of the public who have contacted us with information relating to this case,” the Police Department said in the statement. “We very much appreciate and rely upon your support to keep our community safe!”

This is a developing story and may be updated as further details emerge.