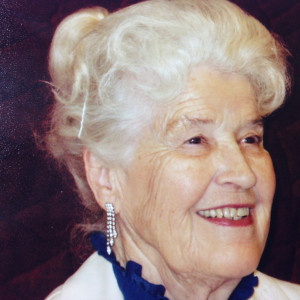 Thanks to the help of her children, loving caregivers, and the dear sisters in the Bloomington Hills 6th Ward, Joyce was able to stay in her home until the last 10 days of her life.  She loved her home because it was especially built for her by her dear husband, Ambrose Billy Chabot (known by “Am” or “Bill”).  Every window on the east side of their home looked out on a lovely view of the St. George LDS Temple. The spacious living room, with its white marble fireplace constructed by her husband, was beautifully decorated by Joyce to reflect the temple view, and was lovingly called “The Temple Room” by her posterity.

Joyce also spent many happy hours in that room practicing her treasured organ. Mom also loved to host swimmin’ and eatin’ parties for her family and friends at her backyard pool.

Joyce was born on March 6, 1924, in Roberts, Idaho, just minutes after her twin sister, Jeane was born.  They were the daughters of Gordon Lorenzo Jenkins and Eva Parkinson Packer.  Tragically, their father passed away as the result of a hunting accident when the twins were just five months old.  Their mother moved back home to Logan, Utah, to earn a teaching degree, then took various teaching jobs around Utah and Idaho. As a result, Joyce and her twin sister attended many schools during their childhood, however they always went home to Logan to spend their summers with Grandma and Grandpa Packer.

When Joyce and her sister were 11, their mother married a widower, Clarence Cordon, and they gained three new siblings: Clarence Jr. (Bud), Richard (Dick) and Marcie Cordon.  Later, two more siblings, Lee and Phyllis, were born into the family. Joyce loved her brothers and sisters and enjoyed associations with them and their spouses over the years.

Joyce was a good student and enjoyed school.  Her senior year of high school was spent with her Aunt Cornella in Ithaca, New York.  Joyce earned a special certificate of merit with a small monetary award while there.  After returning home, she completed two years at Idaho State College in Pocatello, then moved with her family to Seattle, Washington.

Not long after arriving in Seattle, Joyce was attending sacrament meeting in the Seattle 2nd Ward, and noticed a handsome young missionary was giving his return home speech – and it was love at first sight for both of them!  Joyce married Ambrose Billy Chabot for time and all eternity in the Logan Utah LDS Temple on April 18, 1945.

Joyce was a lifelong student.  She returned to college after most of her children were in school, eventually earning a bachelors degree in education with a french major, and a masters degree in librarianship at the University of Washington.

Within two years of earning her master’s degree the Chabot family moved from Seattle to Utah County where Joyce obtained a job with the Provo City Library. She started many new reading groups and programs and enjoyed giving dramatic book reviews over the 14 years (1973-1987) she worked at the library.  Joyce also studied Spanish and continued to read her scriptures in Spanish for the rest of her life “to keep her brain alive”.  She also enjoyed playing the piano and organ, and was able to play in the St. George Temple for eight years.

After retiring from the library, Joyce, Am and their son, Brent, moved to St. George where they built their dream home. In St. George, Joyce worked at Wal-Mart and later for Angel Care doing home nursing care for the elderly.

Joyce was an active member of The Church of Jesus Christ of Latter-day Saints, serving in many different positions, including relief society president, cultural refinement teacher, nursery leader and primary pianist.  One of her favorite callings came after the birth of her sixth child, Donna, when she was called to serve a stake mission in Seattle. She especially enjoyed the time she spent on her mission serving with her dear husband. It brought her great joy to see investigators embrace the gospel, and it was her hope and desire that her own posterity would also embrace the fullness of the gospel.

Joyce enjoyed many golden friendships throughout the years of her life in Seattle, Provo and St. George.  She and her husband also made some special friends during the years they spent with RV traveling groups in Provo and St. George. She especially grew to love and depend on the dear sisters in the Bloomington Hills 6th ward who were so kind and loving to her in her declining years.  Their loving service helped her stay in the home she loved so much.