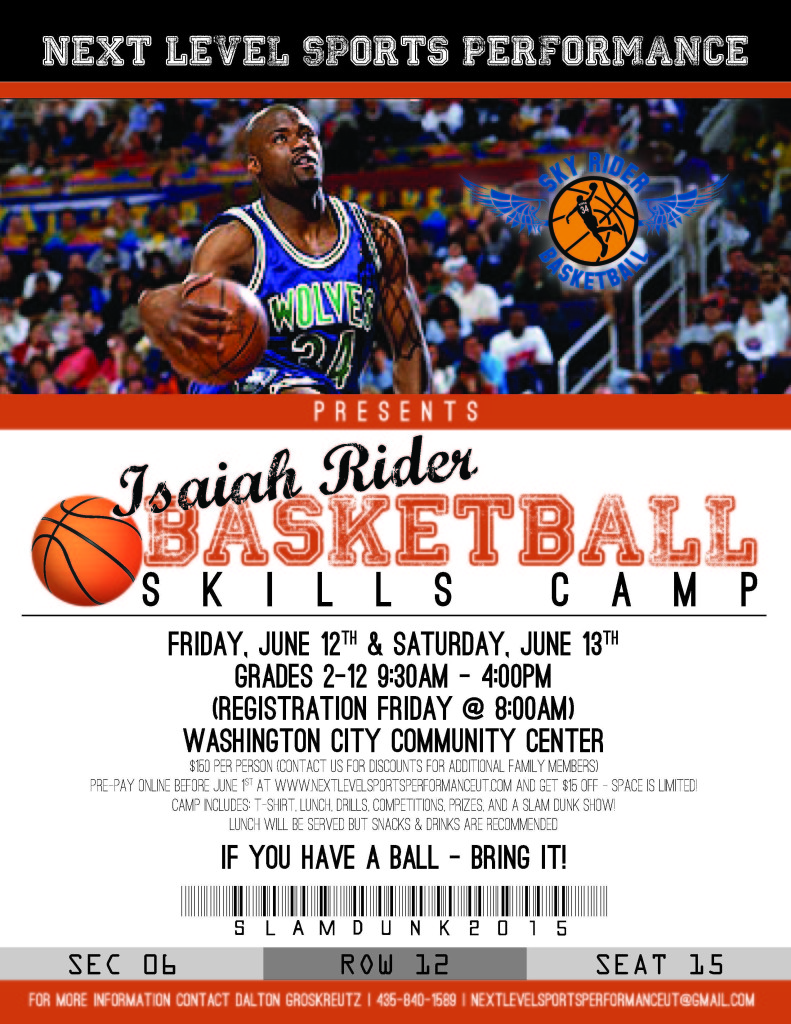 “We want to help kids see and understand what it takes to get to the next level,” Tupe said. “We’ve all been there and we know the hard work and dedication it takes. And it’s not just about basketball or athletics. It’s about kids and presenting yourself as a good person, and how you live your life.”

Rider, who was a nearly unparalleled talent, spent much of his playing career in the 1990s battling coaches and the law, had a sort of re-birth after after serving time in prison on drug charges in 2007. Since then, the former UNLV and Minnesota Timberwolves star has dedicated much of his life to helping young people, establishing the charity Sky Rider Foundation, which puts on camps and provides scholarships for underprivileged kids.

“Dalton and I were down in Arizona, visiting an aunt, and we went and watched a camp that he was doing,” Tupe said. “We were so impressed with the way he worked with the kids, the way he talked to them. Sure, it was a basketball camp. But it was also about life. After that, we really wanted him to come and do a camp with us.”

Rider, who played nine seasons in the NBA and averaged 17 points, 4 rebounds and 3 assists per game, agreed and will bring his knowledge and life story to southern Utah Friday and Saturday.

The camp, titled “Isaiah Rider basketball Skills Camp,” is from 9:30 a.m. to 4 p.m. Friday and Saturday and is $150. Campers can register online here or in person Friday morning. Registrants will receive a camp t-shirt and lunch will be provided both days. There will also be a slam dunk contest (Rider won the NBA Slam Dunk Contest in 1994) and Rider has also offered a special prize to anjy camper that can beat him in a 3-point shooting competition.

Tupe and Groskreutz are using the event to kick off their new training facility, Next Level Sports Performance, which officially opens the first week of July (location: 520 N. 3050 E. #3, near Costco).

Tupe, who currently plays semi-pro football and stars for the local Zion Lions as a quarterback, played linebacker at Dixie State in 2004-05 and then started at Texas A&M for two years.

“We are very excited to open up this facility,” Tupe said. “Nowadays it’s all about speed and quickness and we believe we can really help kids improve in those areas. Plus, we also like to help teach life lessons and responsibility. We had some parents come and watch and then they wanted us to do a Moms and Dads class as well.”

Groskreutz was a multi-sport star at Snow Canyon, then played four years of basketball at Dixie State. After he graduated, he used a final year of eligibility to play one season of football at DSU. Groskreutz also plays for the semi-pro Zion Lions.

“Misi does a majority of the training in speed, agility and footwork,” Groskreutz said. “I’m more of a sport-specific trainer, especially for basketball. But we feel like we can do a lot of things in conjunction with some of the sport-specific places like House of Hoops. We can complement each other.”

When it opens next month, Next Level will feature a half turf, floor for football training as well.