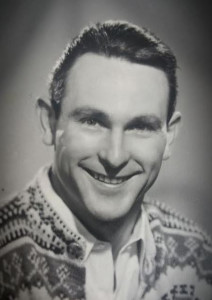 He studied at 10 universities and colleges and earned his medical doctor degree from University of Lausanne, Switzerland. In WWII he served as a pilot in the USAAC in all three theatres of action: American, European, and Asiatic Pacific. He flew many wounded soldiers in the C-47 from battlefields to hospitals, which inspired him to go into medicine.

He was a gifted surgeon and performed pioneering neurological surgeries with his colleagues. Post war, he was in the active reserve of the U.S. Air Force as a pilot physician and the U.S. Navy as a flight surgeon simultaneously for 10 years. He practiced medicine and surgery in Beverly Hills and Westwood California and was flight surgeon for United Airlines, president of the Los Angeles County Medical Association, chief of staff of the Sunset Blvd. Hospital, life member of the American Academy of Family Physicians, Silver Anniversary of the Hollywood Academy of Medicine. He was flight surgeon of the Royal Saudi Air Force, Royal Saudi Navy and the Saudi Ministry of Interior.

Creed loved to travel the world, and especially enjoyed Utah. He loved flying in his Vultee BT-13B WWII Basic Trainer Aircraft, water skiing at Lake Powell, snow skiing, playing tennis, meeting new people and socializing with friends. He was a faithful member of the Church of Jesus Christ of Latter Day Saints and served in the French mission (Switzerland and France) after WWII. Creed was married to Diane Phillips, September 6, 1956, in the Los Angeles LDS Temple. They later divorced.

Family wishes to express loving appreciation to Applegate HomeCare and Hospice, The Retreat at SunRiver Assisted Living Center and all of his wonderful friends and neighbors for their care and support.