MESQUITE, Nev. – Over 500 golfers are getting set to tee off in the desert community of Mesquite, Nevada, Monday through Friday as part of the 13th annual Mesquite Amateur, a five-day, 54-hole, handicapped amateur golf tournament.

Golfers from across the nation and around the globe will descend on seven of Mesquite’s premier courses in a week filled with slices, drives, sand traps, birdies, elations, frustrations and, perhaps most importantly, camaraderie, laughter and fun.

Though it is billed as an amateur tournament – amateur meaning your avid everyday and destination golfer – tournament organizers strive to give participants an experience similar to what the professionals of the sport would get, Tournament Director Christian Adderson said.

From the tee gifts, which include an Adidas golf shirt, a Flex Fit hat, a bag tag and golf towel to dinner parties and professionally filmed and produced highlight reels of each day of play, the Mesquite Amateur goes above and beyond to create a unique experience for its golfers.

People love the highlights, Adderson said, adding that the golfers love coming to the dinners to see if they made the big screen.

Players in the tournament are divided into flights by age as well as handicap which allows them the opportunity to compete with golfers their own age and with like ability, Adderson said.

After three days of tournament play, the top ten in each flight win gift cards ranging from $75-$650 from Callaway Golf and TaylorMade Golf, two of the tournament’s sponsors, and the top four in each flight continue on to the championship round.

“Thirty percent of the field gets payout,” Adderson said.

With a field of 530 registered golfers, both male and female, the Mesquite Amateur, is the second largest amateur golf tournament in the United States, Adderson, said.

A production of this scale, Adderson said, one that brings so many people to Mesquite, Nevada, would be impossible without the help of volunteers who act as ambassadors both for the City of Mesquite as well as for the tournament.

Adderson said of the volunteers: “They are basically my right hand during the tournament. We couldn’t do it without their help and support.”

Adderson was also quick to thank the tournament’s sponsors; Mesquite Gaming, The Mesquite Resort Association, Golf Mesquite Nevada, The City of Mesquite, Southern Wine and Spirits as well as Callaway and TaylorMade.

Now in its 13th year and with increased numbers of participants, the tournament can be viewed as a success but, Adderson said, one of the things he is most proud of is the addition of a scholarship fund designed by tournament golfers and used to benefit youth in Mesquite.

Known as the Bruce King Memorial Scholarship Fund, the scholarship, named in honor of one of the original participants in the Mesquite Amateur Bruce King, goes toward college expenses for a graduating senior from Virgin Valley High School, Adderson said.

“He loved to come here to Mesquite,” scholarship founder, George Salcedo said of King, “not just for the tournament. He would come three to five different times a year because he loved it.”

The scholarship was founded in King’s honor by Salcedo and each year’s recipient is decided on by a board of golfers who all became friends through the tournament.

“We have a very eclectic board of very different people,” Salcedo said, “but all of us have the same goal of helping someone achieve greatness.”

The scholarship fund was started in 2013 and is funded by a practice-round skins game, raffles and a $1,000 donation by Mesquite Gaming, Adderson said. The first scholarship was awarded in 2014.

This year’s scholarship had 13 applicants and was awarded to Leslie Pacheco.

Salcedo said that choosing a winner was very difficult but Pacheco’s combination of good grades, volunteerism and extra curricular activities helped the board to know she was a great choice.

Adderson gave high praise to Salcedo and members of the scholarship board saying that they were leaving a huge imprint on the youth of Mesquite by propelling them toward a college education. 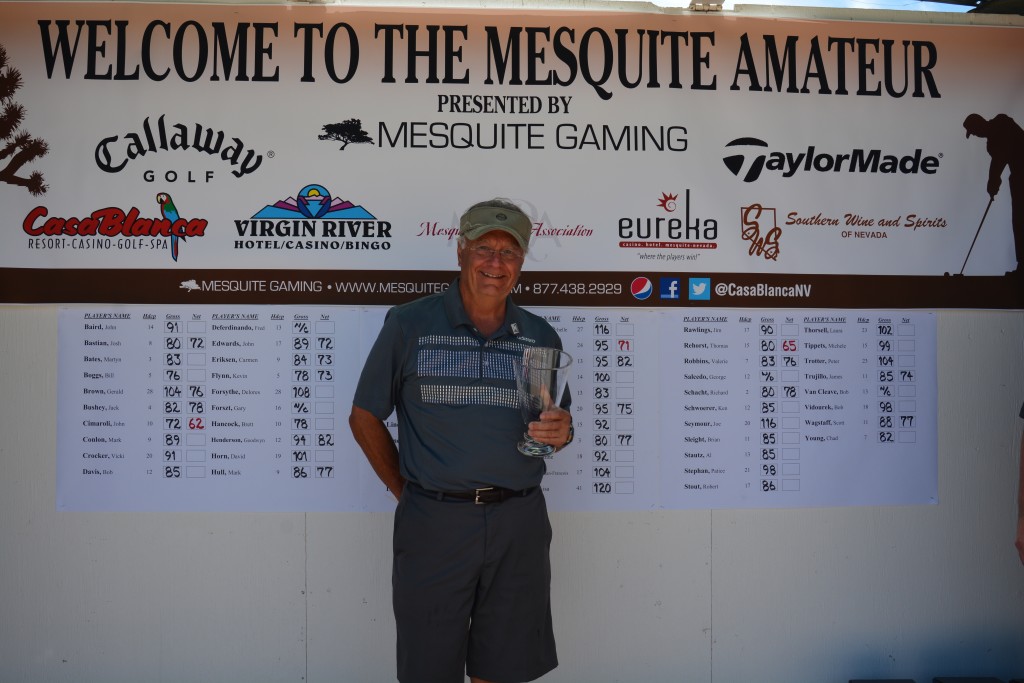 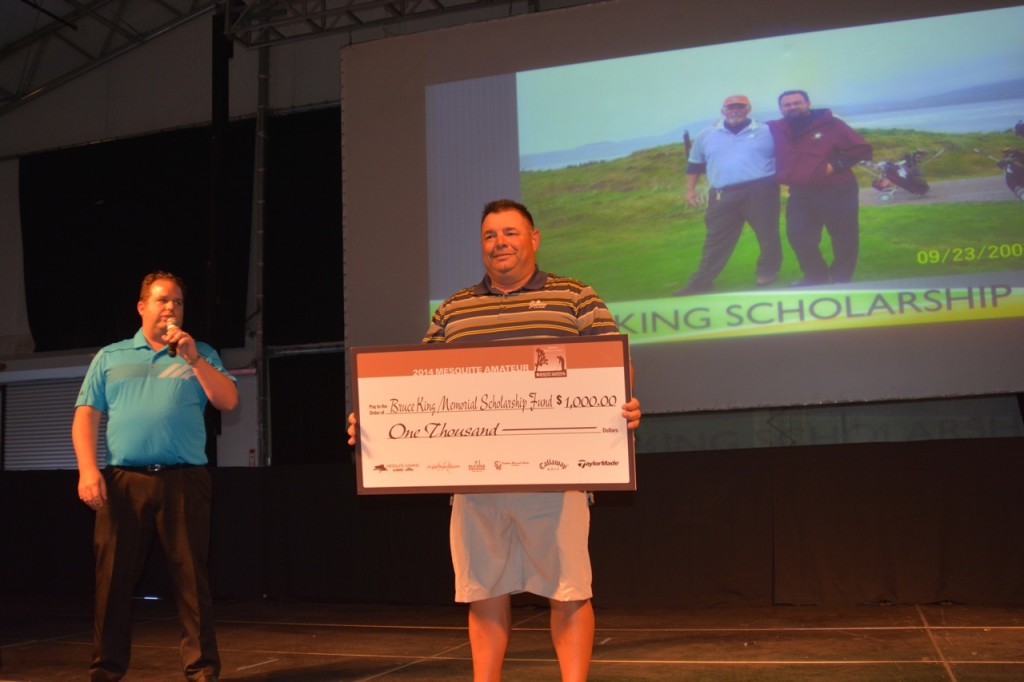 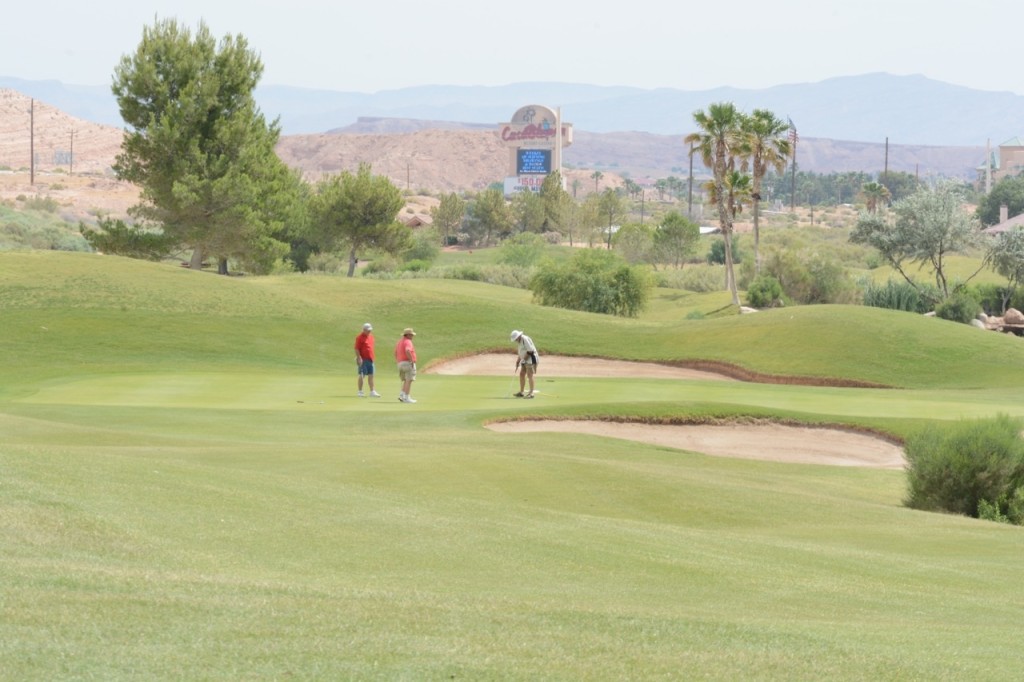