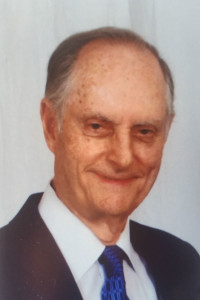 Paul Lowry, Jr – better known to us as Biff – died on April 9, in St. George, Utah, at the age of 87 following a prolonged illness.  He lived a long and happy life.

Biff was born in Oxnard, California, on May 10, 1927.  He was the son of Paul Lowry, a well-known writer who was sports editor of the Los Angeles Times, and Lillian Elliott Lowry, who Times photographers often used as a model.

Biff grew up in Southern California, always interested in sports, and desperately wanted to be a jockey. He outgrew that dream (literally) by the time he was in junior high school. In high school, he was on the basketball team, tennis team, and was captain of the track team.

Biff joined the Navy fresh out of high school in 1945, where he spent the balance of World War II as the sports editor of the Naval Training Center newspaper. During this time, he was able to meet and interview Olympian and war hero, Louis Zamperini, who is the subject of the recent movie, “Unbroken.”

After the war, Biff attended Occidental College where he competed in track, swimming, and water polo. During college he worked summers at Hollywood Park racetrack where he got to feed sugar cubes to Seabiscuit and other famous horses.  He graduated from Occidental in 1950.

His career was in horse racing, and though he never got to be a jockey, Biff rose from being a stable hand to becoming the president and general manager of a racetrack and horse sales company in Kentucky and later in California. He served in various other leadership positions within the horse industry over the course of his career and was also the president of a 300-member Rotary Club in Lexington, Kentucky. 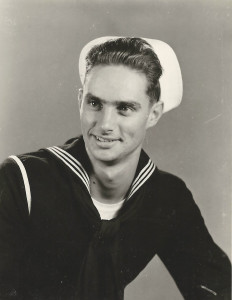 Biff is the author of three books:  A Century of Speed, Hollywood Park – From Seabisuit to Pincay, and Killing Phar Lap.

Following a career in the horse industry spanning six decades, Biff finally came home to become a full-time resident of St. George, Utah – but he really didn’t retire. He became an assistant swim coach for the local high schools and part-time sports writer for The Spectrum.  This truly became his passion, as he loved working with these kids and bringing more attention to the sport of swimming through his writing. Over the years, his articles have appeared not only in The Spectrum, but in the Los Angeles Times and various other publications.

Biff never lost his thirst for competition, becoming a Master swimmer in his later life, winning several gold medals and national championships in his age group, and even swimming on two relay teams that set national records.

His affection for dogs, horses, and the swimmers he coached was exceeded only by his love for his family. Biff is survived by his wife, Katye (Mary Kate Douglas Lowry); three sons, Thomas (Donna), Timothy (Kriss) and Clinton (Aimée); one sister, Paula Connolly Galbraith; and two grandsons, Liam and Harrison.

The family would like to thank Sun Tree Hospice, especially the nurse Mike. Big hugs go out to the wonderful ladies who provided round-the-clock, in-home care.

Arrangements have been handled by Spilsbury Mortuary.  Memorial contributions may be made to the Wounded Warrior Project helping military veterans.