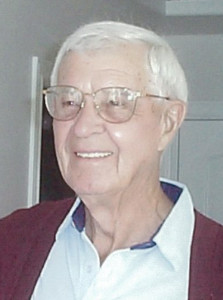 Harold was taught by Pappy, who migrated from Denmark, fine craft carpentry, masonry, and general construction. As a teen, Harold had an affinity for engines, machines, and electrical systems. In his early teens he fixed up a junk car good as new and used it for work and courting. Harold, Dora, and his folks moved to San Francisco, California. Grace worked in shipyards while Pappy and Harold remodeled an apartment house in the city and Sandra was born February 1943.

In May of 1943, Harold was commissioned by the U.S. Navy to report to a specialized school in Illinois to learn diesel engine hydraulics. Because of his innate curiosity and retention of facts, he graduated with top honors. Harold’s job was working on newly designed engines that had not yet been tested. These engines were installed in crafts that sailed down the Mississippi River to New Orleans and to Virginia Beach on the east coast. Harold went to Virginia Beach with other sailors to practice running the new engines and maneuvering the crafts. Then they set sail for Falmouth England and Plymouth where again the men trained on landing and loading the craft. Between Virginia Beach and Plymouth Harbors some LCTC/LCFC were sunk along with the men. No one knew these craft were bound for Normandy until the day before June 6, 1944.

Harold, along with crew, participated in the invasion on D-Day at Omaha Beach. Harold’s craft could not back off the beach because the reverse line out to deep water became tangled with dozens of other craft’s reverse lines. They were sitting targets for German shells. Craft all around were shelled and sunk. His LCT and its men sustained shrapnel but only one man died. The young captain froze. Harold yelled orders to chop the line so they could disentangle. His screams to get the axes got the men working fast. They were able to free themselves from the tangled lines but spent all night under the cover of dark running the engines full speed to turn and get off the sand. In twilight they pulled up to a ship and took on cargo, bound for a city up river in France. The craft was limping and taking on water. By the time freight was loaded, they had a bare 7” freeboard. It did not matter that they might sink, they had orders. Harold kept the engines going and off they went. Halfway up river the prop just stopped. Harold dove into the murky water time and time again until exhausted, he freed the fouled prop. When they reached their destination, they had 3” of freeboard. In later years, Harold found he paid a high price for diving in that dirty river. One certain conformation of the toxic water was the cancer that developed in his tear ducts. He was sorely vexed by this condition in his later years.

Harold returned to the states and made his way to California where he and Pappy joined in the business of custom home building. At least one of their homes was featured in House and Home Magazine in Marin County. Harold built most of the homes he lived in. Dora and Harold divorced in 1963 after 21 years of marriage. Harold went on to work in the aerospace industry. Harold then met and married Wanda Lou Benso in August 1964. They lived on the west and east coasts, eventually retiring to Utah in 1996.

Wanda Lou Benso and Harold settled in St. George, Utah, for its warm weather, gorgeous scenery, and the golf. Harold built his house in Bloomington Estates on the course he loved. They did some traveling, even visited Normandy. But mostly they were avid and apt golfers having fun and making true friends from the golf course and community. They thrived in their retirement years and loved their home. They spoke often of gatherings, parties, and the kind support from friends and neighbors over the years.

A military honor guard will be present to honor his service to his country.

Family and friends are invited to share condolences online at the Serenity Funeral home website. Arrangements have been made under the direction of Serenity Funeral Home of Southern Utah, 435-986-9100.