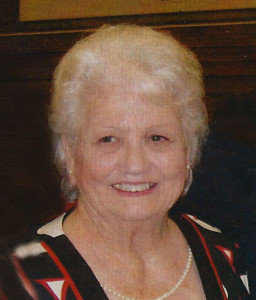 ​On March 20, 2015, Olive Brooks Esplin took a last look around and said, “This is not my home. Where is Spence?” Slipping the bonds of earth, she left to join Spence, Kip, father, mother, sisters and brothers who had gone before. And so she crossed over, and all the angels rejoiced at her coming.

Born in St. George to George Brooks, Jr. and Flora Morris Brooks on March 7, 1927, Olive was the eighth in a family of nine.  Her father was the gardener at the St. George Temple, and Olive spent her childhood working with him and playing on the temple grounds. Her mother was a florist, so from both parents she learned about aesthetics and that the beautiful just doesn’t happen. It is the result of arrangement, composition, color, texture, design, balance, nurture, and care, and for Olive, beautiful things happened because she made them happen, in her art and in life. She arranged and put together, nurtured and cultivated.

Olive’s ancestors were among the first settlers of St. George. They were “called to Dixie,” and as her great-great grandfather said, “We have never been released from that calling.” Because of her heritage, Olive was deeply committed to serving the community. She gave money, she gave her time, and she gave her whole heart. She sang with a group, The Melody Moms, for many years. She lifted up the hands that hang down and gave comfort to the oppressed and lonely. She insisted on better treatment for those with disabilities, and she supported every good community event. She endured well the illnesses and tragedies of her life, not a few, refusing to let sadness, disappointment, and defeat define her.

When Marion Bentley (head of the Drama Department at Dixie College) needed help creating costumes for his shows, he asked his dear friend, Olive, for assistance. For many years Olive helped design and create costumes for Dixie College productions, working out of her home. The Esplin home, therefore, became a familiar destination for students working with her.

Later, after taking an associate degree in art from Dixie College and completing advanced coursework at SUU, Olive officially joined the faculty of Dixie College in the Fall of 1970 as a costumer and instructor.   Her costuming shop became an important part of the Dixie College Drama Department. Ever a center of conversation and productivity, Olive’s office was a place where she and students worked together.  Many of her students couldn’t even sew when they began with her, but under her instruction and guidance they created  spectacular costumes for Dixie College productions, including Hello Dolly, Our Town, Oklahoma, Guys and Dolls, Blythe Spirit, and Charlie Brown, to name but a few.

A steady stream of faculty, staff, and students came to the costume shop to build costumes, but more importantly they came to make friends, to talk, to seek advice and to share sorrows and joys. In shaping costumes, she shaped lives and truly evoked the Dixie Spirit—A commitment to working hard, serving others, and loving unconditionally. Olive was an outstanding costumer not just because of her talent as a designer and seamstress, but because she cared deeply about her work and serving everyone she met.  Olive always offered a listening ear, sound advice, and a refrigerator full of Pepsi.

For Olive, life was full of wonder, and every moment with her was a party. She loved to be with people, laugh, tell stories, and be a part of the conversation. When she retired, Olive gave attention to her painting (watercolor) and assisted several noted artists in the Southern Utah area as a historical researcher to make sure that the details of clothing in their work were accurate. During those years, the Esplin cabin in Pine Valley, out of the valley heat, became a place of renewal for family and friends, where they found comfort, meals, and, especially, conversation with Olive and Spence.

The chairs are empty now, but we will always remember Olive’s laughter and welcoming smile. “Let her own works praise her in the gates.”