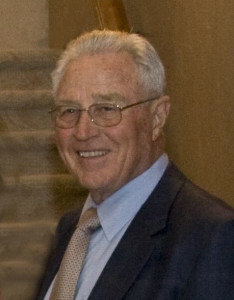 Fred Jack Lundin, age 82, passed away peacefully at his home on March 21, 2015. He was born on October 13, 1932, in Fremont, Nebraska, to Viola Mary Ibsen and Clarence John Lundin. His marriage to his sweetheart LuDeen Nielson was solemnized in the St. George, Utah Temple November 19, 1953, 62 years ago.

At 9 ½ years of age, he joined the Church of Jesus Christ of Latter-Day Saints. His family then left Nebraska and moved to St. George, Utah, where he attended school and graduated from Dixie Jr. College in 1953. Immediately after graduation he was drafted into the army during the Korean Conflict and he started basic training in Fort Ord, California, followed by his assignment to the Chemical Corp. at Fort McClellan, Alabama.

After his two year service, he returned to Dixie College for one year to prepare for dental school at the University of Nebraska in Lincoln. He graduated number one in the class of 1961. His dental career took him first to Snowflake, Arizona, then Mesa and finally to Lake Havasu City.

His hobbies were his pets, hunting, fishing, water recreation, and all sports, especially golf in his later years. He worked in scouting as a Scout Master and earned the Eagle rank as a young man. He served in many capacities in his church including a fulltime mission with LuDeen in the Connecticut Hartford Mission. Fred had a strong testimony of his Savior, Jesus Christ.