Are you ready for some football?

ST. GEORGE —The Dixie Rebels have played their last game, a 26-21 loss to the Wasatch Revolution in the Rocky Mountain Football League (RMFL) Championship game. The team will now play as the Zion Lions. 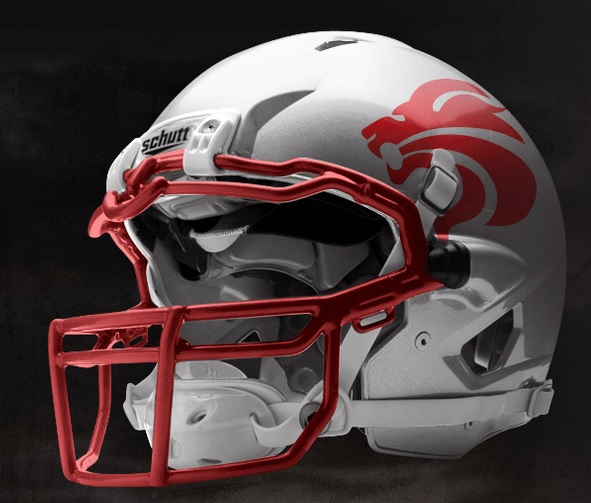 Owner/head coach Dale Stott is excited with the new changes being implemented along with the new name. “We addressed several areas of concern this year, both with the league and with the team,” said Stott.

The RMFL pared down to two divisions and adjusted the season schedule so that no team will play another twice before playoffs begin.

“We played the Rev twice last year then met them again in the Championship,” said Stott. “Even though we split with them in the season, that loss knocked us to the fifth seed and prevented us from hosting a playoff game, even though we were one of the top two teams.”

Stott is in his second year as head coach. He spent many years prior on the Pine View high school coaching staff. Assisting him in coaching this year will be player/coaches Kaleo Teriipaia, James Thompson, Brandon Thompson, Vince Feula and Tom Semmens.

Quarterback: Misiovala Tupe returns at the helm of the offense. Tupe, a former standout safety at Texas A&M and a member of the 2014 men’s National Championship 7-man Rugby team, led the RMFL in rushing last year (928 yards, 7.4 YPC). “Tupe has refined his shape, losing 30 pounds from last year,” said Stott. “His passing has improved exponentially. He is quicker. He will be hard to stop this year.” Backing up Tupe will be Rob Nadalsky. Nadalsky played college baseball but was a two-sport standout at San Luis Obispo. Nadalsky will handle the punting and kicking duties as well.
Running back: The backfield will have familiar faces. Former Dixie State standout Sione Tapuosi (364 yards, 6.9 YPC), who led the RMFL in rushing two years ago, returns at the fullback position. Rimo Mapu (318 yards, 5.9 YPC) will start at tailback. New this year is former NFL player Fahu Tahi. Tahi played for the Minnesota Vikings from 2006 to 2011. “All three bring something different,” said Stott. “Tapuosi will run over you. Mapu is a slasher. And Tahi is combination of both.”
Wide receiver: Tanner Wood (13 catches, 179 yards), a former Pine View player, Brennan Adams (21 catches, 465 yards) and Viliami Hafoki (6 catches, 99 yards) return for the wide receiver corps. They will be joined by newcomers Dalton Groskreutz, a Snow Canyon and Dixie State product, Kaden Hosner from Pine View, and Finau Lomu. “Lomu is called the Tongan Devin Hester,” said Stott. “He led the state in return touchdowns in high school and is very fast.”
Tight end: Dixie State alum Jordan Loo (9 catches, 130 yards) is the starter. Also seeing some action will be two defensive players, Douglas Roberts and Tui Tuiasosopo. “Our tight ends are there primarily for blocking purposes,” said Stott. Not respecting their receiving talent could be costly however as Loo showed big-play receiving last year.

Offensive line: The team returns a lot of beef up front, namely: Logan Stott at right tackle, Mark Egbert and Russell Hunt at the two offensive guards. New starters include Trevor Stott at center and KJ Piula at left tackle. “Piula is the most gifted big man I have seen in awhile,” said Stott. “He is very athletic for his size.”

Defense
Defensive line: The Lions return two standout defensive ends, Vince Feula and Doug Roberts. Feula is a former RMFL defensive MVP who played his college ball at BYU and Arizona and played professionally in the Arena league. Joe Feula will start at nose tackle. Rotating at the defensive line positions will be Josh Steinert and Tui Tuiasosopo.

Linebacker: On the outside, the linebacking corps will be book-ended by the Katoa brothers, Isaac and Thor. The Katoas played at Pine View. Andrew Misa will return at one of the inside spots. Matt Feula will start at the other inside linebacker. Brandon Thompson switched from the secondary to linebacker this year and will be part of the rotation.
Secondary: Hurricane High grad Trey Smith will start at one corner and Michael Matalolo will start at the other. At the safety position, Lei Angilau will play strong and Ryne Wall will play free. Also seeing plenty of action in relief and nickel packages will be Dom Vargas, Adam Parr and Shawn Mitchell, who led the team in interceptions last year.
Special Teams: Nadalsky will handle the punting and kicking duties. The holder is AJ Martinez and the long snapper is Trevor Stott. Lomu and Wood will be the primary returners.

The Lions’ first game is this Saturday at their new home, the Dixie Sun Bowl. They will play the second game of a doubleheader at that venue, featuring two teams from the RMFL against teams from the Wild West Football League. In the first game, the Brigham Sting will play the Las Vegas Trojans. The Lions will host the Las Vegas Hawks in the second game. Game time for the Lions is at 7 p.m. and tickets for 12 and older is $5.

The team is also running a promotion where a fan can purchase a team hat or t-shirt and the team apparel will serve as a pass for all the home games in 2015.

Why coronavirus precautions may be more important now than ever