IVINS – The city of Ivins will soon be home to a new Family Dollar store. The new retail outlet will be located on the southeast corner of the intersection of 400 S. and 200 East, which is currently vacant. 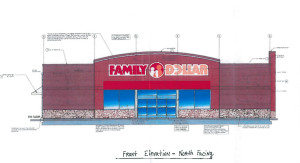 “It’s going to look a little different than a typical Family Dollar,” said City Manager Dale Coulam, “and will have a stucco exterior, with rock trim. It’s going to be a very attractive building.”

Residents are welcoming the retail opportunity, and the location is right on a bus route with a bus stop in front of the new store, Coulam said.

There has been no opposition to the planned Family Dollar store at City Council meetings, and the company has been very easy to work with, Coulam said.

“They’ve been very considerate in their planning,” he said. “They seem to be very welcomed. It seems like a very positive reception for them.”

A building permit for the project was issued Tuesday, said Ivins Deputy Recorder Sharon Allan, and construction can now begin.

Construction could start within a month, Coulam said. The final minor changes in the building plans required by the city related to drainage on the site. The city required some onsite detention for drainage of rain water, meaning some kind of structure that slows down runoff water from the store and its parking lot, and those changes have been made.

Additionally, improvements will be made to 200 East when the developer digs up the street to install a sewer line. The improvements should actually improve drainage in the area, Coulam said.

Family Dollar is a publicly traded company founded in 1959 in North Carolina. The company operates 8,000 stores in 46 states, employing 50,000 workers.

‘With lighting the fireworks off comes responsibility’: Here’s what you need to know about fireworks safety this holiday