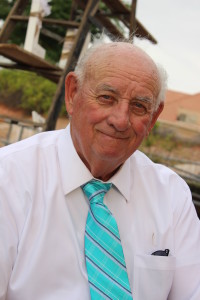 Lynn K. Bryson passed away on Wednesday, February 25, 2015, at his home in Enterprise, Utah, after a courageous battle with cancer. He was born on August 25, 1937, to Glenn Holbrook and Ellen King Bryson.

He was a devoted husband and companion, father, grandfather and great-grandfather. Lynn was a dedicated fireman for 56 years with the city of Bountiful and Enterprise. He served as an LDS bishop, high councilman, stake missionary, scout master, young men’s leader, and primary teacher. He was employed with the Davis County School District as the school bus shop foreman and transportation director. He later became the area distributor for the Blue Bird School Bus Company for 38 years.

After retiring, he moved to Enterprise, Utah, with his wife. He served as a captain for the Enterprise Fire Department. Lynn was instrumental in acquiring equipment and two fire trucks still in use today. He enjoyed gardening, restoring cars, carpentry, piloting single engine airplanes, hunting, fishing, snowmobiling, four-wheeling, and spending time “in the mountains” at his cabin.

Lynn’s family would like to express their appreciation to Dr. Karen Lin and staff for caring for him during his time of need.