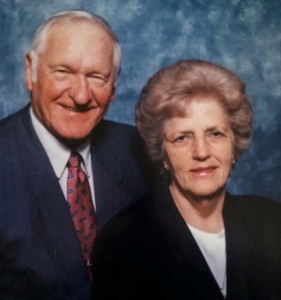 On February 16, 2015, our beloved father, grandfather, and great-grandfather, Kay A. Hale, age 88, peacefully left his earthly home to reunite with his one true love, MarJean V. Hale.

Of faithful pioneer heritage, Kay was the sixth in a family of eight boys and one girl born in Afton, Wyoming, on January 27, 1927, to Louis Holbert (Whitey) Hale and Lois Angelia Allred. Kay was active in sports and outdoor activities throughout his life. He graduated with the class of 1945 from Star Valley High School, where he met and fell in love with MarJean Vail. They were married for time and all eternity on September 2, 1947, in the Salt Lake Temple.

Kay accepted a position with Mountain Fuel Supply Company and made Murray, Utah, his home, where he and MarJean raised their children, inspiring them by example with faithful and virtuous principles, teaching them to work hard and to love and cheerfully serve mankind.

Kay worked for Mountain Fuel until he retired at age 55. To Kay, people were the most important piece of life, and he made friends wherever he went. He became involved in the Murray Rotary Club, the Murray Chamber of Commerce, and the Lions Club, where he served the community and provided humanitarian support at home and abroad.

To Kay, service to the Lord was where he found his greatest joy. He faithfully served throughout his life in many positions within the LDS church. After retirement, Kay and MarJean were called on a mission together to the Atlanta Georgia Temple, where Kay served as a sealer.

Following their mission, they moved to St. George, Utah, where Kay served as Branch President. Kay and MarJean were about to submit papers to serve another mission, when he was called to serve as a sealer in the St. George Utah Temple. He served 30 years in this capacity before being called home.