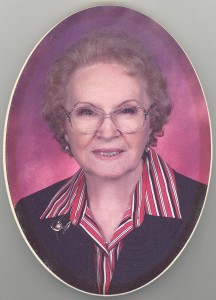 Ann Huckaby passed away February 2, 2015, in St. George, Utah. She was born July 26, 1928, in Princeton, New Jersey, to Antonio D. and Elitha Mae (Shepard) Adamo. At an early age her family moved to Redlands, California.

She attended school in Redlands, California, and graduated High School in Oceanside, California.

Her interests in community service led her to membership with the Cotton Women’s Club serving as President in 1967.  She also served two terms as President of the San Bernadino Community Hospital Volunteer Auxiliary.  She was appointed by Gov. Brown of California to serve on a board of the California Hospital Association in the early 1970’s.  She was a docent for the Kimberely Crest Historical Home and later for the San Bernardino County Museum.