WASHINGTON CITY – In the wake of an uproar over what Washington City may be doing with the Warm Springs, or Boilers, as well as questions about transparency, Washington City officials responded to questions from residents concerning the matter during a public forum.

Questions were also raised by local media regarding whether or not the city violated a permitting process related to federally-protected water use. City officials said they had not, which was later confirmed by a representative of the Army Corps of Engineers. 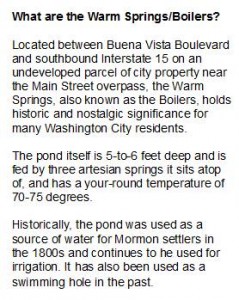 Last week residents attended a public forum held by the Washington City Council. While any issue was up for comment, the big topic of the evening concerned what the city was doing with the Warm Springs. The spring holds historic and sentimental significance for many city residents.

“There’s no clarity on what’s happening,” resident James McFadden said. He and others at the Jan. 27 meeting said it didn’t feel like the city had been wholly transparent about its future plans for the spring. “There’s been no open discussion on it that I know of,” he said.

Recent media reports stated the city had taken down the fence that has surrounded the Warm Springs since the late 1990s – originally set up for public safety reasons – and had plans to create a park around the pond. Other media sources suggested city officials may have violated permitting regulations related to federally-protected water ways.

City officials have said the process has been completely open to the public. As for permitting violations, for the time being, an official with the U.S. Army Corps of Engineers said the city hasn’t done anything wrong.

Nothing has been more transparent than the Boilers, officials say

Councilman Ron Truman said the matter of taking down the fence was briefly discussed in a public meeting in December.

“There was a meeting where it was discussed – a planning meeting – so anyone could have attended and participated in discussions,” he said.

In hindsight, Truman said the city could have done a better job of informing the public.

As for a public hearing, city officials have said it wasn’t required in this case, as no zone change or other applicable process was taking place.

The Warm Springs and the land around it is owned by the city and is already zoned to be a park or trailhead-like area at some point in the future. As such, the city has the right, like any other property owner, to make what they consider improvements to the property, officials said.

City officials said some negative press they’ve received has focused on the possibility that they willfully ignored applying for a needed permit from the U.S. Army Corps of Engineers.

The question is whether or not Washington City has jurisdiction over the Warm Springs, or if the Army Corps of Engineers does. The city has proceeded with the belief the Warm Springs isn’t under the administration of the Corps.

“If it is deemed to be a protected area, then the city will go through the (permitting) process,” Truman said.

Currently, Washington City is working with the Corps of Engineers on a delineation study which should determine who holds authority over the Warm Springs, said Mike Shaw, the city’s public works director.

“We regulate the waters of the United States,” said Patricia McQueary, of the Army Corps of Engineers St. George Office.

Specifically, she said, the Corps regulates waterways and watersheds that connect other waterways, such as the Virgin River, which drains in the Colorado River. Another factor the Corps looks at is the quantity of water that flows down the tributaries and washes.

Anyone wanting to impact the “waters of the United States” would need to go to the Corps to determine jurisdiction first. If the Corps claims jurisdiction, then the permitting process – which includes review by both the Corps and Environmental Protection Agency – takes place.

The delineation study should determine if the Warm Springs is an isolated body of water or if it drains into the nearby Virgin River.

Both Shaw and Washington City Mayor Ken Neilson said the Warm Springs does not drain into the river.

Water from the Warm Springs is used for irrigation, Neilson said. Some residents in the downtown area still hold private irrigation rights attached to the spring.

“They’ve always worked under the assumption that it always was nonjurisdictional,” McQueary said. “Washington City has done everything they’re supposed to do. They’re not in any kind of trouble; they’ve gone through the appropriate channels.”

For the time being, the city is done with the Warm Springs. A work crew took down the fence, cleaned out some of the brush around the pond and moved earth up to the cleared portion of the pond’s edge. There was talk of setting up some picnic tables near the pond, but that was the extent of it.

“They could have done less of a hatchet job,” a city resident said at the Jan. 27 meeting about the current state of the Warm Springs.

Washington City Mayor Ken Neilson had previously told St. George News and other media that the city was planning a park around the Warm Springs, but at this point that no longer appears to be the case, at least in the near future.

“Whether we make a park out of it now is immaterial,” he said. “It’s designed to be a park. I don’t know what’s wrong with a park, but at this point that’s the end of the story. Really, Warm Springs is for irrigation. It’s not a swimming hole or a park, it’s an irrigation place.”

Members of the City Council expressed surprise and some frustration with the backlash from the public over the Warm Springs, part of which has been fed by negative coverage in the media, they said.

“I see this more as a policy change,” Seegmiller said, “We just took the fence down and cleaned it up.”

If anything, all the public attention over the last few years put pressure on the city to open the Warm Springs up again, Councilman Jeff Turek said. The pond is now open to residents to visit and enjoy at their leisure.

One of the loudest proponents of taking down the fence was the Boiling Springs Ecoseum & Desert Preserve nonprofit group, Seegmiller said, adding they should take be the ones to take credit for finally getting the city to act.

The nonprofit group wants to work with the city to preserve the Warm Springs and nearby Mill Creek Canyon.

“I guess the moral of the story is that no good deed goes unpunished,” Truman said.

Where does the Ecoseum stand?

“I think there’s a perception that opening the Boilers somehow excluded the Ecoseum, that’s not true,” Truman said.

Turek said that, aside from taking the fence down, the city had not made any decision on what to do with the Warm Springs. Other council members said they were looking forward to hearing from the nonprofit group in its upcoming Feb. 10 meeting.

While Warner said her group is happy to see the fence gone, they would have gone about cleaning up the site a bit differently, but that’s beside the point now.

“Our focus is to keep moving forward with the goals to protect the Boilers,” she said.

In an ironic twist, the public backlash caused by the negative press brought focus back to the idea of preserving the site, Warner said. She hopes that focus continues, she said.

“It’s really important to pay attention to the process,” she said. “The citizens can have a profound impact if they stay engaged.”

The next public meeting involving the Warms Springs is scheduled for a City Council workshop meeting Feb 10 at 6 p.m. at the Washington City Hall, 111 N. 100 East.

'The concerns of the people aren’t being addressed'; Washington City considers zone change in Fields area

Southern Utah, Dixie State universities to welcome students back for in-person classes in the fall