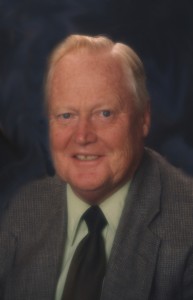 William (Bill) Blaine Olsen, age 80, of Washington, Utah, returned to his Heavenly Father on Tuesday, Dec. 30, 2014. His wife of 51 years, Tereece Grover Olsen, was at his side.

He was born May 11, 1934, in Peerless, Utah, to Louis Blaine Olsen and Katherine Nelson Olsen. He is survived by a brother, Robert Earl Olsen; and a sister, Susan Olsen; his children and their spouses: William Russell Olsen (Diana), Erik Louis Olsen (Kathleen), John Blaine Olsen (Melanee), Katherine Marie Penrose (Michael), and Kurt Andrew Olsen; 12 grandchildren; and six great-grandchildren. He is preceded in death by a grandchild, Christian Andrew Olsen.

He was raised in eastern Utah and graduated with a Bachelor of Science Degree from the University of Utah and later received a Master’s Degree from Utah State University.

Bill served in the army during the Korean War and, after being honorably discharged, then served an LDS mission to Denmark for three years.

After marriage, he lived with his family in southwestern Montana for a few years before moving to St. George, Utah. They soon purchased a home and property in Washington, Utah, where they have remained for the past 45 years.

Bill enjoyed yard work and gardening and visiting his kids and grandchildren. He also was an active member of the American Legion.

Bill was an active member of the LDS Church throughout his life and served in many callings in service to his fellow man and his Savior.