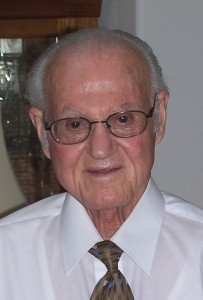 Dale H Harper, age 90, passed away December 29, 2014, at the Ivins Veteran Home.  Dale was born in April 23, 1924, in Salt Lake City, Utah, to Lester John Harper and Ida Ellen Jones.  His beloved wife Lorina Bay Harper lovingly attended to him for years, including providing tender care for him at the hospital and the Veteran’s Home.

Dale grew up in Southern California and enjoyed fishing, recreation and family.  He enlisted in the U.S. Army Air Corps in World War II and served as navigator and top turret gunner in B-17’s.  He flew bombing missions from North Africa and Italy before being shot down.  He spent the last part of the war as a POW and was moved from camp to camp towards Berlin as the Allies approached.  After the war, he re-enlisted for electronics training during the Korean War before joining the Air Force Reserves.  Dale earned his bachelor’s degree and spent many years teaching in schools in Idaho and Utah.

His loved camping in Yellowstone Park, traveling along the Oregon Coast, buying new cars, and building and selling new homes after the family finished the basement and put in the yard and fences.