WASHINGTON CITY – Traffic stalled for a short time Sunday morning near the intersection of 700 W. Telegraph Street in Washington after the wheels of a semitrailer rolled over the hood of a car when the driver reportedly made too sharp of a turn.

Just before 11:30 a.m., a man and his wife, traveling in a Toyota Avalon, were heading east in the parking lot near Chase Bank, Washington City Police spokesman Ed Kantor said. After the car stopped at the stop sign, a semitrailer, traveling north, began making a left-hand turn to head west, misjudged the turn, and clipped the front-end of the Avalon, Kantor said.

The driver of the Avalon, John Day, of St. George, said that when he saw the angle the semitrailer was headed toward him, he tried to put the car in reverse and get out of the way, but it was too late.

“Scared the heck out of me,” Day said. “It was coming up over the top of the car and I thought his duals were going to come right in the cab. And he just kept coming.”

When the collision occurred, Ronnie Morales, of St. George, said she was standing on the curb, just a few feet away, sipping on a cup of coffee.

“The semi cut it too short and ran over the top of the Avalon, crumpled the hood and tore off the bumper,” Morales said. “It sounded like a crunch and then glass shattering. Both driver’s eyes were as big as saucers. I could see the driver shrieking.”

Washington City Police and Washington City Fire Department responded to the scene. Traffic was stalled for a short time while the vehicles were moved out of the roadway and the Toyota was towed from the scene.

No citations were issued because the collision happened in a parking lot which is private property, Kantor said.

Clicker on photo to enlarge it, then use your left-right arrow keys to cycle through the gallery. 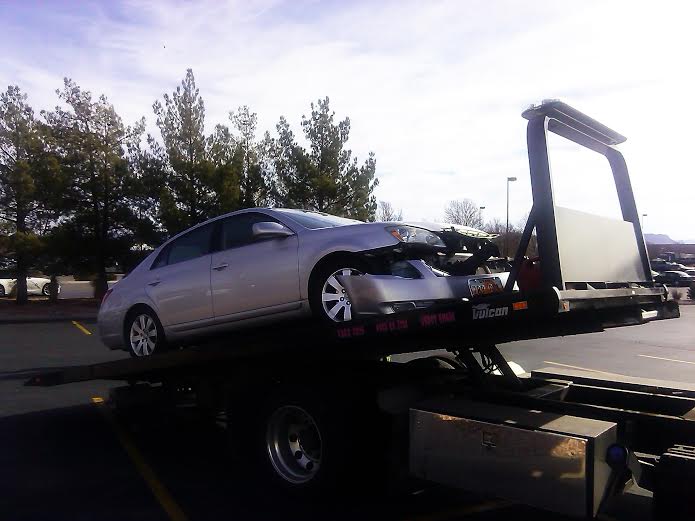 A Toyota Avalon is towed after a collision that occurred in the parking lot near 700 W. Telegraph Street, Washington, Utah, Dec. 21, 2014 | Photo by Aspen Stoddard, St. George News