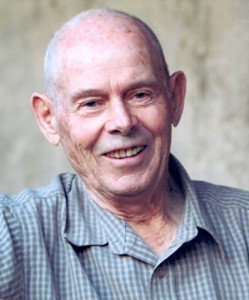 On December 18, 2014, Thomas Clark Terry was called back to his heavenly home to be reunited with his parents and all five of his brothers and two sisters that preceded him in death.

Thomas Clark Terry was born January 13, 1932, in Enterprise, Utah, in the back bedroom of the family home. He passed away in the front room of that same home.

Thomas was the fifth of 11 children, He grew up in Enterprise and on the Terry Ranch just west of Enterprise working cattle and farming with his father and brothers.

He joined the U.S. Navy in 1951 and spent the next four years serving his country during the Korean War. He served on a sub-tender the “USS Nereus” out of San Diego and Pearl Harbor. As fate would have it, Tom’s best friend in the service was married to a gal that was the best friend of Mom. A blind date was arranged and they spent the next two years as pen pals. At the end of the Korean War, Tom and Phyllis were married in Berkley, Michigan, on May 19, 1955. Tom converted and baptized Mom into the Gospel. While in Michigan, they were blessed with three children: Suellen Kay, Craig Thomas and Allison Gae.

In 1972, the family drove out to Enterprise from Michigan and went through the St. George LDS Temple to be sealed as a family for all eternity. Family and friends from the area were able to be with Dad and support us all.

Dad was known as Thomas in the Navy and Michigan, and in Utah he is and always will be Clark.

The family resided in Michigan until 1978, then moved to Las Vegas, a little closer to home for Dad. In 1990, Dad retired and the family moved again – back to Enterprise for Dad; nearer the beloved Terry Ranch and the brothers and sisters who resided in the area.

He was preceded in death by his parents: Marion and Leona Terry; brothers: Merlin, Dean, Lloyd, Carlos and Wayne; and sisters: Gae and Alta.

The family wishes to express our sincere appreciation and love to the following people that loved and cared for Clark as much as we did: Southern Utah Home Health Care: Terron, Ashley, Kayla, Rocco, Nicole and Joe; and Dad’s angles, Shirley Pickering and Martha Pickering.