“Utahns should be proud that our unemployment rate continues to be among the lowest in the nation and every month more people are back at work,” Gov. Gary R. Herbert said in a press release. “Our economic growth has been impressive and steady with job growth in all sectors of our economy.”

Most southwest Utah counties found themselves in job-creation mode during the second quarter of 2014, with unemployment rates reaching the lowest levels in half a decade, Lecia Langston, senior economist for the Utah Department of Workforce Services, said. A tighter labor market may begin to put upward pressure on wages in the larger counties.

“That’s down more than a percentage point since last year and marks the lowest level in six years,” she said.

Iron County, with two good quarters of employment growth under its belt, appears to have finally shrugged off its lackluster post-recession performance to embrace recovery.

“Iron County’s unemployment rate dropped almost a percentage point over the past 12 months to register 4.2 percent in September 2014,” Langston said.

On the other hand, after a three-year stretch of job losses, Garfield County has managed a bit of year-to-year job growth; and Beaver County lost jobs. Neither county will be economically sound until they can show consistent employment gains across a broad range of industries, Langston said. 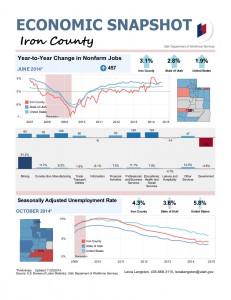 Semi carrying nearly 80,000 pounds of muffins rolls, lands upside down off of I-15