NEWS LIVE: This report contains news live as it develops and is being updated continuously. Bookmark and refresh the page periodically for updates. Last updated 2:15 p.m. – see updates at top of the story.

ST. GEORGE – A search for four suspects that fled a vehicle and ran into the desert west of Interstate 15 at the Port of Entry near the Utah-Arizona border is ongoing and a citizen alert has been issued to residents in the nearby areas, particularly those in the SunRiver St. George community.

Three of four suspects that fled a stolen vehicle near Utah’s Port of Entry Tuesday morning appear to have been caught by Arizona Department of Public Safety’s highway patrol division. The three are detained on the side of Interstate 15 at Arizona milepost 26.5, about one-half mile south of Black Rock Road Exit (27), Arizona DPS Sgt. John T. Bottoms said.

“Right now, the (Arizona DPS) has detained three individuals, two females and one male,” Bottoms said, “and we’re working with the St. George Police Department to see if they’re related to the incident this morning.”

A woman reported at 9:43 a.m. that a Mercedes Benz SLK320 was stolen from her garage on the 4900 block of Bonita Bay Drive in the SunRiver St. George subdivision this morning, Giles confirmed in a public statement Tuesday afternoon.

The vehicle is described as a white 2002 Mercedes SLK320 roadster with a purple heart license plate. Investigation is ongoing at about 1:15 p.m. into whether or not the stolen Mercedes is connected to the morning incident near Utah’s Port of Entry.

SunRiver is a residential area near the area where the four subjects abandoned the truck involved in the incident.

The citizens alert issued as a reverse-911 by phone, text and by email reads:

Criminal Suspects in the area

St. George Police are actively looking for 4 individuals that crashed a stolen car and fled from officers on foot in the area of Sunriver and Bloomington.  2 males and 2 females.  Male has a goatee, shaved head and tattoos.  Female is about 5’2″ and 170 lbs with dark hair.  The 2nd female is possibly a Hispanic female.  Please secure your vehicles and other property and report any suspicious activity to the St. George Police at 435-627-4300

Four people, two men and two women, who police estimate are in their 20s or 30s, have led St. George Police and other agencies on a chase that started with a traffic stop on a 2009 Chevrolet 4-door pickup truck just after 4 a.m. for speeding.

“A St. George officer observed a vehicle on I-15 traveling at 85 in a 65 zone and he made a traffic stop just north of Exit 2 here,” St. George Police Captain Mike Giles said, “made contact with the occupants – there were two males, two females.”

“The officer made attempts to call the occupants out so that he could pull them away from the truck,” Giles said. “When he did that, the occupants yelled at the driver to “go;” the driver accelerated and in the process hit some sort of cement abutment somewhere along I-15 and blew the tire.”

The officer did not pursue the truck at that point but did watch it travel southbound, Giles said, and then saw some dust and debris further south from where he was located.

The truck sustained a flat tire when it struck a cement lane divider as it drove away from the officer’s location, a statement released by the St. George Police Department said. The officer located the truck in the median just south of the Port of Entry where there is an emergency vehicle turnaround that crosses the median.

The vehicle was empty when the officer arrived, Giles said.

“The four occupants from the vehicle had left and went on foot – we believe westbound – into the desert area,” he said.

Utah Highway Patrol was contacted and dispatched its helicopter, Star 8, to assist with the search. Deputies that were on-duty with Washington County Sheriff’s Office also responded to assist when the incident began. Additional St. George Police Officers were called out quickly to assist with the initial canvass, Giles said.

By about 8 a.m. officers on scene involved in the search had located items believed to be ditched by the subjects, apparently running west at that time from the crashed truck, including a purse and girl’s shoes. About 50 feet further west they found a spring-loaded pellet or B.B. gun and a towel.

According to the police statement issued later, two pistols were found in the vehicle and area of the search but appeared at that point to be airsoft and/or b.b./pellet guns.

“They’ve been verified not to be firearms as in shooting bullets …,” Giles said. “We don’t know if they’re armed with any actual firearms but the ones that we found so far are the very realistic looking pistols so at a distance or from a glance you wouldn’t be able to tell if they are real or a B.B. or pellet gun.”

At 8:45 a.m., the police department released a photo of a person it believes to be one of the suspects, and reported that officers are still searching the desert area surrounding the crash site.

A citizen notification was sent to the residents in a mile radius of the area. Citizens are asked to call 435-627-4300 if they see anyone suspicious that they feel may be associated with this incident. Do not pick up hitchhikers or allow strangers into your residence. The subjects will likely be looking for a means of transportation or somewhere warm to recover. Photos of the suspects will be posted soon.

Right now we’re asking citizens if they see anything suspicious, or if they see pairs or that group of four people or anything that doesn’t quite seem to fit the area – we believe they’ll probably be looking for transportation or warmth, shelter, food – just use caution, don’t invite strangers into your home; be careful about picking people up. If you have concerns, notify the police department at the 435-627-4300 telephone number. We can have officers come out and check.

This is a developing story, refresh page for updates. 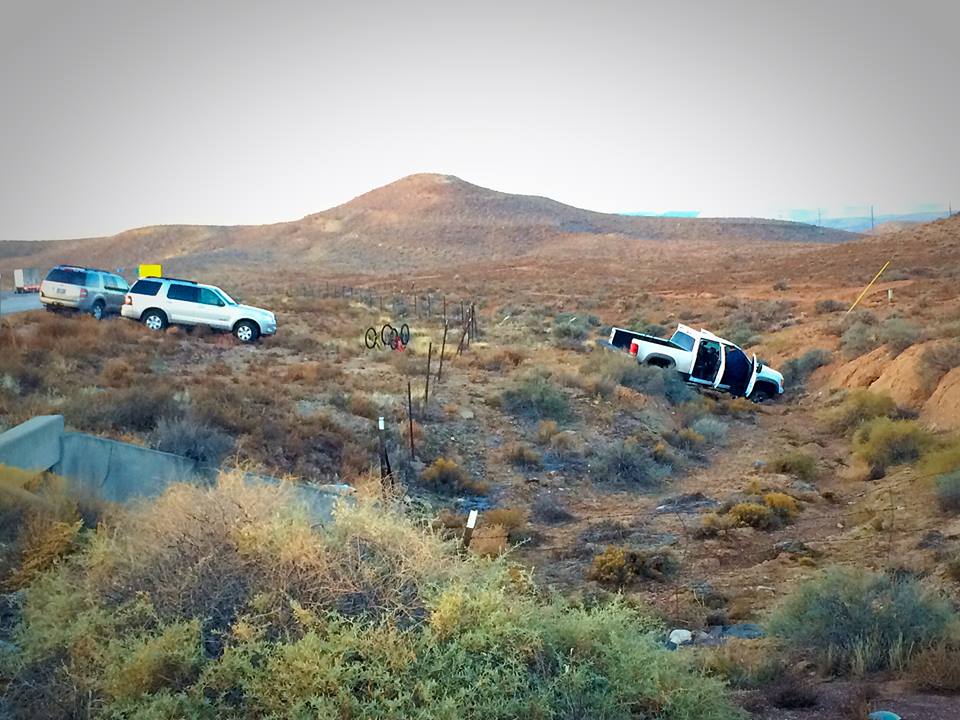 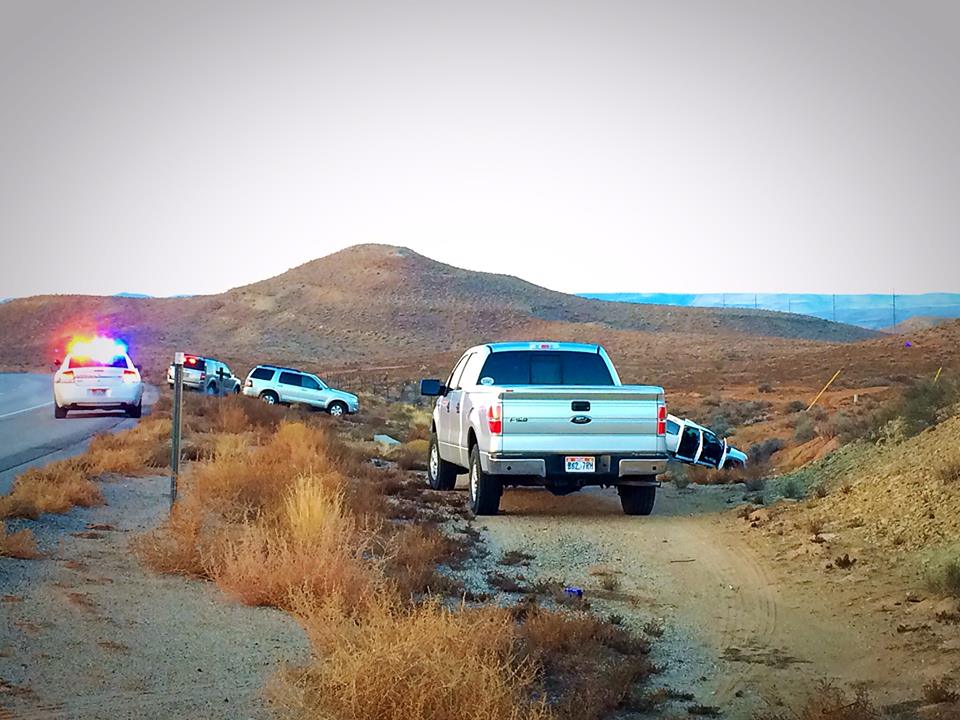 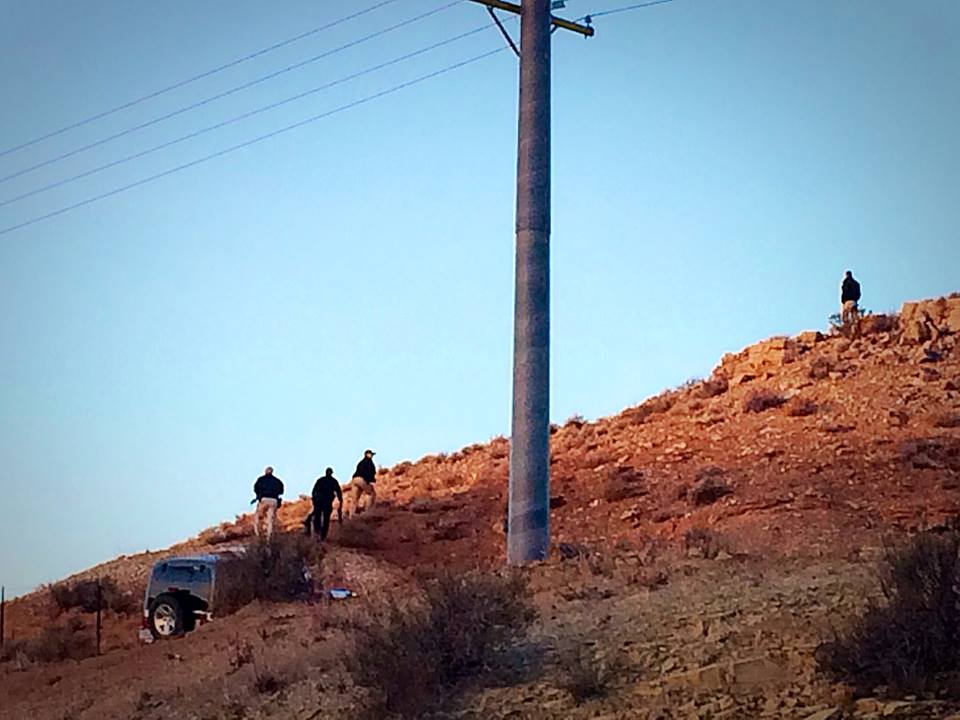 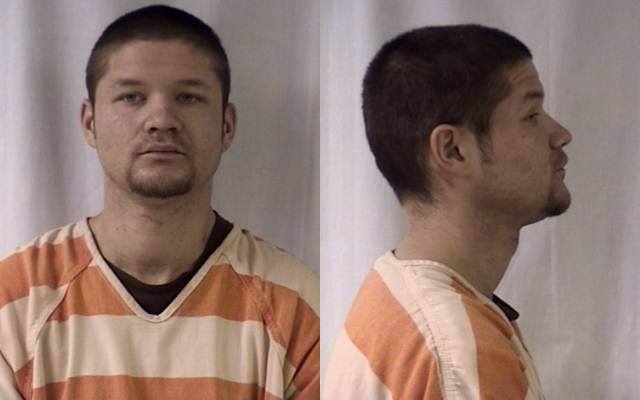 One of the possible suspects under pursuit by law enforcement in the area of Point of Entry at Utah's southern border, St. George, Utah, Dec. 9, 2014 | Photo courtesy of St. George Police Department, St. George News 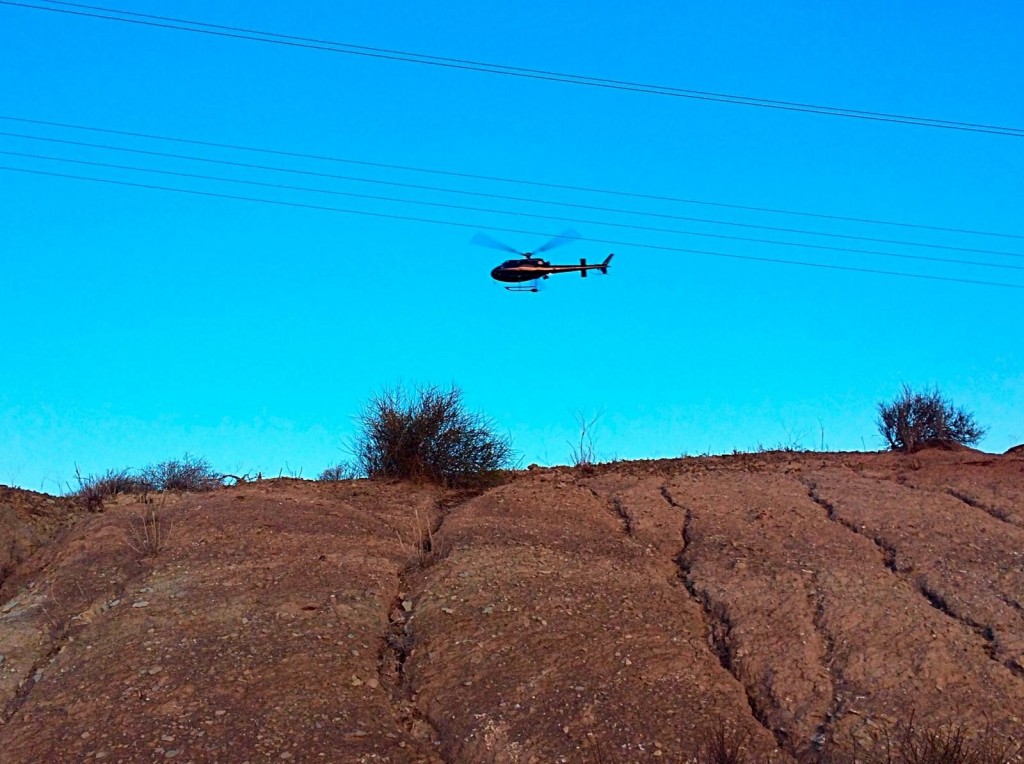 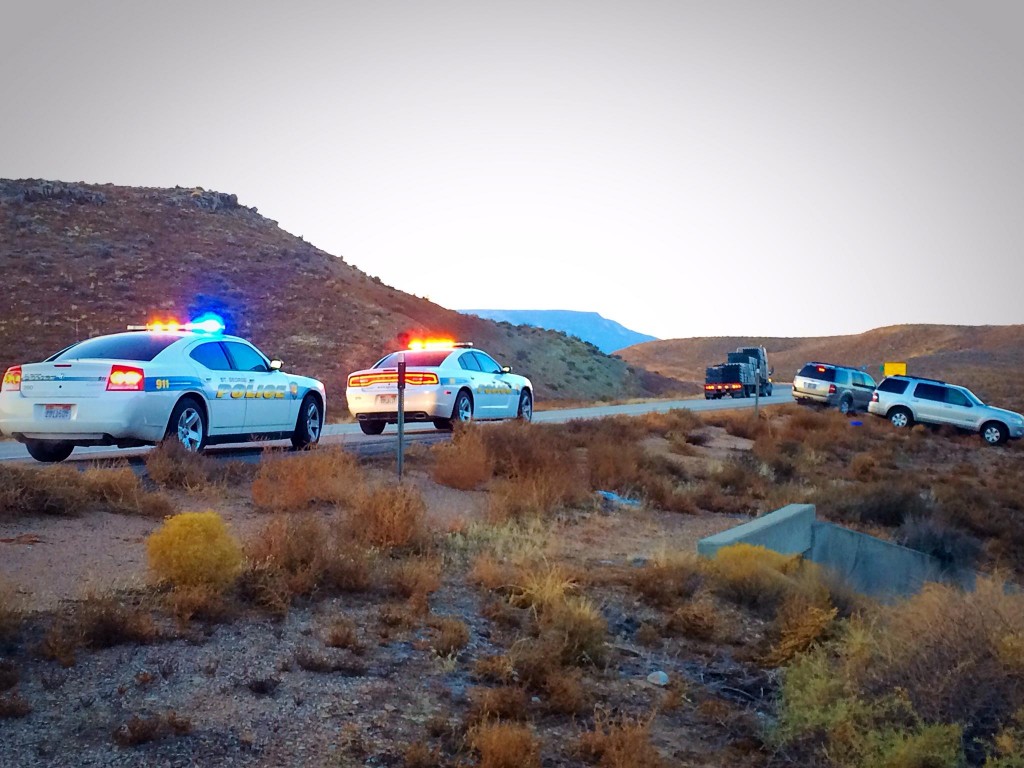 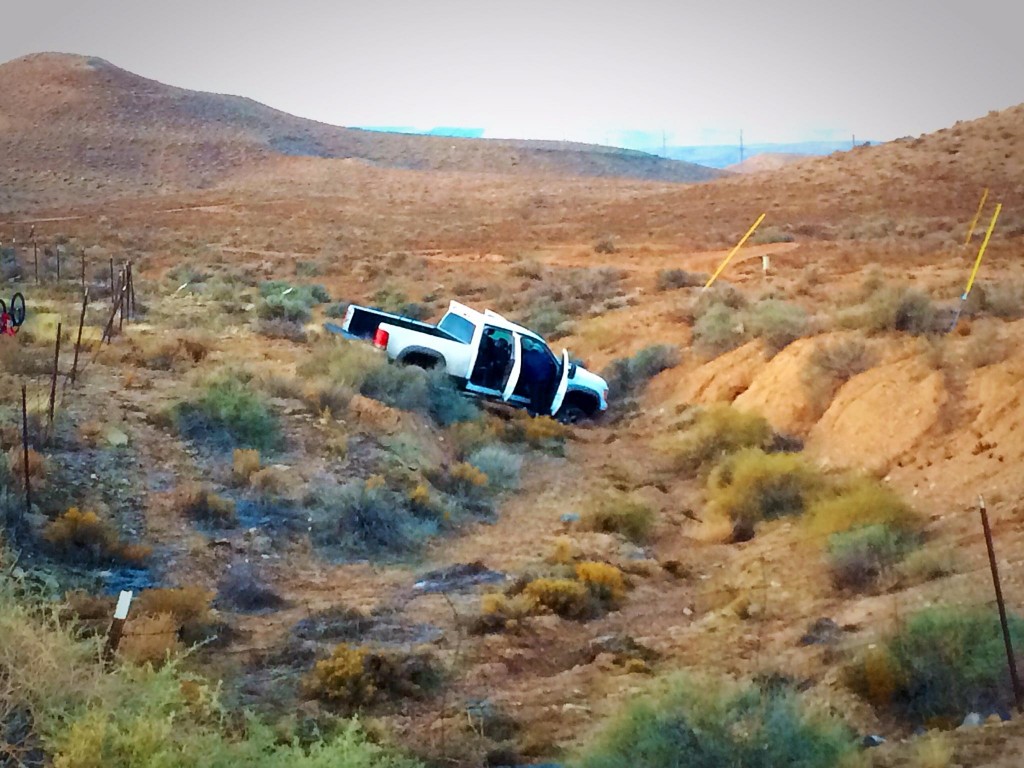 Semi collides with Jeep on I-15, sending 2 to hospital

UHP says woman reaching in bag causes rollover on I-15

'This is a huge need'; First adolescent mental health treatment facility to open in St. George