ST. GEORGE – On Monday afternoon representatives from the Washington County Republican Women met with Dixie State University President Richard Williams to present the university with a check for $15,500 to help fund the “Embracing Our Heroes Scholarship.”

The scholarship was created to help veterans or spouses of veterans with tuition and expenses while attending Dixie State University. Money from the fund, which has now totaled $30,000, has so far gone to help 16 students receive their education at DSU.

“Embracing Our Heroes” got started when the first group of soldiers returned from Iraq, Wilma Courtney, chairwoman for the Caring for America Committee of the Washington County Republican Women, said.

The committee, which is the charitable arm of the Republican Women, raised money to hold a welcome home dinner for the soldiers as well as to purchase flags that had flown over the nation’s capitol to give to each of the servicemen and women, Courtney said.

When all the expenses were paid, there was about $1,500 left over, Courtney said.

“We had a discussion about what we ought to do with (the money),” Courtney said, “and I said that I had promised people that all the money would go to the veterans and that is how we came up with this scholarship.”

Since its inception, the scholarship has been primarily funded by donations with the donors being entered to win a handcrafted patriotic quilt, Washington County Republican Women Communications Chair Lisa Thorpe said.

Each year, Courtney and Republican Women member Colleen Willis created a unique and patriotic quilt in recognition of veterans to offer as a prize for those who donated to the scholarship fund. Quilts were taken to political and fundraising events all over Utah in order to garner more donations. This year’s quilt was won by state Sen. Evan Vickers.

The effort means a lot to Courtney, she said, who has a long family history of veterans; including her husband who spent over 18 years as an In-Flight Refueling Specialist for the Air Force.

The scholarship has helped several students, including spouses of disabled veterans who were given the opportunity to receive an education and a means to support their family, Thorpe said.

“Our veterans and our spouses of veterans – I don’t think people realize the difficulties and the struggles the families go through,” DSU Scholarship Coordinator Susan Perschon said. “This money is so needed and so appreciated.”

As scholarship coordinator, Perschon said, it is her job to let students know that they are the recipients of the funds and, she added, it has been her great pleasure to see the reaction of the students when they are notified.

Williams praised the Republican Women for their efforts, calling the scholarship “the best kind of scholarship.”

“It shows how much of an impact the community has,” the university president said. “What these women have done for us … these are the best kinds of scholarships, the kind that work so hard to really put the students first and give them an opportunity where they wouldn’t have an opportunity.”

Due to health issues, the women will no longer be making the quilts, Courtney said, and are now looking for other means to support the scholarship.

“Since we are not going to be doing the quilts anymore, which, by the way, required a ton of time and work over the years,” Thorpe said, “we are now looking for other avenues of funding the scholarship.”

The Republican Women hope to get the community involved in their efforts to continue the scholarship and welcome ideas.

“We need to get the community fired up,” Courtney said. “We live with good people.” 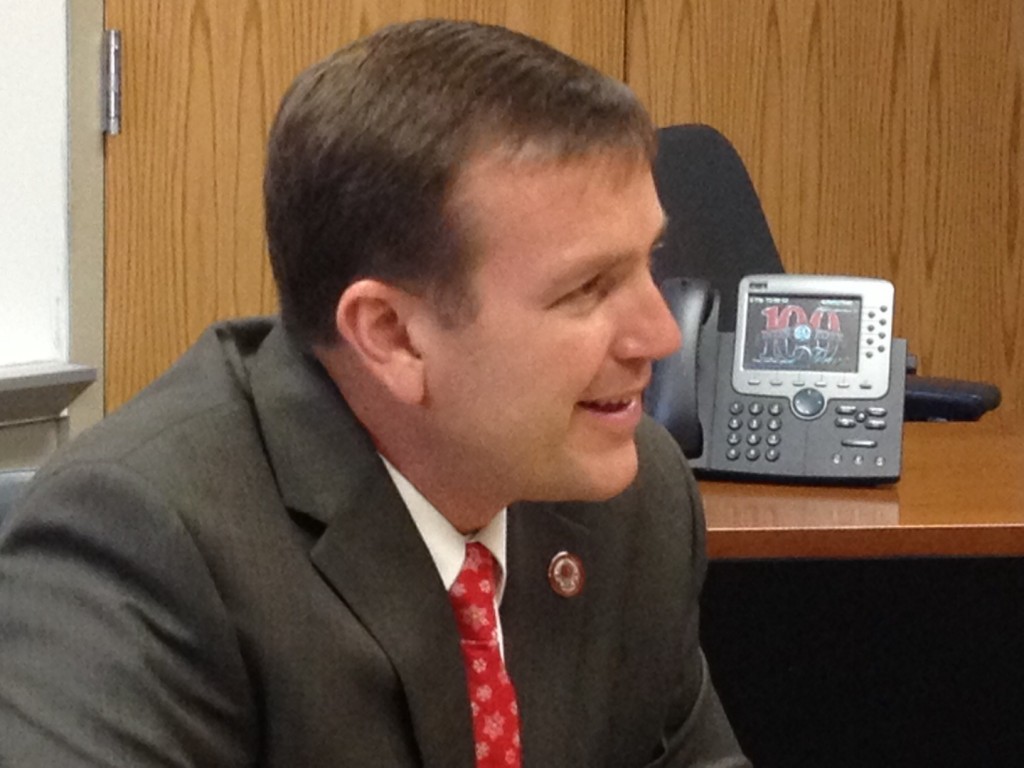 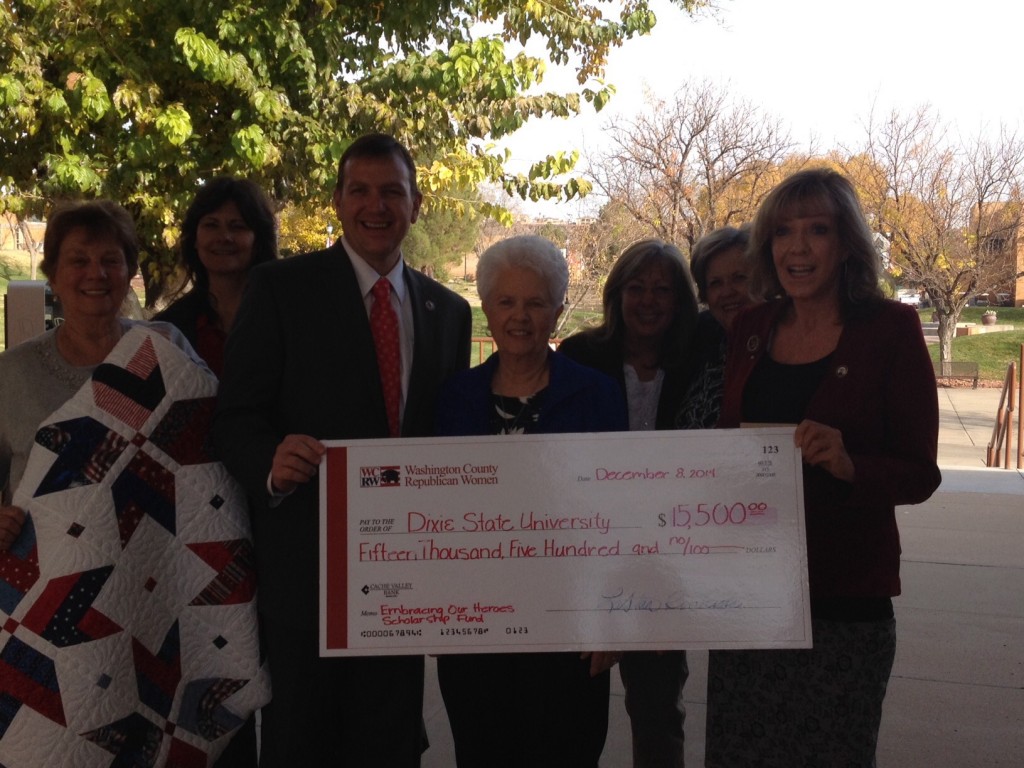 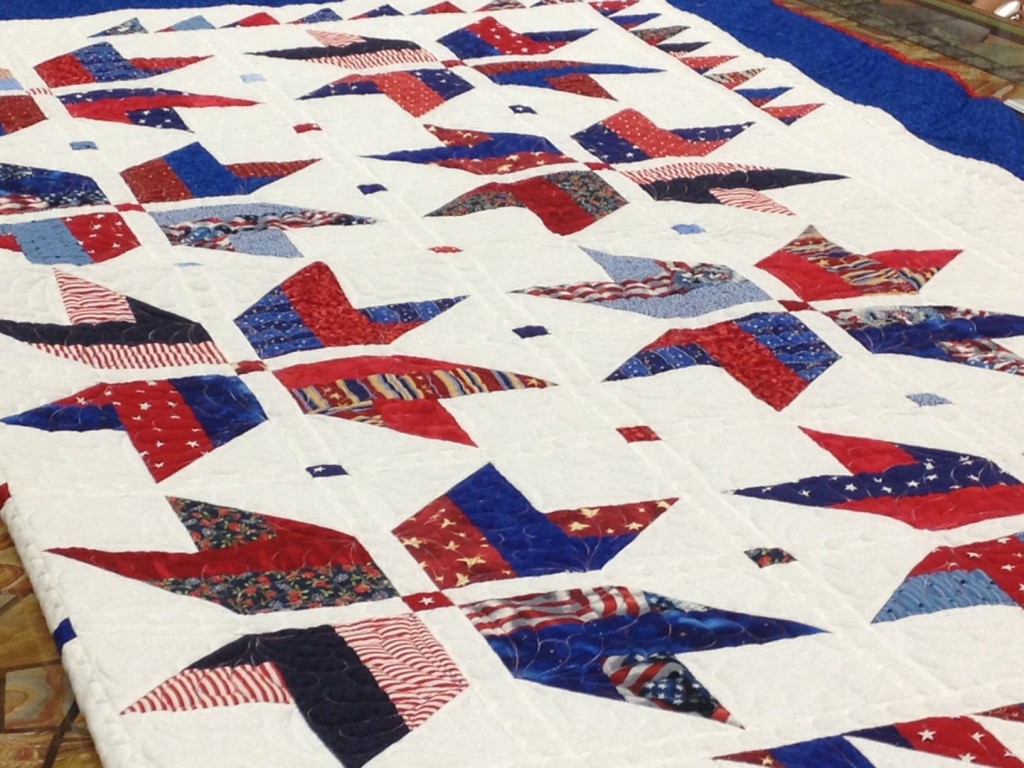 A patriotic quilt made by Wilma Courtney and Colleen Willis is shown to DSU President Richard Williams during a check presentation for the "Embracing Our Heroes Scholarship" which benefits veterans and spouses of veterans. St. George, Utah, Dec. 8, 2014 | Photo by Hollie Reina, St. George News 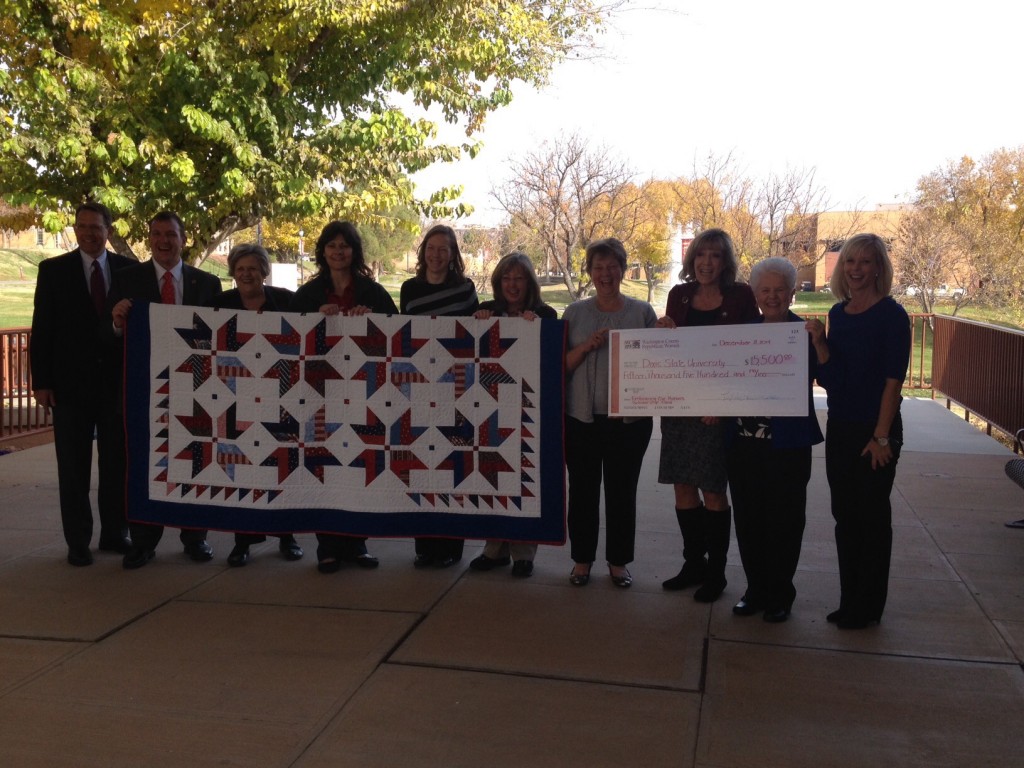 Letter to the Editor: Dixie State provost on providing access, opportunity as an open, inclusive university

Letter to the Editor: Dixie State provost on the comprehensive polytechnic advantage

Letter to the Editor: Why build Lake Powell Pipeline when expanded wastewater treatment is an option?

More contagious variant of COVID-19 arrives in Utah; Some vaccine sign-ups for 70 and over now online