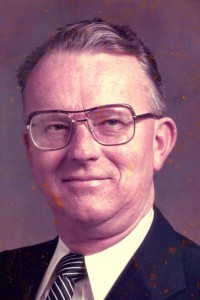 On November 25, 2014, one day after his 84th birthday, Richard Houston passed away quietly in his St. George, Utah, home. His loving wife, Nubia, was with him as he journeyed from this world to the next.

Richard “Dick” was born on November 24, 1930, to George and Elsie Houston in San Francisco, California. As a young man, Dick developed his life-long love of the outdoors, working with his hands, and personal drive to always do his best.  Dick joined the Boy Scouts and earned his Eagle Scout Award. Growing up near the ocean and the Sierra Mountains, Dick became an avid fisherman, and camper, pastimes he cherished throughout his lifetime.

Dick attended UC Berkley, graduating with an engineering degree. There he met and married Jean Holt on July 26, 1952.  They moved to Long Beach where Dick joined Proctor and Gamble. They had two children, David and Kathy. Dick’s work took the family to Cincinnati, Ohio, then back again to Long Beach, CA as Director of Proctor & Gamble’s West Coast Operations.

During the next few years, there were several changes in Dick’s life. He moved to Los Angeles, California, where he met Nubia Ayala. They were married August 5, 1972. Dick accepted a VP position with the Heinz Co. and he and Nubia moved to Pittsburg. While in Pittsburg, their son, George, was born. The next move was to Philadelphia Quartz Corporation. After several years, Dick accepted a new VP position with Dairylee Cooperative, moving the family to Connecticut. In his last three positions, Dick’s efficiency skills were used to streamline each company. Once his task at Dairylee was completed, Dick’s final action was to recommend that his contract be bought out. Basically, he fired himself with a nice bonus, which he and Nubia used to successfully open a small store until they moved to St. George, Utah, in 1992.

Life in St. George was a busy one. Dick’s membership in the Shepherd of the Hills United Methodist Church became an important part of his life as he volunteered for everything from gardening, to accounting, to being a Trustee. Tent camping changed to using a travel trailer to explore the Western United States. Fishing in both local lakes and streams continued to be a major passion for Dick. Dick was always busy with a new project, whether it was fixing up old trailers, renovating a classic car, managing properties, or projects around the home and garden.