RICHFIELD — It was a busy day in high school hoops with the teams making last minute preparations for region play, which actually begins Wednesday.

At the 2A/3A Preview in the Sevier Valley Center, Region 9 teams went 4-1 with Cedar, Pine View, Hurricane and Desert Hills all capturing wins and Dixie losing a double overtime thriller to Grantsville.

Canyon View also played, but lost, on the road and there were a couple of girls games Saturday as well. Here’s a look at the action from a busy hoops day around southern Utah:

It was an epic battle, especially for a preseason game, but the Cowboys incredible proficiency at the free throw line enabled them to pull out the close win vs. the Flyers.

Dixie started the game horribly, trailing 12-0 in the first five minutes of the game before Jake Hawes finally broke the ice with a reverse layup. But the Flyers rallied hard and finally pulled even early in the fourth quarter. For the rest of the fourth and in the two extra periods, it was nip and tuck.

Grantsville had long shots for the win at the end of regulation and at the end of overtime, but both caromed off the rim. The Cowboys did pull ahead early in both OTs, only to see Dixie come roaring back. Ultimately, the Cowboys clinched the win by making 36 of 40 free throws, an impressive 90 percent as a team.

The Flyers, playing without starting guard RJ Wilgar (minor leg injury), lost point guard Malachi Otis after he committed his fifth foul at the end of regulation and Hawes for the same reason in the first OT. Tyler Bennett, DHS’s top scorer on the night, fouled out in the second OT.

Braden Sandberg had 27 for Grantsville and made all 12 of his free throw attempts.

Dixie, 2-1, is at Hurricane Wednesday night to open the region season.

James Bennion is the battery that makes Hurricane go and he was fully charged Saturday afternoon in the Sevier Valley Center.

Bennion, a senior shooting guard for the Tigers, made five 3-pointers and tallied 21 points as Hurricane blew out Emery. At one point in the third quarter, Bennion tossed in three treys and a 90-second span to help change a close 26-23 game into a big 39-28 Tigers advantage.

“Bennion is definitely the catalyst to our team,” HHS coach Todd Langston said. “When he’s shooting well, we play well and feed off of him. He’s learned to go to the basket this year, plus shoot the ball from outside, so we definitely need James on the floor.”

Hurricane also got a nice lift from Jayden Long, who is recovering from a broken wrist suffered playing football for the Tigers. He came off the bench to toss in 12 points and had 11 of those points during a key stretch late in the third and early in the fourth.

Emery had pulled to within 42-37 on the sharp shooting of Tai Justice. But long came in with a spark of energy and the Tigers went on a 17-3 run that started with a minute left in the third and ended on a Long layup with just under four minutes to play. The five-minute put the Tigers comfortably ahead at 59-40.

“It’s a lot of fun to come here and play some teams that we typically don’t get to play,” Langston said. “Also, it’s a good experience to get away from Hurricane and stay up here as a team for one night and bond. It’s a lot of fun for us.”

Hurricane had not won at the 2A/3A preview until Saturday, which made the experience even better for the Tigers.

A poor shooting night nearly doomed the Panthers, but Jed Newby helped save the day in Saturday’s win over the Lions.

Pine View made just 7 of 25 shots in the first half and only shot 56 percent from the line in the game. But Newby was solid. He was the only Panther to hit more than 50 percent of his shots as he sliced his way through the Payson defense for 16 points on 5 of 9 shooting.

Newby also grabbed seven boards and was the X-factor for Pine View, which seemed sluggish on the second day of the tourney.

Pine View actually trailed 25-22 at the half and held a slim 41-38 advantage heading into the final quarter. In the final stanza, the offense continued to struggle for PVHS, but the defense was magnificent, allowing just one field goal and a total of four points in the final eight minutes.

The Panthers did shoot the 3-ball well in the second half, with Garrett Bowker hitting two and Newby and Steve Bangerter also burying long balls.

PV trailed 29-24 in the third when back to back treys by Newby and Chaz Peterson gave the Panthers a 30-29 lead.

Pine View goes to 3-0 on the season and will play at Snow Canyon in the region opener Wednesday night.

Dallin Jasperson led Payson with 12 points. The Lions are 2-3.

The Thunder overcame an icy start to blow past the hometown favorite Wildcats in the late afternoon game at the 3A Preview.

D-Hills scored first on a 3-pointer by Marcus McKone in the first minute of the game — and then didn’t score again the rest of the quarter as Richfield built a 10-3 lead.

But Quincy Mathews and Austin Adams warmed up in the second quarter and by halftime, the Thunder held a 19-17 lead. Things got even better in the third quarter as McKone hit a couple more treys to help Desert Hills pull away.

“We didn’t shoot the ball well early,” said DH coach Wade Turley, whose team made just 6 of its first 24 shot attempts. “But we made our stand and our comeback by playing good defense. I think we held them to single-figures in two or three of the quarters.”

DH outscored Richfield 16-7 in the second and 14-8 in the fourth quarters. D-Hills held Richfield to 29 percent shooting in the game, allowing RHS just 14 of 48 from the floor.

The two big guys, Mathews and Adams, finished with double-doubles. Mathews had 16 points and 10 rebounds and Adams had 15 points and 11 boards.

DH dominated the glass,m out-rebounding the Wildcats 33-22. The Thunder also shot well from the line, making 10 of 14 freebies.

Desert Hills improves to 2-1 with the win and will open region Wednesday night with a home game vs. Cedar.

The Redmen rebounded from a loss on Friday to knock off the defending state champs on the second day of the 3A Preview at the Sevier Valley Center.

Cedar improved to 2-2 with the win and Kyle Wood continues his excellent senior season with 16 points in the win. Wood is averaging 17 per game this year.

Morgan led 25-22 at the half and held a slim 35-34 edge after three. But Cedar flipped the script in the fourth quarter by outscoring the Trojans 20-12 in the last eight minutes.

Ben Brown, who had 11 points in the game, made a bucket to open the fourth to put Cedar ahead 36-35. Wood followed with a steal and a 3-pointer to make it 39-35 with less than a minute gone in the fourth. The Redmen would not trail again and built the lead to as many as nine points.

At Spanish Fork, the Dons rolled over the Falcons behind 18 points from Hunter Schofield. SF opened up a 10-point first quarter lead and were never headed.

Derek Dunnell had 17 for the Falcons, who fell to 1-1 with the loss. Keaton Kringlen added 12 points.

Canyon View has a region bye Wednesday and continues non-region play Friday with a home game vs. West.

The Lady Thunder led by nine after three quarters, but couldn’t hold the lead in the fourth quarter, despite the heroics of Kenzie Done, who had 18 points, 12 rebounds and 5 assists.

Ashley Beckstrand 17, 6 and 4 herself, but Granger’s Jessica Matheson led all scorers with 22 points.

The defending 3A champion Thunder fell to 2-3 with the loss. DH opens region play with a tough Cedar squad Tuesday night at CHS.

It was a rough offensive night for the Lady Reds, who managed just 11 points after halftime. It was a close 28-25 game at intermission.

Courtney Morley was the top scorer for CHS with 7 points and 10 rebounds. The Reds play at home vs. D-Hills Tuesday night in a key early region battle. 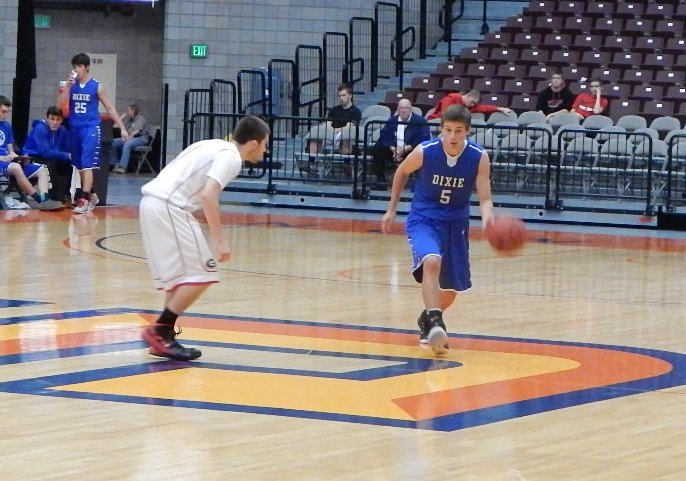 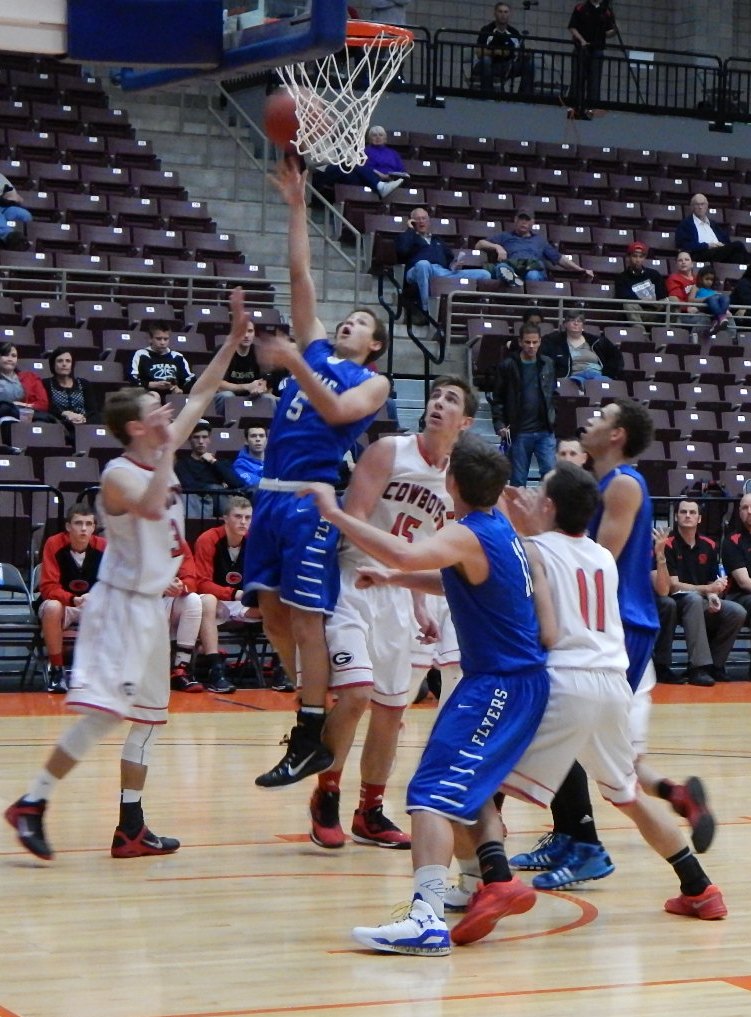 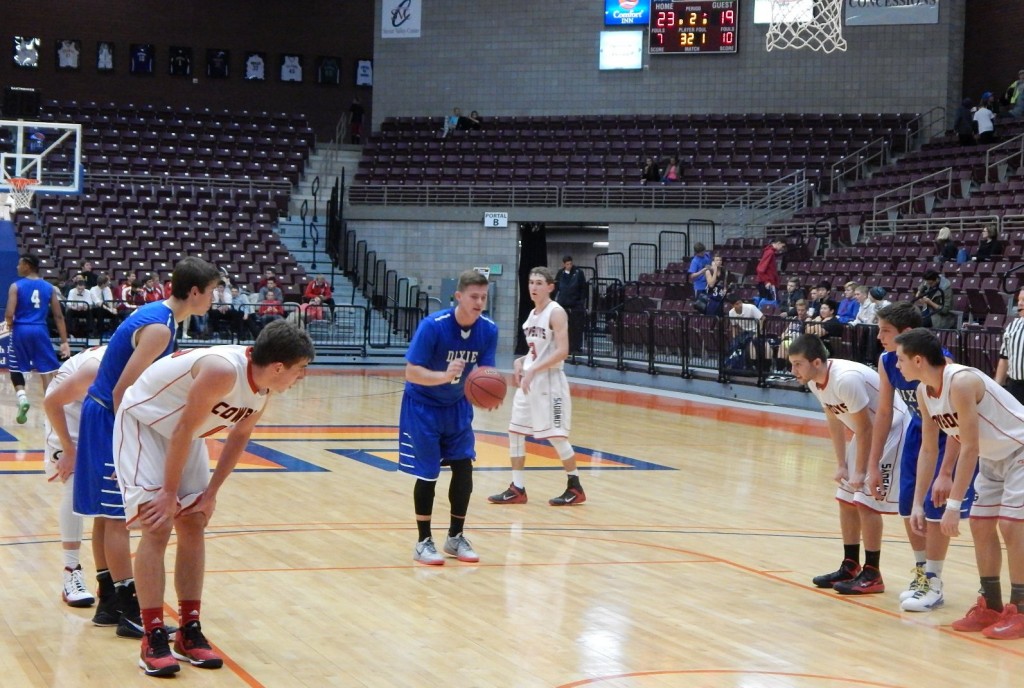 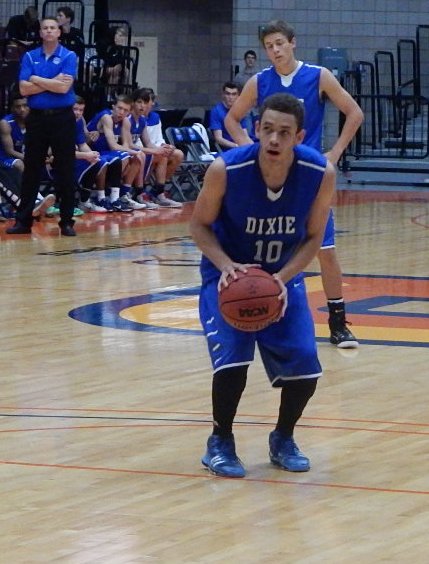 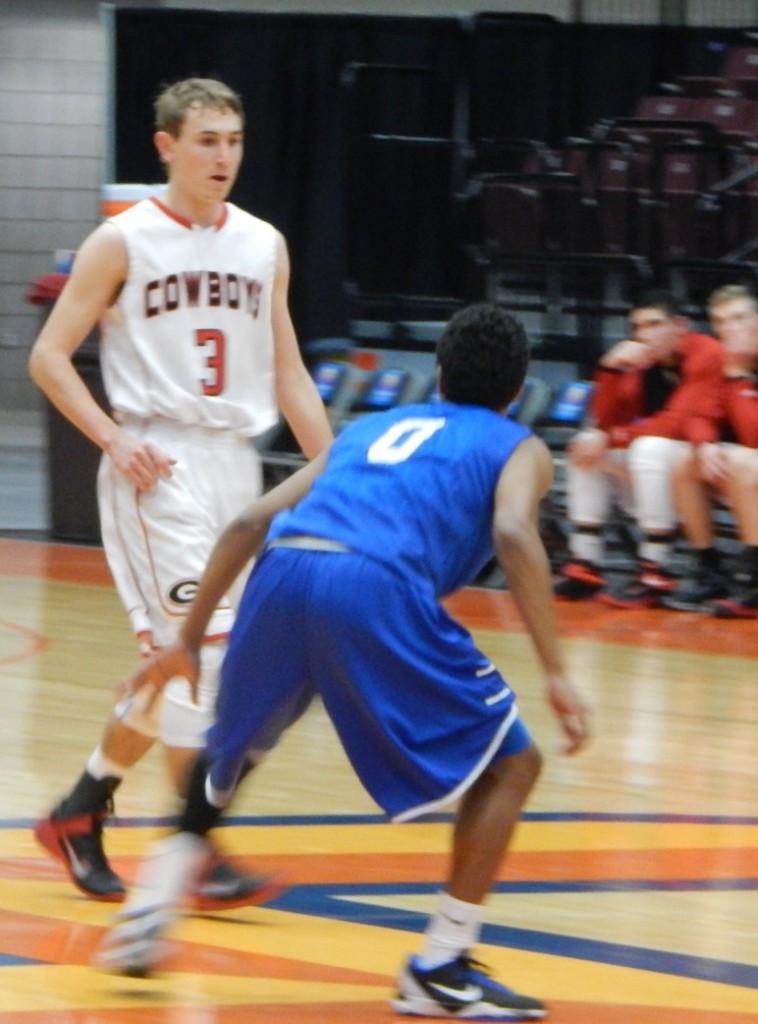