ST. GEORGE – Despite what proved to be a false alarm that caused an evacuation at the start of the evening, the DSU Holland Centennial Commons Zion Room was animated with chatter Thursday night when students, faculty, staff and community members came together to actively work toward establishing attainable strategic planning goals for the university’s future.

The large room was furnished with round tables that seated up to eight people per table. At the center of each table was a giant, blank piece of paper and two oversized markers. Each place setting included two pieces of paper – one with an agenda for the evening and another with five questions the university posed to attendees to encourage fruitful discussion.

The evening began with a PowerPoint presentation that was quickly interrupted by the sounds of sirens and robotic voices urging the building’s occupants to quickly make their way to the closest set of stairs and evacuate the building. Campus police and the St. George Fire Department quickly determined the alarm was nothing more than a sensor that had been disturbed in a duct somewhere on the first floor of the building, and the meeting resumed once again.

John D. Welty, senior associate with Penson Associates Inc., the strategic planning firm that was hired to help develop the strategic plan, led the activities for the evening with an overview of what the planning process would look like as it continues to progress.

Speeding his way through the slideshow to try and make up for lost time, Welty highlighted what community members should expect from university leaders and the American Association of State Colleges and Universities, also explaining what they hoped to get from the public.

The development phase of the project has a seven-month trajectory, with a final unveiling and celebration of the completed plan slated for June 2015. Between now and then, Welty said, collaboration between the university leaders, students and community members will be essential to building a successful plan.

“Creativity will be very important, and that’s one of the reasons that we rely upon so many people –  is to really think about new opportunities and new ideas,” Welty said.

Identifying DSU core values and establishing goals that will help direct the course of action for university leaders through the next four to five years must be a cooperative effort, he said, and must have importance to those impacted by the plan so all stakeholders have an ownership in it.

“It’s important that the planning process be positive and optimistic (and) that we look at what we can take advantage of,” Welty said. “And it’s most important that this plan is not a plan that I develop but that the campus develops, so that they are going to own that plan and be responsible for implementing that plan.”

Welty talked about “blue ocean thinking” as opposed to “red” thinking – meaning the goal of the plan is not to align the plan with the status quo, but rather to leap beyond the established molds and carve out a new path that others will recognize as valuable and unique and work to follow.

Participants were encouraged to think big when considering future goals, and big they thought. Attendees gathered together in groups of five or more people, and the brainstorming session became a fervent whirlwind of ideas and excitement.

Each group chose a scribe, a question from the list provided by DSU leaders and a spokesperson to share with the larger group when the brainstorming session was over, then all feverishly went to work on matters like DSU’s identity, branding and program expansion.

Many touched on how important it is to keep Dixie students from leaving to finish their degrees at another institution. Others pushed the concept a step further by asking how DSU could help to foster deeper connections between university students and the community, in hopes of keeping graduates engaged enough in Southern Utah that they’ll want to stay and invest their recently acquired knowledge back into the community.

One group pointed out that the university should place more emphasis on environmental science programs that draw from the geologically diverse region that is Southern Utah.

“Where else in this country do you have what we have right here in our own backyard?” the group’s spokesman asked.

Playing on the same theme, it was also suggested that DSU could work harder toward creating a completely “green” university campus by building on future sustainability options and possibly rippling out into the diversification of recreational opportunities and programming.

DSU President Richard B. Williams said the school’s last strategic plan culminated with Dixie State gaining university status. As DSU catapults forward into the next era of education, establishing a strong strategic plan that will build on the enterprising work of his predecessors has become an important motivator in his presidency.

“When I became president, I saw that every component of that strategic plan had been realized,” he said. “So now we have this new purpose of becoming a very mature university and identifying who we are and what we want to become.”

More information about the DSU strategic plan is available here. 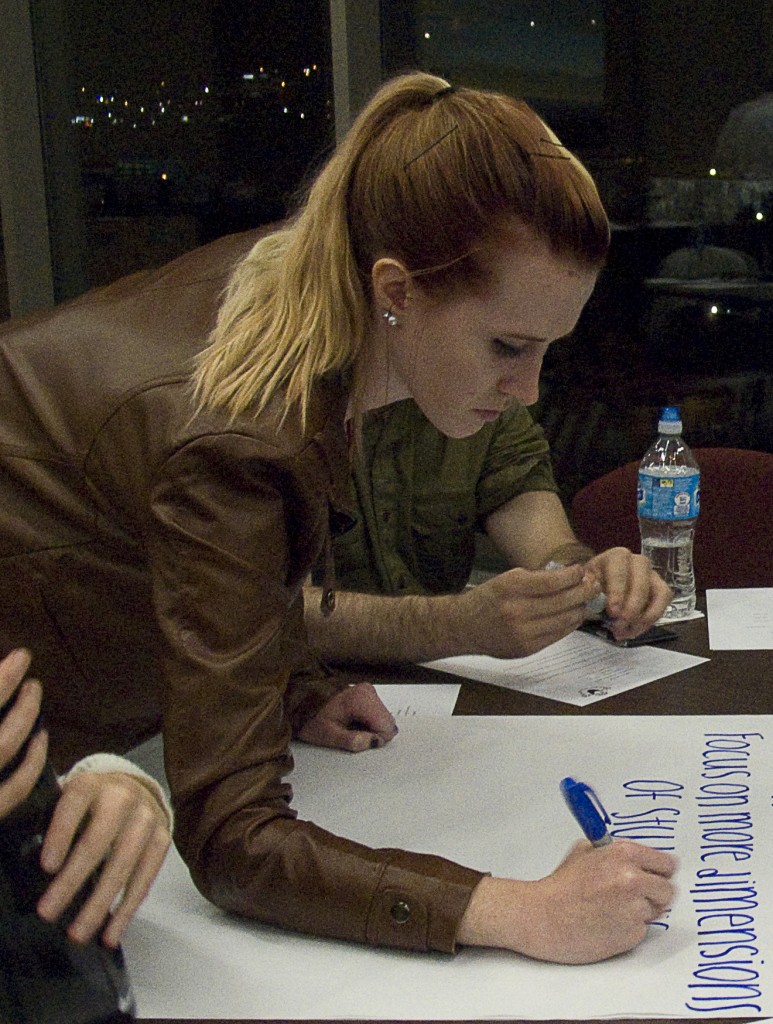 Scribbling ideas as fast as they come, one DSU student takes notes while others in her group share their ideas, St. George, Utah, Dec. 4, 2014 | Photo courtesy of Carin Miller, St. George News 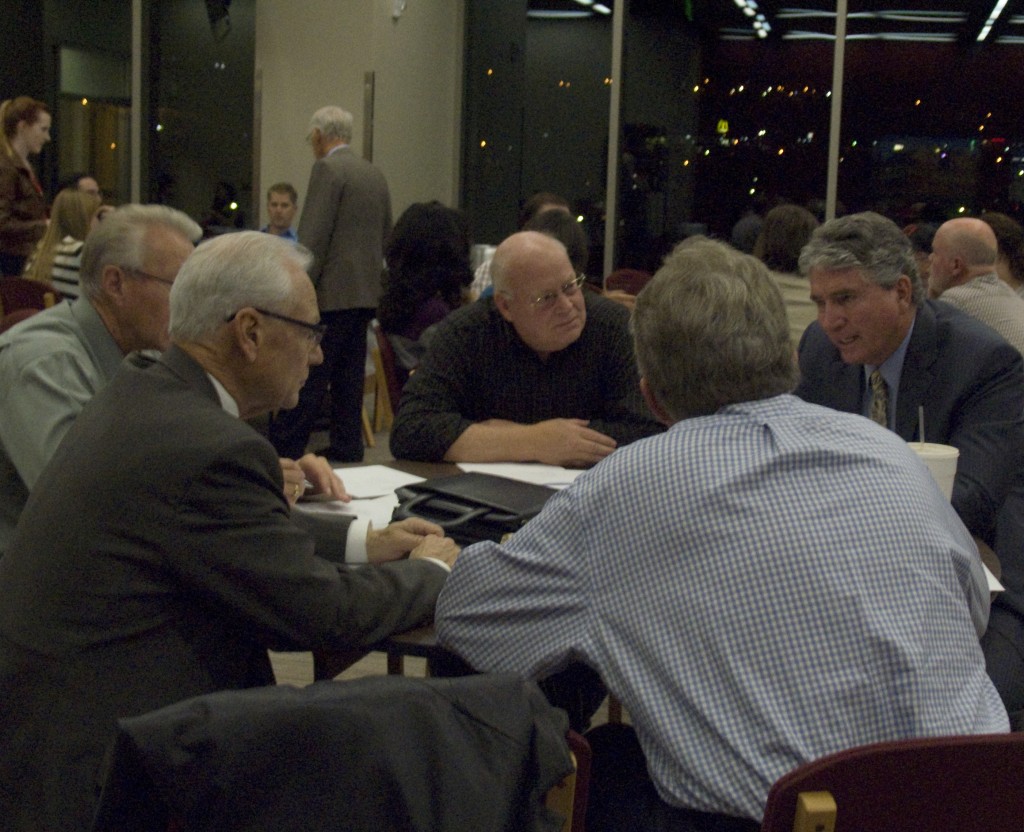 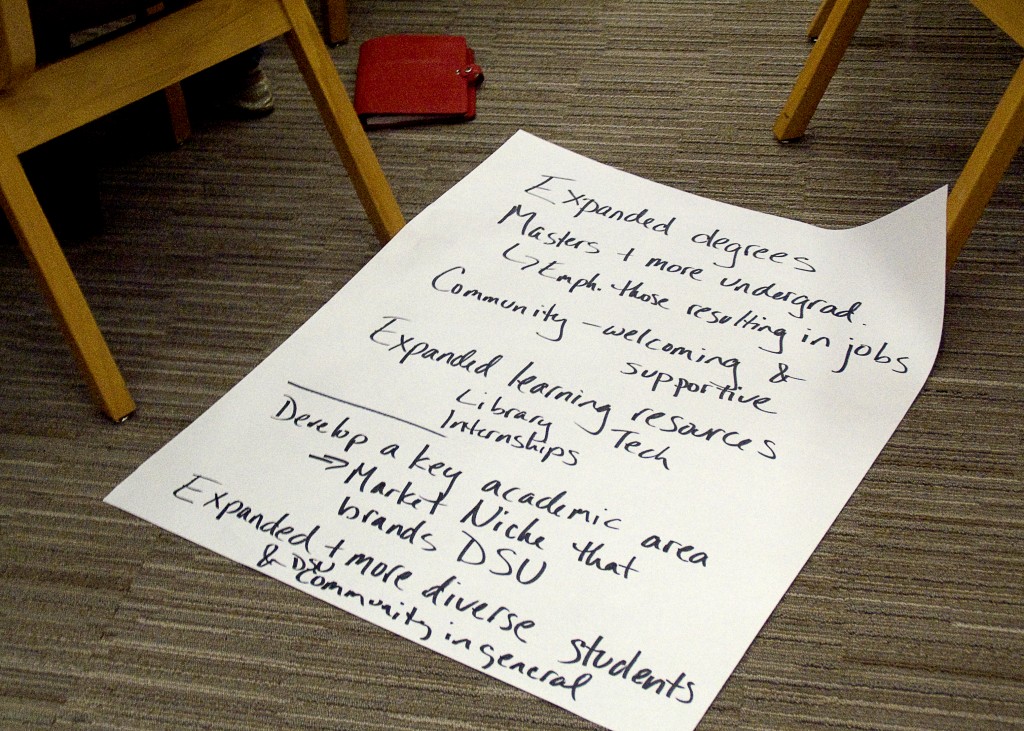 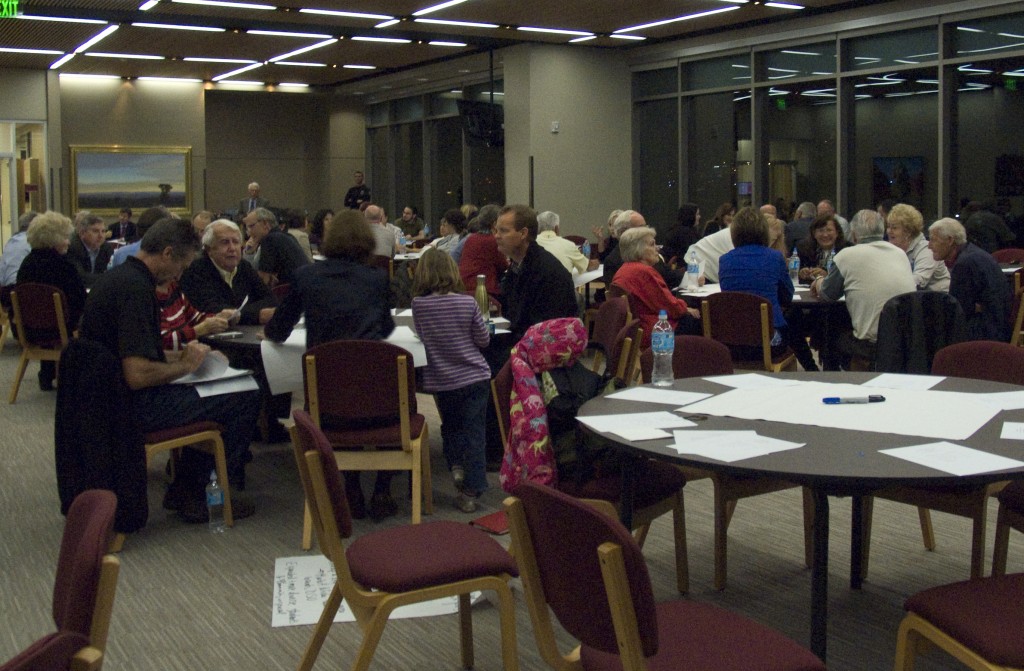 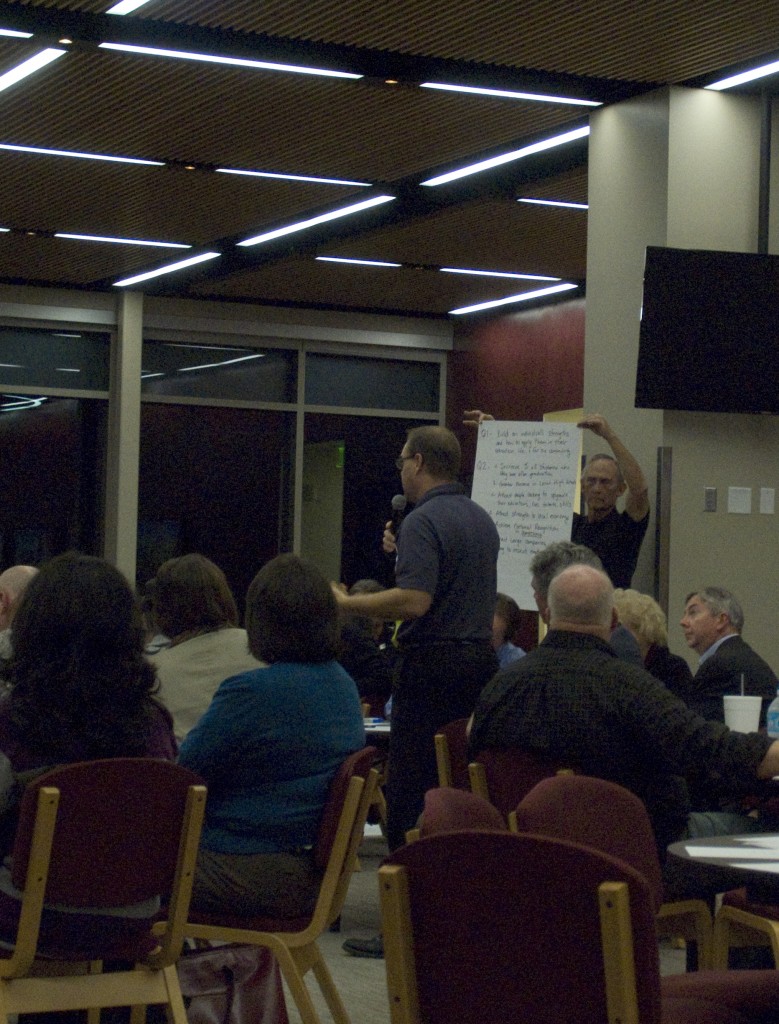