Just after 11 a.m., Ultimate Detailing Manager Brett Fife and employee Nicole Morgan had just made their first stop of the day to wash cars at Red Rock Auto Sales, located at 176 W. St. George Blvd., when their day took a turn for the worst.

“The pressure washer was bogging down and so I called to Brett for fuel,” Morgan said. “He went and was putting in some fuel and some of it dropped onto the muffler and boom it started on fire.”

Fife was holding the gas can when it ignited, which burned his right fore arm, and he said he dropped the gas can and started to try to pull the pressure washer out.

“It was like being in Backdraft or something, when the guy opens the door and it’s just a huge wall of flames,” Fife said, “except, without the door.”

In order to get out of the trailer, Fife had to jump through the flames which singed his beard and melted his fleece pants.

“I was crying. I ran and grabbed a hose but there was a hole in it. That’s what all that water is over there,” Morgan said pointing to a lengthy puddle. 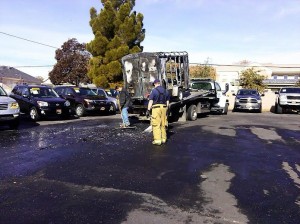 There was some concern that the flames may have reached the power lines but they were undamaged, said St. George Fire Capt. Clayton Hullinger.

“We knocked the fire down within a couple minutes,” Hullinger said. “We used one and a half hose line and about 400 gallons of water.”

Three vehicles in the lot were slightly damaged from the heat of the flames. The trailer was towed.

“I’ve never experienced anything quite like that,” Fife said. “I guess you never know exactly what it would be like until you’re jumping out of a burning trailer.”

This report is based on preliminary information provided by responders on scene and may not contain the full scope of findings.