COMMENTARY — It was 1993 and I was a young sports writer with just my second newspaper job out of college. I was the Spectrum’s “Cedar sports guy,” tasked with covering Southern Utah University and Cedar High sports.

I was pretty smug in those days. I had won numerous column and feature writing awards in college and had been hired by the Salt Lake Tribune to cover the Utah State Aggies while just a sophomore at USU. The Trib sent me up to Idaho when I got my degree and I was covering Pac-10 football as well as Big Sky sports while in my mid-20s.

It was pretty heady stuff and I thought I had things figured out. But I didn’t like northern Idaho (cold and cloudy — yuck!). So my wife and I took the Spectrum job and moved to Cedar, where I got to know the inimitable Jack Bishop (he was the SUU football coach at the time) as well Bill Evans, Steve Hodson, Steve Rollo and other Cedar City movers and shakers. 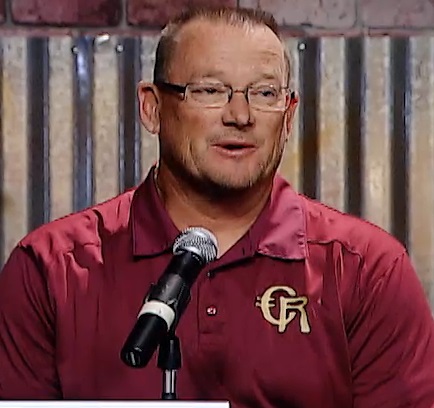 The first time I met Peacock, it was a glorious August afternoon in Cedar and the Redmen, under young Peacock, were practicing in the bright sun. I had participated in hundreds of football practices as a player and observed many more as a sports writer. I had watched LaVell Edwards, Chuck Shelton, Charlie Weatherbie, John L. Smith, Mike Price and many other coaches conduct practices, but none of them did it like Peacock.

First of all, the players and coaches were having fun. I mean, a lot of fun. They were laughing and joking and enjoying the fact that they were playing a game. Peacock was enthusiastic, jumping in occasionally to demonstrate to his players the particular points he was trying to make. The kids loved that, getting to hit coach, who obviously was wearing no pads.

Don’t get me wrong — other coaches had fun practices occasionally. But this was different. Peacock was one of the guys. There was an amazing camaraderie there.

Then something happened that I will always remember.

“Let’s work on kickoffs,” Peacock hollered, and the kickoff team lined up to run the drills. And then the Redmen worked on onside kicks. For 30 minutes.

Every coach knows that practice time is incredibly valuable. A coach only gets so much time each week to work with his team, implement a game plan and try to get the offense and defense running like clockwork. For most of the coaches mentioned above, and most other coaches I’ve known over the years, special teams is a bit of an afterthought. It’s something you run at the end of practice. A necessary evil, if you will.

And if a coach carves out time for special teams, it will likely be the field goal unit. Or kick returns. Or deep kickoffs. I mean, nobody spends that valuable practice time on onside kicks.

Well, nobody except Todd Peacock.

I asked him after practice about the unusual emphasis in that particular play.

“You never know when you might need it,” he said, with a knowing smile and a twinkle in his eye.

As it turned out, Peacock and his team used the onside kick with regularity. They practiced it because it was a big part of the Cedar game plan. Peacock once told me that the other team can’t score if they don’t have the ball. Often using all four downs, rather than punting, plus the onside kicks and the ball-control offense, Cedar’s main goal was always to keep the other team’s offense on the sideline, sipping Gatorade and hoping for a stop that ofttimes never came.

I haven’t been to a Cedar practice in years. I don’t know if he still works on that kind of thing, but I do know the region will have less color, less flavor and less quality with Peacock no longer on the sidelines at Cedar games.

Peacock resigned/retired earlier this week and that makes me sad. He always told it like it was. He had no use for modern innovations like cell phones, the spread offense and zone blocking. People call me “Old School AG,” but Peacock was the real Old School guy.

He wasn’t a big fan of talking to the media, so I consider myself lucky to have had several meaningful conversations with him over the years. He knew me when I was skinny. I knew him when he had more hair.

His job was unenviable and nearly impossible. The Redmen had a murderer’s row of games each year. Cedar played all four of the 3AA semifinalists this year, including twice against Pine View. The Redmen won at Skyline this season and battled Hurricane and Snow Canyon to the final gun in close losses. Cedar captured a big road win in the first round of the playoffs, beating Tooele by 12.

And though the season ended with that loss to Pine View, I have no doubt Peacock and his staff got the most out of his players.

I haven’t talked to the coach since he turned in his keys — no cell phone, remember.

But know this: He will be missed.

The Redmen went 6-4 and made it to the state semifinals that first year I covered them. They ran the triple-option to near-perfection and used the onside kick at least once a game. It usually worked.

Peacock and his teams never got the Holy Grail of football, the state championship. He coached his teams to 142 wins (with 123 losses and one tie). But I believe he always got the most out of his kids. It’s a brutal coaching world out there, and Cedar will likely find out that replacing Peacock with someone as committed and as dedicated will not be easy.

Here’s to you, Old School Todd.

“This Week in Region 9″ is a weekly column written by Andy Griffin exploring the happenings in Region 9 at all sports venues. The opinions expressed are not necessarily those of St. George News.